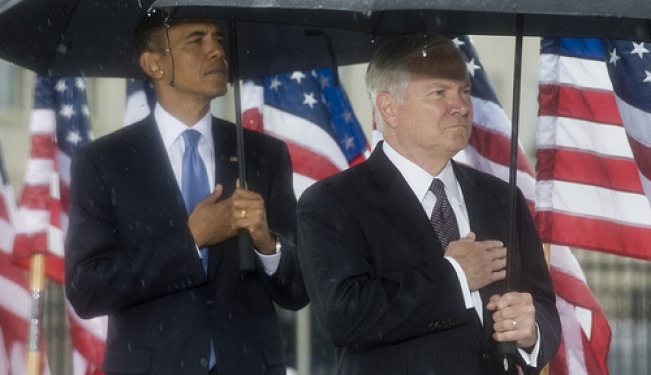 Recently, the US has embarked on a campaign which aims to link Iran and terrorism, of which the recent “Iranian assassination plot” against the Saudi ambassador in Washington is a part. However, these sorts of ideological battles rarely produce positive results, and in doing so, the US risks mobilizing Middle Eastern feelings against itself.

US allegations of a terror plot originating from Iran can be viewed as the beginning of an ideological war through the manipulation of the concept of terrorism in order to achieve US geopolitical goals. The main objective of this policy is to force Iran to change its nuclear policy and its regional stances in order to maintain the existing power balance in the Middle East. This US policy is likely to backfire because history shows that the perpetuation of ideological wars bring about an ideological counter-reaction, and are likely to jeopardize Washington’s geopolitical interests.

The strategy of using the war on global terrorism to preserve international and regional security was initiated during George W. Bush’s administration. This strategy stemmed from a Manichean ideological mentality, portrayed itself as a sacred and well-nigh apocalyptic war, and advocated the absolute victory of the United States and the West in Afghanistan and Iraq. Today, the prolongation of these wars in the region, which will not have either an absolute winner or loser, can be attributed to the ideological resistance of the opponents of the US such as the Taliban.

By accusing Iran of plotting the assassination of the Saudi Ambassador in Washington, the US is bracketing together Iran and global terrorism, and thus engaging in another ideological war. On the top of Washington’s agenda is a will to impose more stringent sanctions against Iran in order to force it to revise its nuclear policy and regional stances. During the past few years, the United States’ policies concerning Iran’s nuclear program functioned inside a framework of a ‘threat against global peace and security’, directed unsuccessfully via the UN Security Council channel. Washington has since come to the conclusion that this low-speed lane has failed to serve its goal of forging a global consensus to enforce tougher sanctions against Iran.

Iran’s nuclear program somehow enjoys a significant level of legitimacy among the people of the region and the global public i.e., among the Non-Aligned Movement states, which in addition to preserving its own interests, has restricted veto-wielding powers such as Russia and China in following Washington’s policy of pressure and sanction. Meanwhile, the possible failure of the US and its regional allies in changing the Syrian regime would empower Iran’s regional status and encourage it to stay on its current nuclear track.

At this juncture, connecting Iran to the issue of global terrorism could be a more efficient and convincing means of creating an international consensus against Iran. Reminiscent of the 9/11 terrorist attacks, the war on terror holds a high and sensitive position in the eyes of the US and Western publics. This explains the Obama administration’s policy to keep US troops in Afghanistan up to 2014, in order to mobilize the American public to support the battle against al-Qaeda and the Taliban.

From the perspective of the Obama administration, focusing on the issue of terrorism in dealing with Iran can potentially expedite the creation of a global consensus against Iran’s nuclear program. Russia and China, trying to act as responsible global powers, may show less resistance to such a policy.

The US has already laid the groundwork for relating the two sensitive issues of “terrorism” and “nuclear threat” by portraying the concept of “nuclear terrorism” as the main threat to US and global security. In this context, by excluding Iran (and North Korea) on the issue of US nuclear confrontation and deterrence raised in the 2010 Nuclear Posture Review (NPR), the Obama administration attempted to keep the pressure on Iran by connecting the two issues of Iran’s nuclear program and global terrorism.

But Washington’s new ideological war in the context of terrorism may trigger Iran’s ideological reaction. The US’ key objectives in the Middle East have been to preserve the balance of power, guarantee energy security, and acquire further geopolitical interests through dominating the existing political-security trends and confronting ideological movements.

The US’ ideological threat against Iran may actually backfire by reinforcing anti-American ideological movements such as Hezbollah and Hamas, Iraqi Shia factions, along with the diverse range of forces which participated in the Arab Spring against largely Western-backed authoritarian regimes. Iran will thus be encouraged to strengthen its coalition with them in order to confront the common threat. This new situation will surely endanger US geopolitical interests in the region.

Locally, the terror plot has been backed by Saudi Arabia. Tougher sanctions against Iran while avoiding war is the exact point at which Washington’s and Riyadh’s interests converge. However, the support of Saudi Arabia, a country which recognized the Taliban regime in the 1990s and recently dispatched its military forces to crack down on the pro-democracy protests in Bahrain, fueling the Shia-Sunni enmity in the region, will not give the policy the necessary appeal for the region opposing additional punitive action against Iran.

Just as George W. Bush’s “Axis of Evil” policy, the Obama administration’s new ideological policy aiming to link Iran and terrorism will be perceived by Iranians as a “national threat,” one which will ultimately reinforce solidarity in Iranian society to resist greater external pressures. The strong domestic reaction from numerous Iranian experts, academics, and intellectuals against the US, rejecting Iranian links to the terror plot, is a vivid example.

By linking Iran to the issue of terrorism, the Obama administration has started a dangerous game. Further insistence on this policy can increasingly complicate the existing political and security challenges in the region at a time when the US is planning to withdraw its troops from Afghanistan and Iraq. This game can endanger the interests of all parties involved, and at the present juncture, is the last thing the Middle East needs.