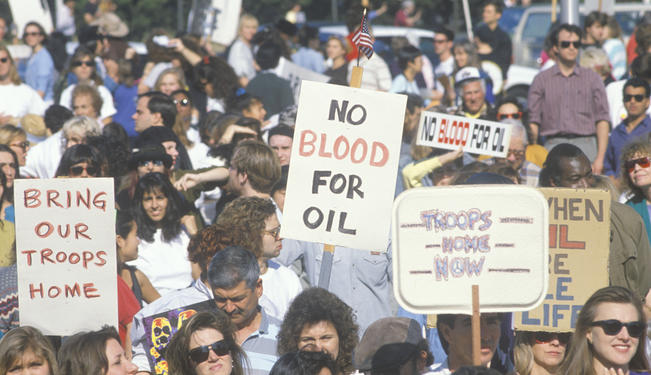 The discourse of opponents to a military strike on Syria fell into the trap of cultural imperialism.

The threat of a military strike on Syria has not aroused the enthusiasm of many. It has succeeded, however, in bringing the Syrian revolution to the discussion table. Until now, Syria has been notably absent from the list of priorities on the Western agenda, apparently a matter of little interest to governments and public opinion alike, to both the left and the right.

For the past two and a half years, the Syrian revolution did not manage to entice Western governments to push for an end to the tragic spiral of events. As long as each of the opposed parties in the Syrian conflict lack the capability and volition to ensure Western interests in the region, why make the investment of interference? Such was the gist of General Martin Dempsey’s remarks on the Syrian situation two days before the Ghouta massacre.

Such indifference, however, was not exclusive to the governments of United States and European countries. Public opinion similarly lacked interest in the tens of thousands of deaths as well as the destruction of cities and villages. It was not until death in Syria crossed one of the West’s red lines — by showing evidence of the use of chemical weapons — that the Syrian people became a matter deserving of interest. At that point, the warships moved into position. Meanwhile, anti-war sentiments and commentary opposed to Western military intervention moved against them.

I am not concerned here with sorting out those who supported the strike from those who protested it. I am also unconcerned with the right-wing arguments put forward in this context that combined hatred for the Democratic Party with Islamophobia to end up with what is practically a defense of the Syrian regime. Rather, I am concerned with the debacle that came to painful light through the positions taken and discussions had by those on the left side of the political spectrum in reaction to the threat of a Western military strike on Syria.

Among the first to throw this debacle into sharp relief were the political activists who participated in anti-war protests and, in doing so, received a double blow. On one side, they saw themselves standing side-by-side with people holding up pictures of Syrian President Bashar al-Assad and, on the other side, they were surrounded by general anti-imperialism slogans without any particular relation to the Syrian people.

The real tragedy, however, does not lie here. The sight of anti-war demonstrations drawing together sections of the far-right and far-left is familiar. The real tragedy emerged through the discourse that came, in the end, to dominate the left-wing opposition to the military strike. This discourse took its vocabulary from the tracts of the far-right and, instead of turning its guns on imperialism, turned them on the Syrian people.

Indeed, a kind of role-reversal occurred between imperialism and its enemies. President Barack Obama did not exactly wear himself out by designing an ideological banner for his next war. This time, there would be no “battle for democracy” or war in the name of “freedom for Afghan women” — not even “freedom for the Syrian people.” Rather, this would be a war about American “red lines” and “national security.” Here, imperialism appeared totally bare, stripped of its characteristic self-presentation as the gate of redemption for the peoples of the world.

To find a discourse singing this familiar refrain, one must move to the opposite side, where important anti-war left-wing activists and thinkers have taken it upon themselves to promote the “white man’s” ideology, having paradoxically borrowed and redeployed an imperialist discourse in the name of fighting imperialism.

The Trap of Cultural Imperialism

They do not object to the idea of using the military strike to redeem the Syrian people. Rather, they object to it on another basis: The revolutionary Syrians do not deserve to be redeemed because they have not proven their radical qualifications and secular-democratic orientation, so we should not interfere on their behalf. In making its case against military intervention, the discourse of opposition to the military strike thus fell into the trap of cultural imperialism when it thought it was standing against military imperialism.

Perhaps most disturbing of all, some have attempted to “apply” the 2003 invasion of Iraq to the Syrian situation, or at least read the latter through the lens of the former. It has evidently escaped this group that the very same discourse at the core of George W. Bush’s ideological mantra has been reconstructed to the letter by the Syrian regime and its allies. It has gotten to the point that you can find a full sentence from one of Bush’s speeches on the war against terror in the mouth of either Hezbollah’s secretary-general (who, at long last, is obsessed with the “takfiris”), or select leaders of the secular Arab-left. In the name of resistance to the military strike, the Bush discourse thus flutters between lines spoken by leftists who fought the Iraqi invasion tooth and nail. Perhaps the neoconservatives’ spirit has finally possessed them.

It was the same imperialist trap that pushed other leftists to switch over to the call for peace. Theirs is an auspicious call, yet surprising in that it comes directly after the moment chemical weapons were used, as if whoever wielded them is asking the victims to embrace Sarin gas after inhaling it. The sense of surprise does not last long upon realizing that these are peaceful calls of despair from all that moves on Syrian soil. Perhaps those who sounded this call do not see a need for a conflict to begin with, so long as those fighting in it do not match the profile according to the imperialist catalog itself.

The danger of the global left’s discourse in its many permutations is not only that it dons imperialist garb in making its supposedly anti-imperialist argument, but that its logic betrays its opposition to any sort of interference whatsoever — whether imperialist or otherwise, under UN auspices or not, in or out of line with international law.

The issue here is not one of sorting the “good leftists” from the “bad leftists.” I do not think that such a categorization is possible, anyway. However, I am haunted by a question: What makes a sincere leftist discourse slip into becoming a retouched version of the Islamophobic right? It seems that there is an elephant in the room. Is it the ghost of the Soviet Union? Euro-centrism? Priorities of geostrategy?

I do not know what the elephant is. But I know the ant. I know that the Arab revolutions, since their beginnings, were revolutions without specific promises and claims. They were revolutions against oppression and injustice more than they were revolutions aimed at implementing premeditated programs and ideas. To borrow from Walter Benjamin, these are “revolutions nourished by the image of enslaved ancestors rather than that of liberated grandchildren.”

Perhaps, in this meaning, a revolution like that which has emerged in Syria has not emerged in the other Arab countries. The revolutionaries of Syria appear in this game to be effective subalterns: those who do not have a voice and who cannot speak to Western academic circles, even the left-wing ones among them. Mount Qasyun alone hears their voice and awaits their arrival, no matter how long it takes.

*[Note: This article was originally published by Jadaliyya. It was first featured in Arabic on Jadaliyya, and translated to English by Angela Giordani.]