Student loan debt has deservedly become a major political issue in the US, with the total debt burden approaching the impressive figure of $1.6 trillion. The phenomenon has revealed many of the structural problems American society is now attempting to address, with little hope of a viable solution.

Aarthi Swaminathan, writing for Yahoo Finance, examines some of the serious dirt that has contributed to building what she calls a “muddy system.” She looks at the case of a woman who, at the age of 51, finds herself saddled with a debt of $100,000.In 1997, Annette Gunn graduated from Southern Wesleyan University with a clearly unmanageable debt of $60,000, given her lack of prospects for lucrative employment. Her circumstances made it impossible for her to meet the conditions of a standard repayment plan. Since then, according to Swaminathan, “she’s been in limbo — in the form of forbearance and deferments — due to various financial and bureaucratic issues over time.”

In the realm of student debt, an act of superficial generosity and restraint by a loan agency that, through the temporary postponement of cruelty, allows it to consolidate and magnify the level of cruelty that the agency will apply at a later date, while at the same time radically reducing the margin of maneuver of the person benefiting from the act of forbearance

Most student debt is repaid over time — often decades — through regular payments. In theory, this plays out smoothly thanks to the superior earnings college graduates expect to receive as the main benefit of their investment in a diploma. But for an increasing number of former students, instead of unlocking their path to financial success and personal security, their investment in the future turns out to be worse than a bad dream. It ends up poisoning their waking existence and undermining their capacity to construct a life project.

From the point of view of not only loan agencies but even universities, the purchase of an education has turned into a scam that has reduced generations of young professionals to a state of debt peony. The former top student loan official A. Wayne Johnson — a Betsy DeVos appointee under President Donald Trump — recently resigned from his post with this comment: “We’re dealing with an abomination that’s in plain sight.” Johnson then described in greater detail the character of the abomination: “A lot of people caught up in full-blown despair. I mean, any system that winds up with people committing suicide to have to get out of is a problem.”

The loan services never bother to inform the students or their families that the expensive education they are paying for is a high-risk investment. Why should they? The official culture of the US as an enlightened democracy has maintained the idea that education is about the advance of knowledge and the broadening of the citizenry’s culture, rather than merely the hope of a superior level of future income attached to a piece of paper called a diploma. With student debt, the hope itself becomes a need and a need that remains increasingly unfulfilled.

In reality, the cynical commercial culture that has achieved total dominance in recent decades willingly maintains the belief in the university’s vocation of enlightenment simply as a means of hiding their real motivation: the fact that everyone involved — the universities, the loan services and the students — is seeking financial advantage.

The “generous” loan system has turned universities into classically managed for-profit enterprises benefiting from the availability of loan cash to sell a consumer product: diplomas. This means cutting costs and veering toward the logic of mass production. Only the poorly-paid adjunct professors continue to believe in their role of spreading enlightenment. But, of course, they lack the means to reinject it back into the culture of the enterprise their university has become.

This has created an El Dorado for loan services, who have customers hooked for a lifetime and, thanks to the legislation concerning student loans, protected from the eventuality of personal bankruptcy, which the law largely forbids.

This provides the ideal context in which forbearance can come into play. Only a minority of students receive the level of compensation that allows them to easily pay back their loans. Instead of finding the high-paying jobs they expected following graduation, many students have no choice but to settle for employment in basic service jobs paid at subsistence wages.

In the case of Annette Gunn, her debt of $60,000 has now nearly doubled 22 years later, while her personal financial situation has remained precarious. Without forbearance, she couldn’t have survived. The Yahoo article offers a peek at the dismally cynical techniques used by Navient, Gunn’s loan servicer: “The Consumer Financial Protection Bureau (CFPB) recently called out student loan servicer Navient for allegedly pushing borrowers into forbearance instead of income-based repayment, adding billions of dollars in interest on top of their existing loans.”

A quote from a Navient executive reveals that, rather than appearing as an understanding response to a debtor’s difficult situation, Navient uses forbearance, very literally, as a weapon to victimize their clients: “Our battle cry remains ‘forbear them, forbear them, make them relinquish the ball.’” This executive’s language tells it all. They are at war with their borrowers and require a “battle cry” to effectively motivate their strategy of cruelty. Then there’s the metaphor from competitive sport. Borrowers are opponents who must be brutalized until they “relinquish the ball.”

Despite Johnson’s remark, suicide is not the only answer to debtors’ angst. One former student, Chad Albright, made the news recently by fleeing to China at the age of 30 to escape the burden of student debt. Sam Ruland, writing for USA Today, explains that “it was drilled into Albright’s head that college would lead to success.” Concerning the coveted diploma, Albright explained, “Everyone always told me it would be worth it.” It turns out it wasn’t.

Ruland cites experts proffering what they believe is sound advice: “But students need to be more strategic in picking majors that will lead to jobs that can pay back their loans.” This is how the logic of consumer society works. Homo economicus is expected to fully understand the choices they are confronted with and assume all the responsibility for their choices. “It comes down to making sure students are aware of their options and being practical.” The same expert, Pennsylvania state Representative Dawn Keefe, gives no hint about how the students can “make sure” of their awareness.

Some may call this the negation of the American dream. But it’s more likely its fulfillment. The American dream was always there, not to inspire achievement, but to turn people into consumers creating pretexts for profit.

What happens when a word moves from the common language to the framework of the law concerning questions of ownership, credit and debt? The Cambridge Online Dictionary proposes a standard definition of the word “forbearance” as used at least since Shakespeare’s time: “[T]he quality of being patient and being able to forgive someone or control yourself in a difficult situation.” The Greek word epieikés is variously translated as “gentle, mild, forbearing, fair, reasonable, moderate” and appears in St. Paul’s letter to the Philippians (4:5) in the form of a moral concept: “Let your forbearance be known to all men.”

From its use as early as the 16th century with the meaning “a refraining from the enforcement of something (such as a debt, right, or obligation) that is due,” forbearance evolved into a commonly applied practice of leniency concerning mortgages, “in which the lender agrees not to exercise its legal right to foreclose on a mortgage and the borrower agrees to a mortgage plan that will, over a certain time period, bring the borrower current on his or her payments.” In this context, the association with kindness and gentleness remains obvious. The lender allows the borrower to retain the title of the property that has not yet been fully paid for.

When the concept is applied to student loans, especially when the associated attitude of the lender becomes that of a “battle cry,” the notion of respect of the borrower’s interest disappears entirely. The borrower is a captive. Forbearance morphs into a weapon of attack on the person, the imposition of a debilitating handicap. Worse, the loan services calculate the long-term effect of forbearance to reach a maximum profit through what can only be called programmed usury. In the case of a mortgage, the borrower may escape the debt by abandoning the property. The law provides that only in extreme cases can student debt be forgiven.

This is just one sign among many that today’s consumer society is predicated not on the principle of providing for the well-being of consumers, but rather of treating them as anonymous victims of the pitiless logic of the system, one that has dismissed the notion of respect as inefficient and uneconomic. In the process, education itself has become totally devalued and educational institutions have increasingly abandoned the traditional goal of contributing to the intellectual wealth of the nation, broadening culture and enlightening responsible citizens.

The educational circus — administered by profit-minded managers and overseen by politicians and bankers — does teach us all one final lesson: that the consumer society is so dedicated to consumption that it has found efficient ways of consuming the consumers themselves. 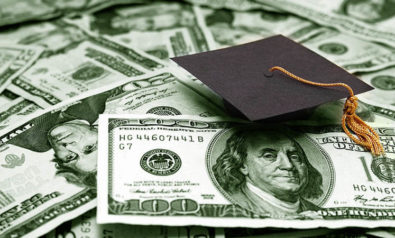 The Student Debt Crisis: Could It Slow the US Economy?