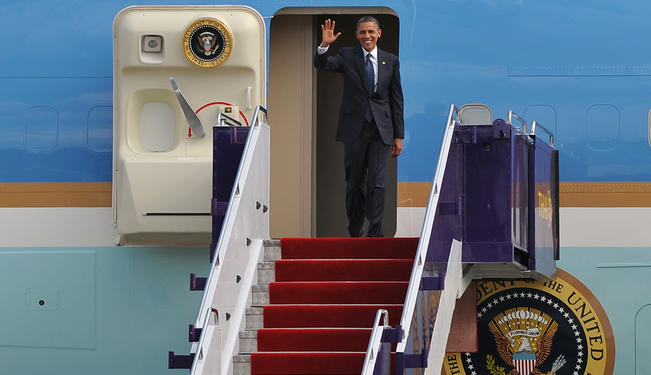 African leaders must recognize their continent’s importance on the global stage.

It was four years ago in the summer of 2009 when Barack Obama made his first trip to Africa as the US president. His stop? Ghana. For many people with little or no knowledge about Ghana, his choice of destination came as a big surprise. Then came the speculations; some hinted that a military base was to be created in Ghana, helping to further expand America’s military presence in Africa and around the world. Others, however, pointed at the increasing economic importance of Ghana on not just the African continent, but the world at large.

Ghana’s economy has been amongst the fastest growing in sub-Saharan Africa, thanks to its rich resources like gold, bauxite, timber and, of course, cocoa. Ghana is also a player in the oil exporting industry, making it a very attractive place for foreign investments — especially since it has a relatively stable democracy. Therefore, for any US president to choose Ghana as their destination, should come as no surprise to anyone with the slightest knowledge about the country’s strategic importance to the US agenda on the African continent.

Yet Obama’s visit was seen by many, including some Ghanaians, as a favor to the country. As one Ghana Embassy official in Washington DC put it: “If you do good, the whole world sees it and Ghana is been recognized by the United States for her good actions.” Such a perspective completely disregards the country’s and the continent’s contribution to the rest of the world from economic prosperity to global security, and rather depicts Ghana and Africa as a mere recipient of US and Western aid.

For many Ghanaians and Africans alike, Obama’s visit was a special moment of pride and jubilation. While some were proud of the fact that one of “their own” could become the leader of the free world, others went a step further to see Obama as the “messiah.” With this came the expectations: the long awaited savior of the free world, who was going to end Bush’s war policies that alienated the US from many parts of the world. Also because of his patrilineal ties to the continent, it was hoped by many that Africa would be on top of Obama’s list, thereby beginning a new journey away from a past defined by an unequal relationship between the West and Africa.

However, as President Obama made it clear to the African people in his address to Ghanaians in the nation’s capital of Accra, that while “the West has often approached Africa as a patron or a source of resources rather than a partner,” it cannot, however, be held “responsible” for the lack of human and capital development on the continent. Africa’s future, he said, “would be shaped by the Africans.” But he also added that while Africa’s destiny would be defined by the African people, the US would  be with them “every step of the way.”

This message captures the overall US foreign policy towards Africa. It was not a political rhetoric, but a sincere message to the people of Africa on what the US, led by Obama, will and will not do.

High expectations, however, have largely been replaced with disenchantment. The war in Afghanistan is ongoing, Guantanamo is still open and the gap between the global north and south remains unabridged, if not worse. These and many other problems facing the African region and the world at large have been traced, whether rightfully so or not, to the president’s actions or lack thereof. And although to those who listened carefully to his message in Accra, it should not have come as a surprise that Obama’s first term made no radical difference to US-Africa relations; his seemingly lack of attention to Africa also disappointed many on the continent.

It therefore comes as no surprise that President Obama’s visit in his second term aroused mixed reactions among the African people. In 2009, the reception was largely of honor and joy as many Ghanaians stormed the streets along the path of his travels in their Obama cloths and T-shirts, celebrating the president’s visit. But on his second trip to the continent, not only was his visit overshadowed by the illness of the continent’s most renowned civil rights champion, Nelson Mandela, but also due to demonstrations by ordinary citizens and labor unions against Obama and US foreign policy. In South Africa, for example, the Congress of South African Trade Unions and its members saw the president’s visit as an opportunity to critique the US on issues ranging from labor discontent, the war in Afghanistan, and freedom of the press. The “No-Bama” coalition might represent a fraction of the larger population in South Africa, but they nonetheless speak for many well informed individuals concerned about such issues.

Africa must take its own agency

It appears that the African people, particularly the youth, are finally heeding his advice of four years ago: that Africa’s future is in the hands of the African people and the West cannot be totally held responsible for its lack of development.

US involvement in any part of the world is solely based on its own interests. Even in those instances when US interests coincide with the interest of the African people, one cannot be lured into thinking that the US is some charitable organization which is there to save the “free world.” The African people and their leaders must come to the realization that the grounds are shifting as they must, and that it is time to get out of the second class mindset into which they have been put for hundreds of years. While President Obama is an honest person with lots of compassion for humanity, and certainly for the people of Africa, he still remains, at least for the next three and half years, the president of a nation whose interests must come before his. Therefore, even though his recent visit to Tanzania, South Africa, and Senegal has the effect of deepening his personal relationship to the region through first-hand experience, Obama’s estimated $100 million visit still remains a business trip.

Africa, today, is home to six of the world’s ten fastest growing economies. South Africa has arguably one of the most diverse economies on the African continent, and its membership to BRICS serve to make it an even stronger player on the global stage. Tanzania and Senegal are both of strategic importance to US economic and security interests, and with countries like Russia, Turkey, Brazil, and especially China making economic inroads into Africa, the need to seriously engage the continent has never been greater.

The former Chinese leader made multiple trips to the continent. Chinese investment in Africa is estimated to be three times that of Washington's. China, as reported by the International Business Times,” became Africa’s largest bilateral trade partner in 2009; the total volume was valued at $198.5 billion in 2012 and is expected to surpass $380 billion by 2015.” Through the China-Africa Development Fund, China is not only solidifying its ties with Africa, but Beijing is also making it clear to the rest of the world that it is there to stay. President Obama’s visit was, therefore, a door opening trip, highlighting the continent’s economic usefulness to US investors, but also making the case to the African people that working with the US would have the potential for a greater impact both economically and politically to the region.

This is a very important moment for Africa and it appears that some, especially the youth, are rising to the occasion by holding not only their own leaders accountable for their actions, but also foreign ones. African leaders must recognize their continent’s importance as a strong contributor to global economic and political development, for Africa can no longer be seen as a taker, but as a giver. The “rush” for Africa should be seen as a very important opportunity to re-negotiate the relationship between Africa and the rest of the world from that of a patron to an equal partner at the trading table. The bigger the competition over Africa, the better for its people.

But in order for the continent to benefit equally from what some commentators have described as the “scramble for Africa,”  its people and especially their leaders must decide on whether they want to be treated as mere spectators to the second coming, or as serious partners and abled negotiators in the global village of the 21st century.

*[Note: Fair Observer presents Conversations on Google+ Hangout, where we will discuss Obama's recent visit to Africa and what it portends. It will cast a bird's eye view over the legacy of the past, the developments over the last two decades, and the trends that we can extrapolate into the future. For further information, please click here.]