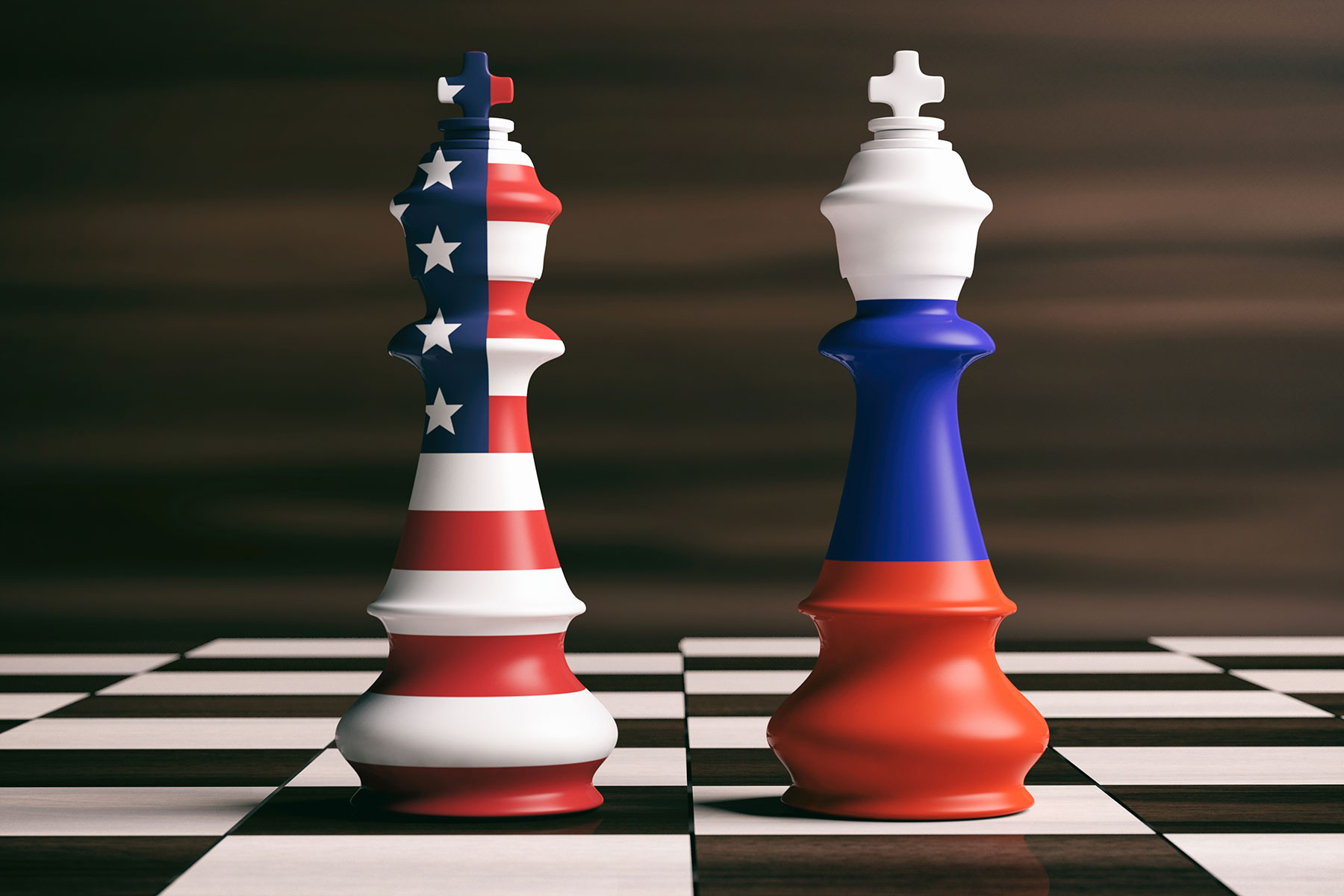 Most of the propaganda Western media is now mass-producing focuses on the very real belligerence and lies of Russian President Vladimir Putin. Print and broadcast media have thrown themselves into a propaganda game serving to cast them in the noble role of prosecutors of an evildoer and defenders of victimized Ukrainians. Some academic-style publications have begun to join the fray, in an attempt to refine the propagandizing strategies.

One good example is an article in The American Purpose by the National Endowment for Democracy’s vice-president for studies and analysis, Christopher Walker. In the piece titled, “The Kleptocratic Sources of Russia’s Conduct,” Walker builds his case around the idea that “Vladimir Putin and his gang are fixated on wealth and power.” The author admits being inspired by political analyst Daniel Kimmage, who in 2009 produced what Walker terms a “clear-eyed assessment of Putin’s Russia.” He cites this wisdom he gleaned from Kimmage: “The primary goal of the Russian elite is not to advance an abstract ideal of the national interest or restore some imagined Soviet idyll,” but “to retain its hold on money and power.”

Kimmage sums up one difficulty Americans have felt when dealing with Putin as an ideological adversary. Whereas the Soviet Union’s embrace of communism made the ideological gap visible even to moronic voters, Putin reigns over a nation that American consultants transformed in the 1990s into a capitalist paradise (i.e., a paradise for owners of capital). To distinguish Putin’s evil capitalism from America’s benevolent capitalism, Kimmage called the Russian version a “selectively capitalist kleptocracy.”

Walker notes that “the system of ‘selectively capitalist kleptocracy’ in Russia that Daniel Kimmage described” 13 years ago has now “evolved in ways that are even more threatening to democracy and its institutions.”

The form of government universally adopted by all powerful nations at the end of the 20th century.

An acerbic critic might be excused for not feeling particularly illuminated to learn that Putin and his cronies “are fixated on wealth and power.” Who would expect them to have a different philosophy and mindset than the leaders of every other powerful country in the world? The list includes those that claim to be faultless democracies, committed to implementing the will of the people. The first among them is, of course, the United States, but France, the United Kingdom and others adhere to the same sets of values, even if each of them has worked out more subtle ways of applying them. And, of course, Saudi Arabia stands at the head of everyone’s class as the exemplar of leaderships fixated on wealth and power.

The gap is destined to keep widening. Unlike Putin’s oligarchy, composed of his “selected” friends and other winners of Russia’s industrial casino, the 1% in the US have non-selectively emerged to constitute a kleptocratic class that, thanks to a sophisticated system of governance, writes the laws, applies the rules and captures the new wealth that is programmed to gravitate towards them.

Kimmage’s idea of a fixation “with wealth and power” correctly describes the mindset of the members of the American kleptocratic class, whether they are entrepreneurs with names like Jeff Bezos, Elon Musk, Mark Zuckerberg or Bill Gates, or politicians like Bill Clinton and Barack Obama who rose from poverty to convert power into riches and earn their place as servants of the kleptocratic class.

Unlike Putin’s mafia-like political culture, the system in the US is subtle and sophisticated. It contains convenient paths to join the kleptocratic class, such as a Harvard or Stanford degree. But mostly it relies on fixation. Within the US kleptocratic class diversity exists. Some may be more focused on power (including cultural power) than wealth. But the fascination with both wealth and power is common to all. The system is built on the symmetrical principle that wealth feeds power and power feeds wealth.

Walker accuses Putin of another grave sin, beyond kleptomania but including it: expansionism. He denounces the “spread of the roots and branches of a transnational kleptocratic system that stretches well beyond the Russian Federation to pose a multidimensional threat to free societies.”

How could a discerning reader not notice the dramatic irony here? Has Walker forgotten that Putin’s complaint about NATO is that, despite promises made to the contrary, it has spent 30 years aggressively expanding toward Russia’s most sensitive borders? Putin may be interested in expansion, but Eastern Europe has become a slow tug-of-war in which NATO, under US impulsion, has been the most active and insistent aggressor.

In short, Walker has produced an essay that correctly identifies very real political evils within the Russian system. But they share the same basic traits as the politico-economic culture of the West under US leadership. In an absolute failure of self-recognition, Walker somehow manages to avoid acknowledging his own culture’s image reflected back to him into the mirror that has become the target of his complaints. That is because, in this article, he has focused on producing just one more example of what has now become the shameless, knee-jerk propaganda that pollutes Western media in this climate of an existential war from which the US has abstained, preferring to let the Ukrainians endure the sacrifice for the sake of American principles.

In the 17th century, European history began a radical transformation of its political institutions lasting roughly 300 years. After England’s Puritans beheaded their king and declared a short-lived Commonwealth, European intellectuals began toying with an idea that would eventually lead to the triumph of the idea, if not the reality of democracy, a system Winston Churchill generously called “the worst form of government except for all the others.”

For the best part of the 19th and 20th centuries, representative democracy became the standard reference for everyone’s idea of what an honest government should be like, while struggling to find its footing with the concurrent rise of industrial capitalism. Capitalism generated huge inequality that seemed at least theoretically anomalous with the idea of democracy.

During the late 20th century, industrial capitalism that had previously focused on production, productivity and mass distribution, gave way to financial capitalism. This new version of capitalism focused uniquely on wealth and power. In other words, democracies switched their orientation from a belief in their citizens’ anarchic quest for personal prosperity in the name of the “pursuit of happiness” to the elite’s concentrated focus on the acquisition and accumulation of money and clout.

This new social model merged the logic of democratically designed institutions with economic and legal mechanisms that created a sophisticated system at the service of a small number of individuals who understood and controlled the levers of wealth and political power. Their major cultural achievement consisted of giving a sufficiently wide base to this new form of plutocracy that disguised its kleptocratic reality.

For nearly half a century, the Cold War promoted the spectacle of a combat between democratic capitalism and autocratic communism. Both sides seized the opportunity to build military powerhouses that could provide an effective shelter for the kleptocratic class. Once the heresy of communism was banished from Russia, it could morph, under Boris Yeltsin and then Vladimir Putin, into a caricature of the much more subtle kleptocracy encapsulated in Reaganomics.

The Russian and American versions of economic power management shared the same orientations but deployed them in contrasting ways. Kleptocratic rule was at the core of both. Using a musical analogy, the American philharmonic version of kleptocracy was delivered in Carnegie Hall, with a fully orchestrated score. Russia offered an improvisational version delivered by local musicians in an animated tavern. In both cases, as the proverb says, “he who pays the piper calls the tune.”