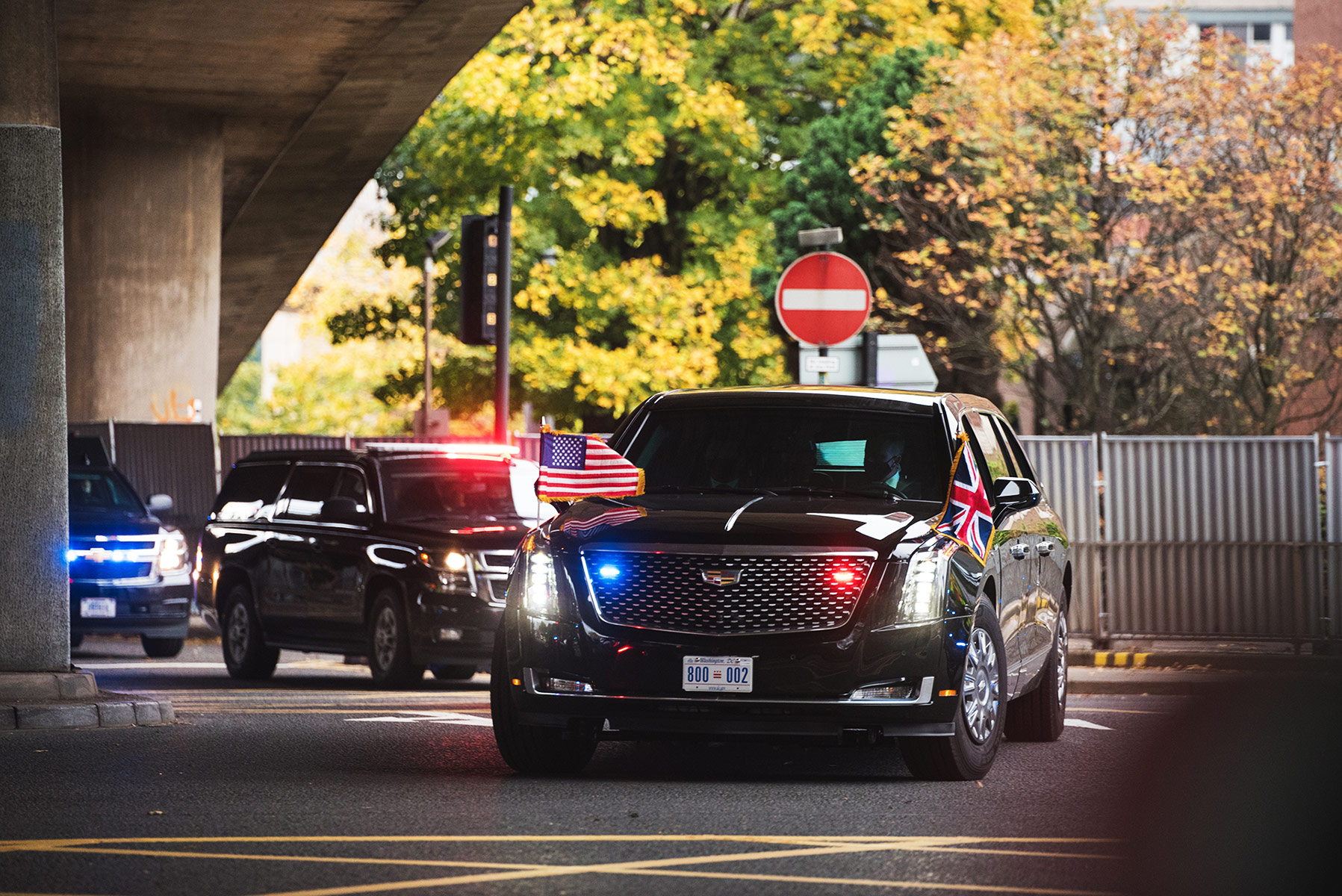 Senior editor David Knowles has been covering the COP26 climate conference in Glasgow, Scotland, for Yahoo News. He appears to be on a mission to celebrate the commitment of the US to lead the world in the noble goal of solving the climate crisis. His chief weapon is tossing softball questions to US political personalities who chose to be present at the event to comfort their public image.

On Sunday, he interviewed Congressman John Curtis, a Republican who uncharacteristically acknowledges the reality of climate change. If only other countries emulated the US, all would be well. Knowles politely challenges Curtis with this observation: “The Republican Party has been way behind when it comes to accepting the reality of climate change.”

Curtis jumps on the occasion to wax sentimental about a trip to the top of a mountain as a Boy Scout that left him with a “deep desire to leave this Earth better than we found it.” He concludes: “I actually think all conservatives, Republicans, have those same feelings — maybe some stronger than others.” In the US, feelings always trump action.

To close the interview, Knowles poses an even more obsequious rhetorical question to Curtis: “Should the U.S. be prepared to lead with new commitments in terms of reaching net-zero emissions?” This allows Curtis to have the last uncontested word as a cheerleader for the Republican Party, generously committed, as always, to responding to the world’s needs: “Republicans want all options and hands on deck to solve this problem.”

Knowles’ Tuesday article focused on the comments made by Alexandria Ocasio-Cortez. He misleadingly quotes the New York representative as asserting that “America is back.” Knowles failed to mention what The New York Times’ Lisa Friedman highlighted, namely that the celebrated member of “The Squad” traveled to Glasgow as part of Speaker Nancy Pelosi’s congressional delegation. It consisted of 20 Democrats making the trip under the banner of “America is back” slogan as a PR operation for the Biden administration and the still imperiled and largely insufficient Build Back Better bill.

Knowles’ article devoted to Ocasio-Cortez maintains to the very end that the US commitment to solving the climate crisis is already underway and is destined to succeed. In contrast, Friedman details the reasons why none of the legislation Ocasio-Cortez and Pelosi are championing in Glasgow has been passed. She explains why it may not be passed, largely due to opposition by Democrats such as Joe Manchin to its cost. It goes without saying that Curtis’ Republicans will unanimously oppose the bill.

On Monday, Knowles produced an article based on an interview with Samantha Power, administrator of the United States Agency for International Development. Among the various quotes, Power praised her boss in these terms: “President Biden is the first president to declare fighting corruption a national security imperative, and of course he considers the climate crisis a national security threat.”

In a 2006 article in “Third World Quarterly,” Alice Hills noted that the George W. Bush administration “broadened the remit of the United States Agency for International Development (USAID) in such a way as to make it a quasi-security agency.” In other words, an agency presumably dedicated to helping the developing world become fully integrated into the security state and the military-industrial complex.

This was already the trend well before the Bush administration. As documented by France’s School of Economic Warfare, “the CIA nevertheless uses USAID to infiltrate certain political milieux, for example in Latin America, to destabilize socialist regimes in the 1970s and 1980s.”

That is why Knowles can be accused of a certain lack of curiosity when he uncritically reports Power’s formulation of USAID’s mission with regard to the climate crisis: “We want to do more to help countries around the world, especially developing countries, accelerate their clean-energy transition, address pollution, and ensure the world we all must share a cleaner, safer, healthiest planet. And we have an obligation to help.”

Instead of challenging her on the operations USAID engages in and on its ambiguous role in geopolitics, he takes this statement as proof that “Power firmly believes that creating climate equity is a moral imperative.”

Power applauds President Joe Biden’s “pledge to donate $3 billion annually to help developing nations adapt to climate change.” But she “acknowledged that addressing rampant corruption in countries that will need those funds could prove challenging.” Having made such a complaint, one can only presume that Power is aware of how corruption works. But there may be good reasons to suspect some hypocrisy.

The idea she puts forward is that of a generous rich nation, the US, giving away money to small, struggling nations that are somehow afflicted with a cultural disease known as systemic corruption. This means that money made available by magnanimous benefactors is routinely stuffed into the pockets of self-interested local politicians. How regrettable that these backward people have retained such uncivilized and unproductive behavior.

Presumably, Power has, at some point, found the time to consult John Perkins’ book, “Confessions of an Economic Hit Man,” who defined in his preface what the job he exercised when he worked for Chas T Main consultants consists of: “They funnel money from the World Bank, the U.S. Agency for International Development (USAID), and other foreign ‘aid’ organizations into the coffers of huge corporations and the pockets of a few wealthy families who control the planet’s natural resources.” They “cheat countries around the globe out of trillions of dollars.”

Power presents things a little differently. The problem isn’t the operations conducted by global businesses working hand in hand with the CIA. Instead, it’s the fact that the poor countries of the world haven’t solved a problem that no longer exists in the US — corruption: “I think it’s really important for donor countries to do what the United States has done, which is to elevate the anti-corruption agenda and mainstream it across development financing.”

Although both Perkins and Power have conducted their professional lives in the same context, their views could not be more divergent. Is it possible that Power hasn’t had time to read Perkins’ book? Or does she believe that what he describes doesn’t exist? The real problem is that they have two different views not just of the political organization but of history and the notion of corruption.

Corruption has existed throughout history. It is a standard feature of human relations. At its simplest level, it is an exchange of favors between two people. It becomes more complex when those favors create a conflict with other interests, responsibilities and stated moral commitments.

The truly complicating factor is money, precisely because, unlike a lot of personal favors, it has no smell. The greatest contribution to the history of the shared Anglo-Saxon civilization initiated by England and perfected by the US was to put money at the core not only of all human activity but of morality itself. When financial success becomes the unique measure of social respectability and when personal interest is elevated above social responsibility, corruption becomes a way of life.

The greatest innovation came with globalization, an inevitable consequence of 500 years dedicated to colonial conquest. It enabled wealthy countries to create a sophisticated, indirect system of corruption that they could even call democracy while condemning the more primitive type of corruption that consists of granting direct favors. Democracy that depends on corporate financing of politicians’ electoral campaigns is an example of systematic, institutionalized corruption.

This is now considered moral. Political leaders of formerly colonized countries who skim money off from aid or loans offered by wealthy nations and corporations provide the example of traditional, “immoral” corruption.

In a series of decisions, the US Supreme Court formalized the distinction between the absolute domination of money over politics — now considered normal and moral — and immoral corruption. Conveniently, people like Joe Manchin are normal (i.e., not corrupt), but leaders of African countries who are manipulated by corporations and supported by the US security state can be critiqued as not living up to the high standards of American democracy.