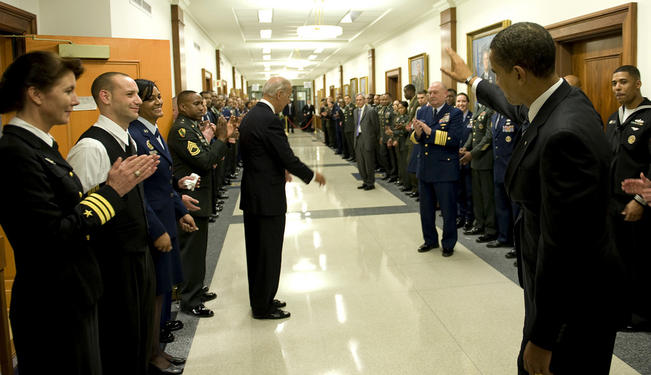 Many approach the US presidential elections seeking to choose between the "lesser of two evils". But does voting the passive voice have serious implications for American foreign policy in the Arab and Muslim world?

For liberal America, it is becoming harder and harder to sell the almost painfully trite and stale cliché that one must pick “the lesser of two evils.” The simple fact is that, for advocates of human rights and equality, a vote for Barack Obama requires a number of back-peddling explanations and heartfelt apologies, not least of which regarding the broader Arab and Muslim world.

In a widely-praised address from Cairo in 2009, Obama stated that the “cycle of suspicion and discord” which defines American-Muslim relations “must end.” Seeking a fresh start, Obama boldly claimed his desire to build a new relationship: “one based on mutual interest and respect; one based on the truth that America and Islam are not exclusive, and need not be in competition.”

But from the onset of Obama’s presidency, the broader Arab and Muslim world has been exposed to a violent uptick in American imperialism. From North Africa to Afghanistan, Obama has not merely continued the belligerent policies of the Bush Administration; he has greatly expanded violent measures and seized all opportunities to entrench American dominance.

Though initially started by the Bush Administration, the use of US drones has skyrocketed under Obama’s command, namely in Yemen, Somalia, and Pakistan. Though this is one point on which Republican candidate Mitt Romney and President Obama agree, a recent poll published by the Pew Foundation found majorities in 17 of 20 countries across the world disapprove of drone strikes.

The Bureau of Investigative Journalism found that 884 out of at least 2,572 people killed by drones on the Afghanistan-Pakistan border since 2004, were civilians. In other words, drone use in Pakistan has a roughly 34% failure rate. From 347 drone strikes as of October 10, 2012, the Bush Administration was responsible for a mere 52, with the Obama Administration for the remaining 295.

According to Peter Bergen, the targets of drone attacks are chosen based on “patterns of merely suspicious activity by a group of men.”

The drone program has also resulted in the extra-judicial killing of at least three American citizens. In September 2011, claiming that they were both Al-Qaeda commanders, the United States killed Samir Khan and Anwar al-Awlaki in a drone strike in Yemen. They were both American citizens who had never been legally charged with terrorism. Two weeks later, Abdulrahman al-Awlaki, the 16-year-old son of al-Awlaki, was killed in a similar drone strike.

United Nations Special Rapporteur Ben Emmerson, recently announced that he will head an investigation into the legality of the US drone program, the existence of which “the Obama Administration… will neither confirm nor deny.”

In February 2011, Obama praised the Egyptian Revolution, commending Hosni Mubarak’s decision to step down from the presidency. Just a few months after hundreds of thousands of brave Egyptians peacefully toppled the three decade long dictator, the Supreme Council of the Armed Forces (SCAF) was punishing pro-democracy demonstrators with American-made tear gas in Tahrir Square, the very same square that had been branded the throbbing heart of the revolution.

Notably absent from Obama’s speeches of praise and encouragement was an official apology for propping up Mubarak for the prior three decades. Much the same ingenuity marked American support for the Tunisian revolution.

Tunisia and Egypt, however, were at least lucky enough to garner the nominal support of the United States, while uprisings in Jordan, Bahrain, Morocco and elsewhere were quickly crushed or quelled by American-backed autocracies.

In the case of Bahrain, the parking lot of the US Navy’s 5th Fleet, a Saudi and American-backed Sunni monarchy freely imposes its suffocating will on a restive Shiite majority that accounts for at least 70% of the total population. Although the ongoing unarmed rebellion began at almost the same time as the Egyptian Revolution, with calls for almost identical demands, the official American response has been vastly different.

A small island situated snugly between Iran and the plentiful oil fields of Saudi Arabia, the Obama Administration wasted little time in deciding that Bahraini self-determination did not mesh well with American imperial designs in the region.

The month after demonstrations swallowed the small island, in a visit intended “as a show of support for the ruling family,” the now former US Secretary of Defense Robert Gates landed in Bahrain to peaceful anti-government demonstrations that numbered in the thousands. Three days later, joint Gulf Cooperation Council (GCC) military forces entered Bahrain to assist the regime in suppressing the unrest, an operation which entailed around 5,000 security forces with tanks and helicopters stormed Pearl Roundabout killing several and injuring hundreds.

In Libya, an oil rich country having long toiled under the despotic auspices of Muammar Qaddafi, the United States swiftly participated in a NATO campaign to arm and support rebels in their quest to violently overthrow the dictatorship.

The most horrifying display of bloodshed in the region is presently taking place in Syria, where the United States, though making several passing remarks in condemnation of President Bashar al-Assad’s violent crackdown, ostensibly has yet to adopt an official position.

Through a careful process of selective endorsement, American hegemony is preserved — Obama’s approach, in that sense, functions as a present day Sykes-Picot accord, a project to redraw the borders of dominance and influence in the Middle East. Despite all the praises of democracy and freedom, the United States continues to foster despotic police states in the various Gulf kingdoms, and shields many Middle Eastern regimes with horrible human rights records, not least of which Israel’s ostensibly endless colonization of the embattled remains of historic Palestine.

The Israeli-Palestinian conflict has always, and will continue, to serve as an insurmountable barrier to reconciliation between the US and the Arab and Muslim world.

In the same 2009 Cairo address mentioned above, Obama set to rectify this source of contention. He stated that Palestinians “endure the daily humiliations — large and small — that come with occupation.” The United States, he proclaimed, would no longer ignore “the legitimate Palestinian aspiration for dignity, opportunity, and a state of their own.”

Despite several highly publicized spats between Obama and Israeli PM Binyamin Netanyahu, in September 2012 the US Ambassador to Israel reaffirmed the close cooperation between the two countries to sustain Israel’s security, including the prevention of a nuclear-armed Iran. Former Defense Department official Dennis Ross later told Haaretz that “what [President Obama] has done for Israel in the area of security is without precedent.”

Unchecked support for Israel has meant the hastened colonization of the West Bank and an airtight siege on the Gaza Strip.

Israeli settlement is so deeply entrenched in the West Bank that carving out a sovereign Palestinian state has become an impossible task. Almost half a million Israeli settlers live in well-guarded settlements in East Jerusalem and the West Bank. Small pockets of “sovereign” Palestinian Authority control in cities such as Ramallah, Jericho, and Bethlehem have dissected the West Bank into what are effectively Bantustans.

Few Palestinians still have faith in President Mahmoud Abbas and Prime Minister Salam Fayyad’s ability to reach a final peace agreement with Israel, as was demonstrated by the massive anti-government demonstrations that engulfed the West Bank recently in September.

The post-Oslo embers of hope have burnt out, and many Palestinians now see ahead of them a long nonviolent struggle for a single democratic state that respects equality among all its citizens regardless of their ethnic or religious affiliations. In 2011, Rashid Khalidi argued that the Obama Administration had situated itself “to the right of the most right-wing, pro-settler government in Israeli history,” and that the two-state solution had been “buried by forty four years of unceasing Israeli colonization of the West Bank and East Jerusalem under the benevolent gaze of nine successive US administrations.”

Furthermore, many Palestinian activists are beginning to see the two-state solution as Israeli-imposed apartheid. Though President Obama encouraged Palestinians to abandon violence and model their struggle on the American civil rights movements, one doubts that he will put any pressure on Israel or pledge any meaningful solidarity for a new generation of Palestinians who have switched their sights from territorial liberation to civil rights and freedom in a single democratic entity.

The exercise of sacrificing swaths of liberal demands by voting for “the lesser of two evils” sustains international inequality and American hegemony at the expense of democracy.

As new information emerges each day that renders American liberal support of Obama and the Democratic Party more and more difficult, the need to imagine a new American political culture becomes more pressing. One that transcends the boundaries of a two-party system which, as Professor Noam Chomsky said, “encourages the American public to vote, but not to participate more meaningfully in the political arena.”

The American public discourse ought to be scrapped and rebuilt from the ground up. The United States desperately needs a third party not compromised by corporate meddling or tired positions on age-old debates. A vote for Obama, while marginally better than one for Romney, is a vote for American empire and of all the injustices that comes along with it: from the extra-judicial killing of American citizens to the co-opting of Arab revolutions; from indifference to its allies’ human rights violations to the ongoing injustice against Palestinians.