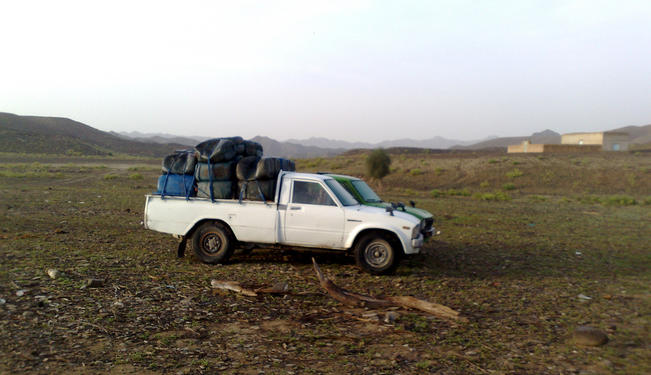 Quetta, Balochistan, was the site of a fatal suicide bombing on December 2011, when 16 people were killed and another 35 injured near the residence of tribal elder Shafiq Mengal. The Baloch Liberation Army (BLA) claimed responsibility for the attack, which came at the end of an extremely turbulent year in the troubled province of Balochistan. Although civilian death tolls dropped from the 2006 to 2008, they began rising once again in 2009. Recent 2011 figures show 542 civilian fatalities in the province, more than doubling the previous year's statistic of 274 deaths. Although civilian deaths are most commonly reported when they are linked to the NATO occupation of Afghanistan, the factor of resurgent Balochi nationalism commonly remains unstated. This is to the detriment of the province's wider observers, who are overlooking the Balochi insurgency's tremendous growth in recent years.

The Balochi people are now settled in the areas of south-eastern Iran, southern Afghanistan, and western Pakistan.

The British Raj signed a security agreement with the Khan of Kalat in 1887. The Raj respected the Khan's sovereignty and gave him considerable autonomy. It also did not subdue Balochi tribes under its central authority, instead giving them independence under the condition that they allowed the British military to cross their territory. The British understood a reality that is still commonly overlooked; Balochi tribes themselves do not function under the authority of whatever governing body dominates wider Balochistan.

The Khan of Kalat, facing significant political pressure within the state, declared Balochistan to be independent less than a day after Pakistan's official creation in 1947. The Pakistani army invaded on April 1, 1948, leading to the Khan's surrender and crushing his brother's resistance in about a year.

Islamabad then merged the four provinces of West Pakistan (Punjab, Sindh, Balochistan, and North-West Frontier Province) into a homogenous "One Unit" in 1954. The policy was aimed at countering the strength of Bengali-dominated East Pakistan, and sought to prevent the three minority-dominated provinces from mobilizing against the Punjab. The policy quickly caused tension with Balochis, who formed an anti-One Unit movement. The Pakistani military once again crushed this mobilization with the death of Balochi national hero "Babu Khan" by 1964, ending both the 1958 revolt and a smaller 1962 uprising.

Insurrection
These instances of Balochi upheaval were minor in comparison to the bloody 1973-1977 conflict in Balochistan. General Yahya Khan came to power in 1969 and reversed the One Unit policy, leading to Balochis finally being recognized in Zulfiqar Ali Bhutto's 1973 Constitution. This was after the state excluded Balochis in two previous constitutions. General Khan's move also led to a democratically-elected coalition government in Balochistan. Naseer Mengal was Chief Minister of this government, and also the father of the now-deceased Shafiq.

Simultaneous to these efforts were Balochi militant organizations. Twenty-two rebel camps were created in July 1963 as Balochis attempted to reorganize after the 1962 defeat. This structure would later unify into the Baloch People's Liberation Front (BPLF), which instigated the 1973 insurgency. The fallout of this conflict directly affects current violence in the province.

There has always been a separation between the state and those it represents in Balochistan. This distance means that administrative bodies in Balochistan have never totally controlled, represented, or even interacted with tribal groups in the area. This split dates back to 1947, when the Khan of Kalat's decision to accede did not necessarily transfer to tribes themselves. As a result, the democratic government of Balochistan faced the considerable challenge of building a relationship with its constituents to make them recognize its central authority, something that many Balochis have never done. The experiment was already difficult, and the Pakistani military intervention against the BPLF made it impossible.

Following a diplomatic visit by Bhutto to Iran, during which the Shah warned him against nationalist movements on the Iranian-Pakistani border, the elected government was dismissed. Mengal sought greater control over industrialization and development. Balochistan has also been consistently important for its geostrategic significance as well as its vast underground reserves of copper, gold, oil, natural gas, and other vital resources. These are essential for Pakistan's internal growth as well as trade with the neighboring People's Republic of China.

The Pakistani military entered Balochistan with 78,000 soldiers and support from the Shah's fleet of Cobra helicopters, and were resisted by about 50,000 Balochi tribes people. This conflict took the lives of 3,300 Pakistani troops, 5,300 tribes people, and thousands of civilians. After the 1977 coup d’état, which resulted in General Zia ul-Haq coming to power, the Pakistani military declared victory in Balochistan and withdrew its forces.

The New Insurgency
After the 1973 Baloch insurgency, current national movements and terrorist groups gradually began to form and reorganize. The Baloch National Party (BNP) was an alliance of moderate political forces aimed at winning support for nationalism in the province. The BNP aimed to establish political autonomy with limited control from Islamabad. The Balochistan Students Organization (BSO) aims to establish a multinational Pakistan and a recognized Balochi nationalism within it, such as through using the Baloch language as a medium of instruction.

Most terrorist attacks against the Pakistani military and targets within Balochistan are attributed to the Balochistan Liberation Army (BLA), which was formed in the early 1980s and aims for a Greater Balochistan that includes territories in south-eastern Iran and southern Afghanistan. Operations have also been seen in the Bugti tribe, which controls a force of about 10,000 fighters that takes a similarly hardline approach to nationalism in the province. Even throughout the 1990s, Balochis were more or less divided between the two movements, until the 2000s when groups such as BLA and Bugti began to gain more strength.

Musharraf and the United States
Following the ascension of General Pervez Musharraf to power in 2001, the Pakistani military began taking a much more stern policy towards Balochistan. Musharraf expanded upon a two-step approach to the province, which was still in place:

The first was to divide and rule. Islamabad created rifts and division among non-dominant groups by actively promoting distrust among opposition factions. This strategy only happens to work if local Balochi leaders are opportunistic and vengeful against one another, explaining why the BLA killed Shafiq Mengal even though the Mengal tribe was also at war with the Pakistani government. Islamabad also empowers allied elite in Balochistan such as tribal chiefs, lords, intellectuals, and politicians through benefits and political favors.

The second is economic dependency. Islamabad, through the previously stated policy of divide-and-rule, empowers dominant groups to act as liaisons for the Pakistani central government. This leaves many Balochi citizens unable to function independently, a situation that is worsened by 98% of revenue from natural resources leaving the province. Additionally, many industries functioning in Balochistan, which includes the Frontier Corps and other military establishments, employ non-locals rather than unemployed Balochis.

Musharraf also began a ruthless military campaign against the Baloch nationalists, following a rise in attacks from the BLA and other tribes, known as kill-and-drops. Justifying the policy on spreading stability in the province, Musharraf began assassinating non-violent organizers in the BSO and BNP as well. The Pakistani military launched an assault on Balochistan in December 2005, attacking groups such as Bugti, but also expanded the kill-and-drop policy. The BNP itself remains damaged by the kidnap and murder of three major leaders by Pakistani intelligence agencies. The event, which occurred on April 8, 2009, has come to be known as the Turbat killings and caused protests, riots, and strikes in Balochi communities all over Pakistan.

Turbat especially has catalyzed the strength of violent separatist groups that call for complete secession from Pakistan. Due to kill-and-drop policies and the marginalization of Balochi nationalists who advocate for greater liberty within Pakistan, Islamabad has strengthened the fringe terrorist movement considerably. The opinion among many fighters is that democratic Islamabad, as has theoretically been the case since Musharraf stepped down in 2008, is indistinguishable from dictatorial Islamabad. Certainly, cases such as the Turbat killings add strength to this logic.

The war in Afghanistan and tensions between the United States and Pakistan have placed focus on a peaceful solution to the Balochi question. The US Congress recently held a session on the future of an independent Balochistan, clearly meant to send an antagonistic message towards Islamabad. Some members of the Balochi middle-class seek to capitalize on this opportunity, pressuring Congress to recognize Balochi liberty as part of a larger strategy to attack Taliban groups operating in Pakistan.

However, much of the American cultural consciousness regarding Pakistan starts with the September 11, 2001, terrorist attacks, which is precisely why the nature of Balochi resistance must be properly understood. The current Taliban resistance, which bases its major leadership in Quetta, is able to operate in the province mainly because it lacks central authority and tribes function independently from the state. Pressure for the Pakistani military to attack the Taliban in Balochistan does not bear in mind the military's memory of such events as the 1973 insurgency. Baloch nationalism is therefore tied into American aspirations in Central and South Asia, and will continue to be important as Islamabad attempts to navigate its growing problem of violent instability.