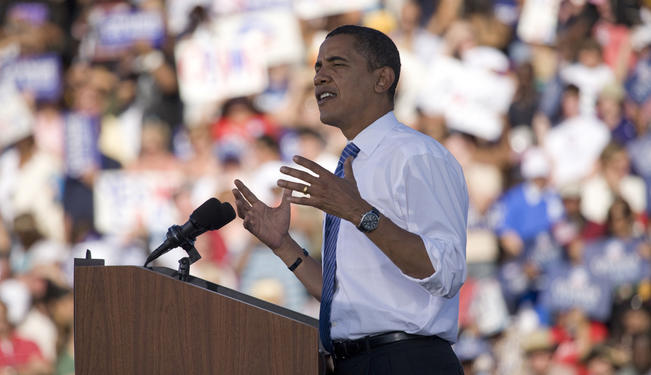 With a heightened sense of urgency to act on Syria, Washington is resorting to moral arguments.

What appears to have been a chemical weapons attack in the Damascus suburb of Ghouta, has made a potential US-led military strike against the Syrian government a very real possibility. Shocking videos of dozens of dead bodies in makeshift hospitals have widely circulated around the Internet. US Secretary of State John Kerry, when addressing the press on August 26, spoke of a “moral obscenity” and, in a more personal tone, of how as a father himself he couldn't “get the image out of [his] head of a man who held up his dead child, wailing while chaos swirled around him.” Kerry clearly conveyed President Barack Obama’s belief that “there must be accountability for those who would use the world's most heinous weapons against the world's most vulnerable people.”

On August 31, Obama stated: “After careful deliberation, I have decided that the United States should take military action against Syrian regime targets.” In the same speech, he also announced that he would seek congressional authorization for such action.

At the time of writing, the US Senate’s Foreign Relations Committee reached a bipartisan agreement allowing the US president “to deploy force in response to the Assad regime’s  criminal use of chemical weapons.” While voting on the resolution will not occur before the end of the summer recess next week and since the House Foreign Affairs Committee is yet to meet, on September 3, Obama gained crucial support from top House leaders.

Before the president’s official statement, there was a clear build-up to his decision in favor of deploying military force, as the rhetoric on the need to ensure accountability, coordination meetings with the exiled Syrian opposition in Istanbul, and the publicly stated readiness of the US and allied militariessuggested.

The Last of the Red Lines?

In the aftermath of the Iraq War and with the Afghanistan conflict still raging on, President Obama has always made it very clear that he does not intend to involve the US in another conflict. However, he already mentioned a red line regarding the movement and use of chemical weapons one year ago, on August 20, 2012: “We have been very clear to the Assad regime, but also to other players on the ground, that a red line for us is [if] we start seeing a whole bunch of chemical weapons moving around or being utilized. That would change my calculus.”

Images of the aftermath, combined with statements by Obama that “the Syrian government carried these [chemical weapons attacks] out,” give the impression that the often cited “red line” has been breached. It has to be noted that previous allegations of the use of chemical weapons have not triggered a similar reaction.

The very real possibility of “tailored, limited” military strikes against the Syrian Army has caused many analysts to speculate over why the US government, after more than two years of bloodshed and over 100,000 deaths, wants to engage in military action.

In an interview with PBS, Obama stated that if there was to be a military strike, “the Assad regime, which is involved in a civil war, trying to protect itself, will have received a pretty strong signal, that in fact, it better not do it again.” The US president also clarified that a military strike would not end “the death of innocent civilians inside Syria.”

The main point here is that any attack would serve as a punitive act against Bashar al-Assad, which is not intended to end the regime's rule. With regard to this last point, it is important to recall that there still remains a high degree of uncertainty and apprehension regarding power configurations in a potential post-Assad Syria, with Islamist groups such as the al-Qaeda affiliated Jabhat Al-Nusra being among the strongest fighting forces.

Unsurprisingly, President Assad has demonstrated defiance in the face of a possible attack: “The threats of direct aggression against Syria will only increase our commitment to our deep-rooted principles and the independent will of our people. Syria will defend itself in the face of any aggression.” Although military strikes might cause further defections, such an attack, orchestrated by foreign powers, would buy into the regime’s narrative of a foreign conspiracy, and thus potentially strengthen overall cohesion among its supporters.

Moreover, Obama cited that the situation “has to do with not only international norms but also America’s self-interest.” He also hinted at potential dangers to allies such as Israel, Turkey, and Jordan, as well as US bases in the Middle East in case of a proliferation of chemical weapons. Turkey’s prime minister, Recep Tayyip Erdogan, for example, stated in May 2013 that Syria had used chemical weapons and urged the US to “take stronger action.” Erdogan is also at this point one of the main supporters of an intervention.

Another reason, as Rachel Shabi argues, is that an attack would be to “save face.” This idea is directly related to Obama’s frequent reference to the red line and many actors urging him to take action due to continuous bloodshed. Notably, the US president said on August 31: “We cannot raise our children in a world where we will not follow through on the things we say.”

An important point in this regard, which is also mentioned by Shabi, is morality. As mentioned above, this theme featured prominently in Secretary Kerry's remarks on August 26 when he spoke of a “moral compass” and that the events defied “any code of morality.” Obama, in a similar tone, spoke about international norms. Without a UN Security Council resolution at the time of writing, the question is, will this be the main argument surrounding an intervention?

In this context, it is crucial to remember the humanitarian dimension that the “red line” statements and the rhetoric surrounding the attack in Damascus have. Then-Secretary of State Hillary Clinton clearly stressed humanitarian and medical emergency issues when the “red line” was mentioned. The language of morality is closely related to the humanitarian dimension of the debate. Obama’s reference to “young girls and boys gassed to death by their own government” and the subsequent characterization of the attack as an “assault on human dignity” tie these two issues together.

Regardless of whether one is convinced of the humanitarian reasoning or not, it has to be remembered that the failure of the Clinton administration to act during the Rwandan genocide in 1994 has had a profound impact on the concept of humanitarian intervention.

Shadows of the Past

Russia, a supporter of the Syrian government, strongly voiced its opposition to a potential military strike. Foreign Minister Sergey Lavrov described it as a “terrible mistake that will lead to more blood being spilt.” Referring to Washington's past military incursions into the Middle East, he warned of a repeat of the “Iraqi and Libyan scenario.” In the past, Russia, which had abstained from the UN Security Council Resolution authorizing action in Libya in 2011, has often voiced its opinion that this resolution was abused and turned into a campaign for regime change. Lavrov also called any military action “a very grave violation of international law” and lamented the fact that the US has not produced evidence for the Syrian government’s culpability.

Russia’s opposition is rooted in several factors. Due to a long-lasting strategic alliance, Moscow views the Syrian government as a key ally, in part due to the Russian Navy’s base in the port of Tartus. Furthermore, Russia is — as are, for example, the US — concerned about a post-Assad Syria, which, considering Russian support for the Assad regime, is unlikely to be friendly.

The Obama administration’s invocation of morality and norms has to be seen in this context in order to properly understand the build-up to a potential military strike. It would be not be the first time that moral justifications are a strong part of the reasoning before a military conflict. The rhetoric before the Afghanistan and Iraq wars brings up memories of such reasoning.