While Amazon scored an unexpected hit with its suite of Echo smart homes, the sector is still waiting for a system that will seamlessly integrate a growing cadre of “intelligent” products.

Amazon’s popular Echo device powered by an artificial intelligence personal assistant called Alexa has rekindled hopes that the smart home—where everything from entertainment and appliances to security, heating and lighting systems are all interconnected—is just around the corner.

Not so fast, warn experts at Wharton. “The popular press is enamored with the connected home, but we’re only seeing a glimmer of what’s ultimately possible,” says Wharton Management Professor David Hsu. “It’s very early, and we have to see tighter integration between all of the players.”

Since Amazon launched the Echo in 2014, the $180 device has garnered positive reviews from users and was listed as a best-seller on its site during the holidays. (The company has not released official sales figures.) Amazon recently added two new devices, the Dot and the Tap, to the Echo line of products. The $130 Tap is a portable version of the Echo, while the $90 Dot is a tiny version of the product designed to hook up to a speaker. These devices can be used to order a pizza, adjust the lights and temperature in your home (through partnerships with home automation companies including Samsung, Wemo, Hue, Wink, Nest and ecobee), read an audiobook and give a weather report, among other tasks.

But Amazon isn’t the only tech giant vying to become the glue that connects various devices in your home. Apple has a platform for software developers called HomeKit that can interoperate with security systems, appliances, locks, shades and lighting to control a home. Samsung has a product called SmartThings that controls home functions using an app that works on Apple’s iOS or Android devices. Samsung’s platform, which connects via multiple standards, works with everything from speakers to doors and locks, security systems and lighting.

Apple, Amazon and Samsung have the most traction among developers and an ecosystem of partners, but no clear winner has emerged, nor has any one company managed to solve all the challenges necessary to provide the foundation for a seamlessly connected home. “There are too many standards and no one platform to go across all of the devices,” notes Saikat Chaudhuri, executive director of Wharton’s Mack Institute for Innovation Management. “The concern I have is interoperability.”

Currently, the smart home landscape is a series of technology silos. Entertainment systems can be connected, even though many vendors may prefer to bind the consumer to a single platform, such as Apple’s iOS or Android. The ultimate vision for the smart home would connect all appliances, home entertainment equipment and control systems as well. 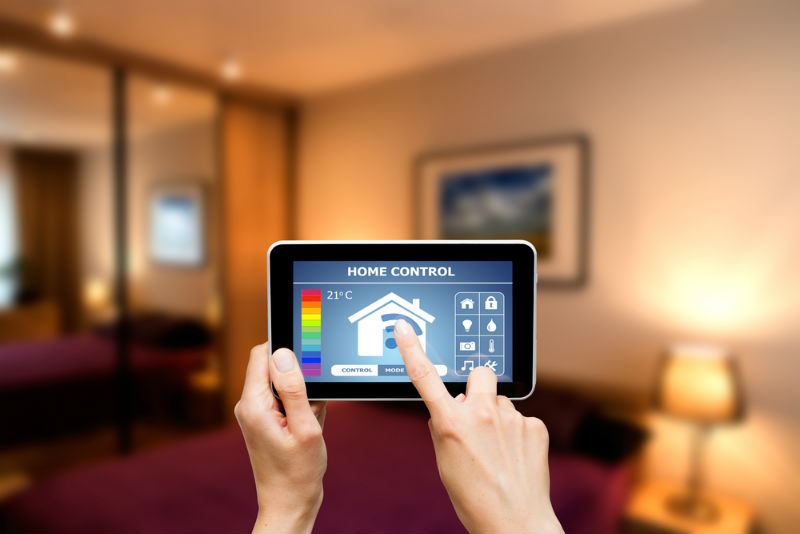 Forrester analyst Frank Gillett noted in a blog post that “consumers are implementing connected home activities one gadget at a time.” About 13% of US online adults use one or more smart home devices, according to Forrester. The research firm also said that emerging smart home devices will perform tasks in a variety of categories, including home access, automated background activities such as environment controls, and safety and engagement functions such as cooking, entertainment and health management.

How should a homeowner approach the smart home? Peter Fader, a marketing professor at Wharton, is figuring it out on the fly. Fader is wiring his new home to be connected. His biggest concern: How do you put home infrastructure in place today so it will be relevant in the future?

“We’re in spring training and hoping to build something that doesn’t have to be completely replaced by the third inning,” quipped Fader, who is also co-director of the Wharton Customer Analytics Initiative. “I have no confidence that the infrastructure today will get us far. That’s what makes it so exciting.”

Fader’s bet is that Wi-Fi will be an enduring standard. Today, home systems can be networked using Bluetooth, a popular wireless connectivity protocol; Zigbee, which is similar to Bluetooth; and Z-Wave, to name just a few.

“Right now it’s wishful thinking to pick a winner” in the smart home race, Fader notes. “No one thought Amazon would have an early leadership position.”

Tim Courtney, vice president of sales and strategy at Further Enterprise Solutions, is an informal advisor to Fader in his smart home effort. Courtney has consulted for Samsung’s SmartThings unit, which aims to connect appliances and smart home end points.

“The smart home is a mess, but I think the platform that is most open will ultimately win,” says Courtney. “There are a lot of smart things for the home, but they aren’t integrated.”

For instance, a consumer with Ring, which is a tool that can be used to see who is at the door remotely via an app, and Nest, the smart thermostat, would need two applications for home control. At present, the more smart home devices a person has, the more apps he or she needs, too.

Can You Hear Me Now?

There also has yet to be clear consumer consensus over whether the preferred method of controlling a connected home is a voice assistant, like Amazon’s Alexa or Apple’s Siri, or simply tapping instructions into a smartphone or tablet.

Since Amazon launched the Echo in 2014, the $180 device has garnered positive reviews from users and was listed as a best-seller on its site during the holidays.

While voice recognition programs are often the butt of jokes, artificial intelligence technology is only going to improve, Hsu says. “Voice is the natural way into the home and fits in with social norms,” he notes. “The digital assistant approach makes a lot of sense, and people will ultimately carry on a conversation to control things in the home that matter.”

Voice controls can be easily learned and consumers may prefer it over constantly having to reach for their phones to complete a task, he adds.

Chaudhuri disagrees, arguing that a smartphone is the obvious control point. “You’ll want multiple devices to connect to [a smart home system], and the phone is everywhere,” says Chaudhuri. “That reality means that Apple is well-placed with its concept of apps.”

Fader also expects that a smartphone or tablet will be the primary entry to smart home controls for the foreseeable future.

“I’m not going to be my own systems integrator,” says Chaudhuri. “Right now, we have all of these individual devices that may be useful. We have a bunch of digital devices in a home. We don’t have a digital home system.”

And Chaudhuri doubts that any of the current players can create that system. “We won’t get the full benefit of the smart home until there’s a platform that brings it all together,” he notes.

For instance, a company like Honeywell that already makes control systems could take on the integration role, says Chaudhuri. Indeed, Honeywell has a product line focused on the smart home and has grown the business organically and through acquisitions. Honeywell’s Lyric products integrate with Apple’s HomeKit, Samsung’s SmartThings as well as the company’s own smart home platform, dubbed IFTTT (If This Then That). Honeywell’s products include a smart thermostat, a water leak detector, a security system and fire prevention devices. Honeywell is also integrating its connected home products with its line of health care products and services.

At a March 2 investor meeting, Honeywell officials said the company is focusing on software for industrial customers as well as the smart home to grow revenue and profit margins. Honeywell’s software strategy in part revolves around connecting front-end devices in the home to applications and analytics for contractors and utilities. 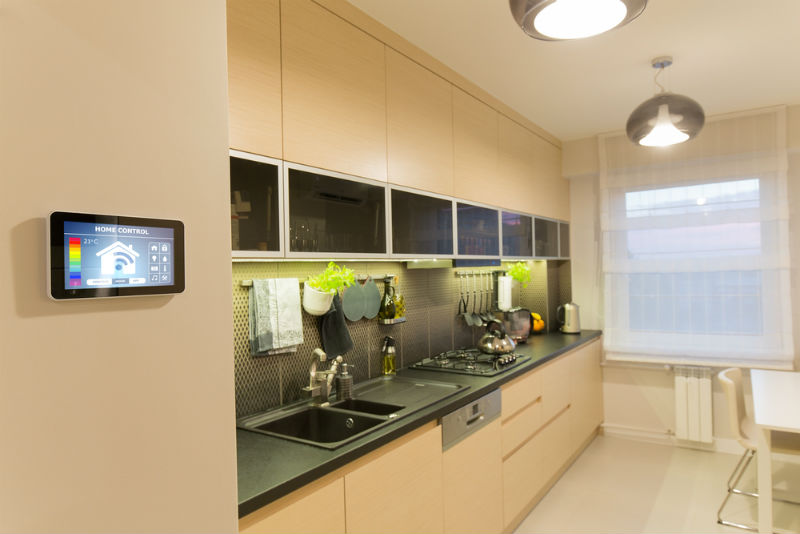 Honeywell’s home platform revenue has had a 25% compound annual growth rate over the last three years. The firm has three units—aerospace, automation and control solutions, and performance materials and technologies. Smart home products are lumped into the automation and control solutions unit and account for 19% of the division’s $14.1 billion in sales for 2015. Honeywell reported 2015 revenue of $38.6 billion.

Another approach would create a layer of software that rides on top of the various smart home systems. Chaudhuri says a company that is a successful smart home integrator is likely to be agnostic relative to devices and operating systems.

In addition, companies like Best Buy could begin offering smart home implementation services. Best Buy CEO Hubert Joly has said that the company is eyeing the smart home as part of a broader growth strategy. “The increase in complexity and interoperability of technology products and the advent of the Internet of Things are making Best Buy’s operating model increasingly relevant as customers want and need more help selecting, installing, connecting, integrating, using, maintaining and taking full advantage of their products,” said Joly in August 2015.

Courtney says that telecom giants like AT&T, Verizon and Comcast are likely to edge in the market via security systems and then offer to manage customers’ smart homes for a monthly subscription fee.

Many smart home items are going to need battery backups, says Courtney. Telecom providers are used to installing battery backups and other redundancy systems. “One big challenge is that if the power goes out, so does your Internet and smart home hub. You lose control of the house,” he says.

With standards and technologies for the smart home still being sorted out, it’s a bit early to ponder integration efforts, but it is clear most consumers will need help. “This isn’t plug-and-play today, and the smart home is a market for the tech hobbyist,” Courtney notes. “You almost need to have a mini-IT guru at your house.”