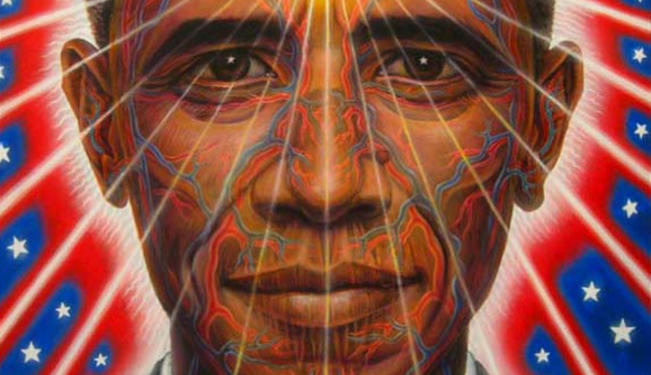 By Luke Hiken and Marti Hiken

A view on how Obama's presidency represents contrary personalities of his, making him one of "the most despicable Presidents" the US has endured.

In 1957, Joanne Woodward won the Best Actress Oscar for her captivating portrayal of Eve White, a woman suffering from what was then described as Multiple Personality Disorder. The movie, entitled The Three Faces of Eve, captured the contradiction of sick individuals who suffered from that type of schizophrenia. The Eve of the movie actually possessed many fragmented personalities. It should be obvious at this point that the President of the United States, Barack Obama, suffers from the same disorder:

Obama himself endorses the self-image of one who is a compromiser, negotiator and peacemaker. He supposedly brings together politicians of differing persuasions, and convinces them to reach agreement on the various problems facing the nation. According to this persona, the President is able to put aside his own supposedly liberal views, and produce legislation and foreign policies that are far to the right of his own personal wishes. Thus, he keeps Guantanamo open, despite his campaign promise to shut the torture chamber down. He pays off Wall Street thieves, bankers and crooks who steal from the American people, and punishes none of them. He deports more immigrants than the racist George Bush, and he imprisons more black people than any other President before him.

Obama, the compromiser, has kept only one promise since he first took office: He raised a billion dollars to assure his own reelection. Other than that, he has been so quick to compromise with right wing forces that his own party spends much of its time rationalizing why they have abandoned the party’s base in order to placate the Tea Party.

In this posture, Obama is the craven coward, and weak-kneed sell-out who would do anything that those in power told him to do. This unprincipled shadow of a man wouldn’t have the courage to say no to any war, international slaughter, or assault that any officer in uniform demanded of him. He would drop unmanned drones on women and children and pretend not to have had any input whatsoever into whether or not to use these weapons of a war criminal. He would wage war on any defenseless nation the Pentagon ordered him to attack.

This shallow coward would never question the conduct of the Wall Street gangsters who have impoverished the American people, as well as those of other countries. And most importantly, he would turn the other way while American prisons grew beyond their capacity, locking up the greatest number of African Americans in history.

As the frightened, spineless agent of military industrial giants; this variation of Obama can hide beyond the pretense that he is not responsible for the dastardly, destructive policies of the government, but rather, he is merely a lackey and errand boy for the rich and powerful. Poor, weak Obama.

This persona is the laughing, cocky, athletic, neo-conservative president who has brought you the mass murder of tens of thousands of Muslims, has enthroned Wall Street and the Pentagon to the point of Empire building, and who is proud of his exploits and status. He is unapologetic for his assaults on the American people, and those throughout the world. He passes the NDAA gleefully, letting Americans know that if they cross this macho president, he can have them arrested and imprisoned without trial, and held incommunicado indefinitely. He will not only keep Guantanamo open, without justification or explanation, but will use torture chambers in other U.S. bases throughout the world for those not deemed friendly enough to U.S. imperialism. He will protect the privileges and power of the wealthy, even if it means locking up the remaining 99% of the population. Government surveillance and intervention into the private lives of our citizens is the hallmark of Obama’s actions.

This Obama is a knowing, conscious fascist and his only chance of reelection lies in the utter incompetence and stupidity of his Republican opposition. By being the lesser of two evils, he can murder Muslims at will, seize the homes and wealth of the American people and distribute it to the rich, and he can build a police state in which no citizens are free to demonstrate publicly against any decisions made by the government.

This Obama is neither a coward, a compromiser, nor even a person of serious political persuasion, right or left. He is merely one of the most self-serving, opportunistic egomaniacs who has ever been elected to office. He is so unprincipled that he doesn’t even consider the repercussions of his foreign or domestic decisions on anybody but himself. So long as he remains on top, he can kill whatever “foreigners” he wants to, he can imprison every black person in the country (if it will get him more votes), he can deport as many Mexicans as the racist public calls for, and he can bend to every rich person and corporation in the country, regardless of the harm they cause, so long as they support him financially.

This Obama would say and do anything, without regard to any sort of morality, so long as it would assure his own advancement. He will leave a legacy as one of the most unprincipled leaders in the country’s history. Considerations of truth, justice, and fairness are so meaningless to this man that they don’t even enter into the equation of what decisions he will make. Just as capitalism thrives on greed and getting ahead at the expense of others, the unprincipled opportunist makes decisions based on what is in his own self-interest, regardless of how those decisions affect others.

The astute reader would immediately recognize that it doesn’t matter one bit which of these multiple personalities accurately reflects the real character of our President. In reality, the results are the same insofar as his domestic and foreign policies are concerned. While he is certainly preferable to the opportunistic, privileged dog running against him in the election, there remains a serious question as to just how evil and corrupt the lesser of two evils must be before intelligent voters simply opt out of the election altogether. I expect that there might have been distinctions between Hitler, Himmler, Goebels and Eichmann that might have rendered one of those individuals less contemptible than the others, but casting a vote for any of them would seem to defy rationality.

Obama’s catering to the rich, his subservience to the Pentagon, his complete disdain for the civil liberties and needs of the citizens of this nation make him one of the most despicable Presidents this nation has endured. And given the likes of the Bush family, Ronald Reagan, Richard Nixon and their ilk, that is a tragic commentary about the quality of characters we elect to office in this country.