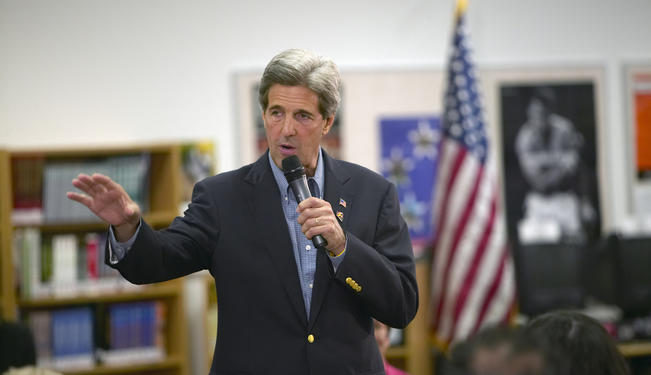 Syria's appalling civil war must come to an end.

The agreement that US Secretary of State John Kerry and Russian Foreign Minister Sergey Lavrov recently hammered out in Geneva will, if implemented, prove a milestone in the century-long effort to contain the horrors of modern war. For the first time, the world community will have compelled a country that has used weapons of mass destruction within its own borders in suppression of an armed insurrection to relinquish them to international control and destruction.

It had taken Saddam Hussein's defiant annexation of Kuwait, and a war to expel his forces, to subject Ba’athist Iraq to such measures; no one in major capitals much cared when he gassed Iranian infantry or Kurdish civilians. A desperate Ba’athist regime in Syria that resorted to episodic use of chemical weapons has discovered that even its closest allies would desert it for breaking the poison-gas taboo.

In this respect, President Barack Obama's determination to rally global opposition to confront the Syrian challenge on chemical weapons has unexpectedly succeeded in strengthening not only the global ban on their use, but the multilateral foundations upholding international peace and security. Americans had faced the prospect of a one-off military strike that might touch off an unpredictable chain of events in the region, but would with certainty undermine respect for the UN Charter globally. Instead, the United Nations will implement the inspection, control, and accelerated dismantling of Syria's chemical weapons stockpiles under a Security Council mandate.

The Syrian government affects to renounce voluntarily these weapons stockpiles that it had never before acknowledged having. This is a convenient fiction for those concerned about safeguarding national sovereignty from international interference, but it is clear that Syria's sudden accession to the chemical weapons convention was either coerced or a deathbed conversion. Damascus authorities were plainly rattled by the threat of a US military strike – and, perhaps not so plainly, by Russian and even Iranian pressure to come clean on gas.

Already Washington echoes with the refrain that this negotiation succeeded only because Obama wielded a "credible threat of force." But before Washington gets carried away with the heady notion that its threat of missile attacks will cut through other Gordian knots – whether Bashar al-Assad's departure or Iran's nuclear program or China's claims to offshore islands – it had better get a grip on the real ingredients of Kerry's diplomatic success.

First, the threat of military force had already lost its credibility once the head counts in Congress showed the war authorization was doomed in both houses. If Obama had proceeded to military action anyway, he would have faced his own regime crisis, domestically as well as internationally, for riding roughshod over the legal limitations on waging war in both the US constitution and the UN charter. Whispers of impeachment were already in the Washington air, and Obama internationally seemed quickly to be assuming the detested plumage of another George Bush.

Second, Obama had carefully described the object of US military wrath as the flagrant use of chemical weapons, the "norm" that Kerry cited to a skeptical Congress. This limited purpose put Russia on the defensive (and even more so Iran, the world's biggest victim of chemical weapons use since Mussolini's invasion of Ethiopia). Vladimir Putin went so far as to volunteer that if there were solid proof that Assad's forces had gassed Ghouta, even he would supposedly support a punitive strike.

Third, UN inspectors on the ground promptly visited the site, ensuring there would quickly be an internationally verified account of what really happened. The Russians eventually realized that the UN findings would not easily square with Damascus' shifting charges of rebel responsibility. The secretary-general's recent report put beyond question that the attacks were of sarin gas delivered by surface-to-surface missiles – both of which are in the Syrian government's arsenals.

Obama's determination to make Damascus pay a heavy price for upping the ante on chemical weapons did create a sense of crisis. Without that crisis, there would have been no opportunity to effect a landmark precedent. Scaffolding that crisis around a core principle to which even Assad's allies subscribe created the pathway to a diplomatic solution.

Try threatening a strike to make Assad step down, and it will blow up in our face: The Russians will invoke with vehemence the principle of state sovereignty and noninterference in a country's internal politics. Nor are they alone in having a narrow view of the "responsibility to protect" that Western interventionists interpret so expansively. Churlish commentaries that Foreign Minister Lavrov is a "Mr. Nyet" miss his personal commitment to the UN and international law – and the resonance that commitment has in the international community.

The spotlight on the international legal architecture against chemical weapons, which Syria's accession and the new Security Council resolution's adoption will strengthen, might remind us that America's own adherence to the chemical weapons convention was bitterly contested. The "strong defense" right-wing of the Republican party mobilized no less than 26 Republican senators to vote against US ratification of the convention in 1997. None has yet to acknowledge his vote against it was a mistake.

Finally, the apparent resolution of the Syrian chemical weapons crisis – and the ferocious public opposition to being sucked into another Middle East war that the crisis uncovered – should not lull Washington into thinking the war can just go on as before. It becomes even more urgent to bring Syria's appalling civil war to an end. Recently, I outlined an approach to do just that, drawing on the Security Council action to end the Iran-Iraq War in 1987. Other approaches may prove better. Let's just do it.