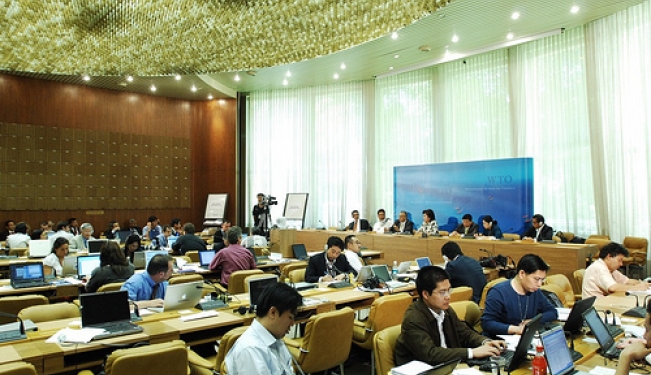 Testimony before the Joint Economic Committee of the United States Congress, hearing on “Manufacturing in the USA: How Trade Policy Offshores Jobs” (full text available in downloadable pdf below)

This testimony draws upon my forthcoming book, “Eclipse: Living in the Shadow of China's Economic Dominance,” my article in Foreign Affairs with Aaditya Mattoo, From Doha to the Next Bretton Woods” and my forthcoming paper with him, “A China Round of Trade Negotiations." Underlined text indicates links to supplementary material.

1. In the post-World War II period, open trade, by lowering prices, increasing consumer choice, and promoting exports, has been a force for economic prosperity for the United States. Creating and maintaining an open trading system, which has helped countries around the world to improve their living standards, has been one of the major achievements of the United States and its global leadership. Trade with China has also been, on balance, good for the United States, and overwhelmingly good for China.

2. But increased global integration can impose distributional costs domestically on certain relatively lower-skilled workers and certain communities. Certain aspects of China’s trade, notably its exchange rate policy, have also had adverse effects for the US which are pronounced in the current climate of high unemployment and under-utilization of resources.

3. For the United States, international competitiveness begins at home. For the medium run, this entails strengthening American technological capability and leadership, improving the education system, and creating a regulatory climate that fosters entrepreneurship and innovation. For the short run, the best way of coping with the adverse effects of trade is to strengthen the social safety net through assistance for those affected by trade and other technology-driven developments. This would also shore up political support for open trade at a time when this support is dwindling even amongst those traditionally in favor of free trade.

4. The United States must also engage internationally to maintain the current rules-based multilateral system. This is especially critical if the United States is to transition toward a growth model that is less reliant on consumption and more on investment and exports, and meet the export goals set by President Obama. Moreover, United States has substantial comparative advantage in tradable services, which could be further exploited through market opening abroad.

5. China will be a critical part of this international engagement.  But China has become too economically dominant for the United States to engage with China on its own.  That is one of the major changes that have occurred in the world economy over the last decade. Fortunately, the desire and concern to ensure that China’s rise will remain a force for good is widely shared amongst other industrial and developing countries. This provides an opportunity for the United States to lead a collective effort—muscular multilateralism—to engage with China on trade issues. Moreover, because China’s economic development has benefited enormously from an open trade system, it will have a stake in preserving it.

6. A concrete way to realize this is to move beyond the Doha Round to start a new round of multilateral trade negotiations—a possible “China Round”—that would focus on the issues—exchange rates, government procurement, services, technology policy, commodities, and climate change—which are particularly crucial for China’s trade relations with the US and with other large trading nations.