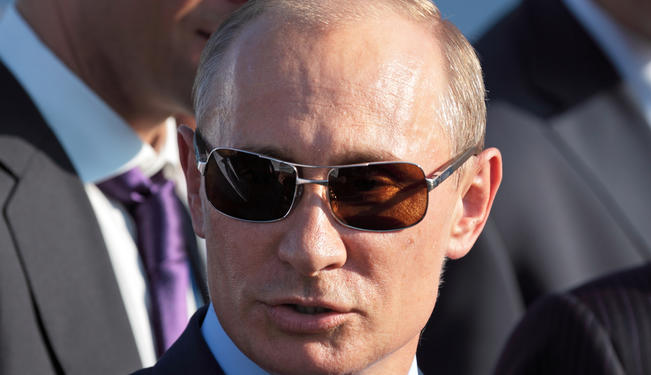 Bungling with Russia over Crimea will send the West knocked out with a bloody nose.

One way or another, it was a crisis a long time coming. Europe has arguably sleepwalked into a reluctant confrontation with Russia. The continent’s next-door behemoth of a neighbor, saddled by a man it secretly detests the most, is also its largest energy supplier, irascible trading partner and purveyor of most maladies diplomatic.

How do you brawl with the bear who also lights your bulb? Push the beast into the corner over its actions in Ukraine and he severs your pipelines, among other things, with lip-smacking savagery. Do nothing and you hand him a license for future rampage, not to mention also massively slashing your global political capital in a single swipe.

While making sanctimonious noises and barge-poling at Moscow over Iran and Syria from the relative safety of UN corridors has been easy for London, Berlin and Paris, the crisis in Ukraine has left Europe’s string pullers almost hanging by a thread.

The past week in Ukraine has sped with the swiftness characteristic of a Bond film plot. Even before the Ukrainian opposition could dust off its clothes after dispensing with President Viktor Yanukovych in a swift yet bloody revolution, unmarked "pro-Moscow" gunmen had swooped in to Crimea to promptly seize key buildings, the Russian parliament overnight approved the use of military force in Ukraine and, adding a treacherous twist to the climax, the country’s new Naval chief ditched his comrades in Kiev within hours of his appointment.

A rudely awakened Obama administration has expeditiously declared Russia is on the wrong side of history. But Russian President Vladimir Putin hardly thinks so. Crimea, the territory jutting out into Black Sea, is an old wound, opened and re-stitched several times between Moscow and Kiev.

The peninsula was gifted to Kiev by former Russian President and half-Ukrainian Nikita Khrushchev, a decade after its entire 300,000 population of Muslim Tartars had already been deported in 1944 for supporting the Nazis by his predecessor, Joseph Stalin. The territory’s majority Russian-speaking population, most of whom have Russian passports, alone makes it a "valid" reason for Putin to act proactively.

In what appears to be a never-ending climax, the Crimean MPs have now declared their intentions to join Russia, subject to a hastily proposed referendum on March 16. Regardless of whether the southern Ukrainian region eventually joins Russia or not, the standoff has evolved into a dangerous precedence.

Putin’s critics, who have long accused him of harboring expansionist desires, are quick to point out the current situation is eerily reminiscent of Russia’s military adventure in Georgia in 2008 over South Ossetia and Abkhazia. While the 5-day war had ended with Tbilisi losing both face and territory, leaving behind a trail of death and destruction, Moscow had appeared to walk away like a briefly bothered beast who only had to growl and punch.

For the West, however, the Crimea crisis has blown into a quagmire that no one, including Washington, is sure how to scurry out of. As the situation currently stands, Russia is growling, Ukraine is yelping, and the West is looking like a deer caught in bright headlights. Before anyone could blink, NATO was given a massive headache.

Looking flaccid is bad for diplomacy. But for now, Europe has a much bigger problem than that at hand. Even as whispers of a return to the Cold War get louder, the benchmark price for oil has risen up by 2% almost overnight. At $112, Brent crude oil has just touched its peak for 2014. Economically, there cannot be a worst time to show knuckles to a country that meets one-third of your energy needs, 80% of which flows through Ukraine, ironically.

Russia is ruthless when it comes to business and everyone in Europe knows about it. In 2006 and 2009, when Moscow turned off its tap to Kiev amid intractable price disputes, the disruption had resulted in a stinging rise in gas prices and shortages across Italy, Hungary, Austria, Poland, France, Germany and Bulgaria among others, while Slovakia was forced to declare a state of emergency.

Currently, Russia is the second largest producer of oil in the world and its gas giant, Gazprom, controls over 20% of global gas supplies. Even though Europe has sufficient gas reserves for now, the fear over a potential military showdown in Crimea is already unnerving the oil and gas market. Ukraine’s reliance on Russia for more than 50% of its energy needs makes its new regime even more vulnerable than it already is.

Sadly for European powers, the problem does not end at energy. Russian businesses and oligarchs have grown deep roots into Europe’s financial, media, sports, construction and real estate sectors.

Apart from meeting nearly 40% of its oil and gas demands, Russia is also Germany’s biggest trading partner. For Britain, the former communist nation is the fastest growing major export market. Since 2001, bilateral trade volume between the two has grown by 21%.

Singularly dominated by Russian investors and businesses, London’s prime multi-million real estate market is already feeling the jitters of the crisis thousands of miles away. British energy giant BP, which has a 20% controlling stake in Russia’s Rosneft, has lost $849 million on its investment overnight.

France is feeling the heat too. The crisis in Crimea has overshadowed its $1.6 billion defense deal with Russia to supply an advanced warship.

Russia, in its post-Soviet avatar, has emerged as one of the fastest growing economies and attracted billions of dollars worth of foreign investment in the last two decades. An early capitalist society booted by its oil wealth, Russia’s prodigious appetite for consumer and luxury products, services and expansion of retail sectors has seen multinationals from Germany, America, France and Spain pump in massive investments into the country.

If anything, Russia’s economy is far more robust than all of its Western trading partners together despite the global financial slump. With one of the largest foreign reserves, slim budget deficit and a big slice of the global oil and gas market, the country under Putin is in the best economic shape in decades.

The Problem with Rhetoric

The West has sternly demanded that Putin keeps out of Ukraine. But the governments in London, Paris and Berlin are hardly able to summon the appetite to match tough words with tough actions. Moreover, there appears to be no consensus on what these tough actions should be anyway.

Imposing economic sanctions on the Kremlin is a potential boomerang. Any disruption in business as a result of punitive measures against Moscow will bleed Europe more profusely than Russia.

The British government’s advisors seem to favor "smart or limited sanctions" like freezing of assets and visa bans on key figures in the Kremlin over full-blown measures, such as those against the Syrian and Iranian leadership.

But that poses even a bigger headache: Should they slap bans on the most key figure, the Russian president himself, and make the problem even messier? Most importantly, will Putin really care? Such a move will inevitably follow a tit for tat reaction from Moscow. Worse, antagonizing Putin might do just what the West is fearing the most — escalate the tensions into a full-blown military showdown.

The French are looking conspicuously reluctant too. According to the latest reports, the French have promptly dispatched the warship they built for Russia despite Paris’ criticism of Moscow’s action in Crimea.

The most worrying, however, has been the babble of noise from Washington about "isolating Moscow." Condemnations have flown thick in the face of US President Barack Obama, who has sharply come under attack at home for his "weak response" despite leaping to the phone to Moscow as soon as Russian troops fanned out in Crimea. After hurriedly dispatching Secretary of State John Kerry to Kiev came the suspension of all military ties with Russia. Leading the offensive, Obama also swiftly pulled out of the upcoming G8 meeting in Sochi. France and Britain promptly followed suit.

Despite all the frantic diplomatic flurry, Obama has never looked as much limp as Putin has appeared strong. To speak in the boxing equivalent of power projection contest, the Russian president has so far packed-a-punch in all the rounds.

More worryingly, the crisis has lain bare — to Putin’s immense satisfaction — a growing rift between the US and its European partners over how far each side must push in order to punish Russian belligerence.

Backed by Sweden and other eastern European countries, the Obama administration is pressing hard for brutal sanctions. Germany, Italy, Spain and France on the other hand think the US is asking too much of them. With hardly any strategic economic interests at stake, it’s easier for Washington to bluster about trade embargoes, they claim.

The West’s murky and treacherous history with Russia means there will be no easy answers to how the international community should confront Putin, if at all.

But the inescapable truth of the situation is that no solution, either economic or political, for both Kiev and Crimea can succeed without also taking into account Moscow’s interests. Russia lies right beside Ukraine and no amount of wishful thinking will wipe away its next-door neighbor. Diplomacy dictates that if you can’t play against the enemy, play with it.

No matter how the crisis over Crimea boils down, the latest standoff by no means, and contrary to all warmongering, will herald the revival of the Cold War.

Nevertheless, the Western powers now have to play their best ever game. If Crimea goes crimson, the faces all over the world will go red.