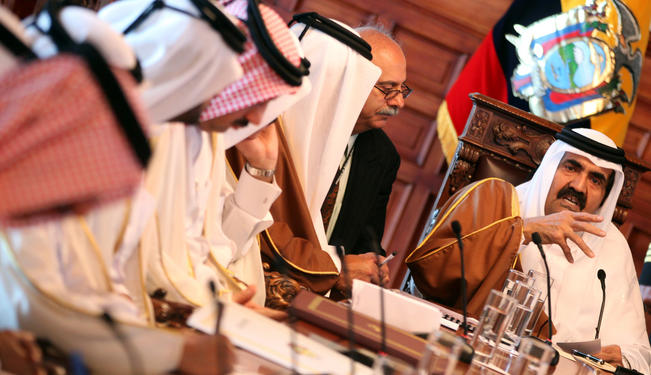 David Holdridge, a frequent visitor to Qatar over the past decade, argues that sooner rather than later the US will realize that it should distance itself from the autocracies of the Gulf. Oil and military concerns aside, the Arab street will not tolerate these medieval structures much longer.

Not long ago, I found myself on the pavement on West 23rd Street in lower Manhattan. Just outside the door of this beautiful red brick monster – walking toward a bar called “East of 8th” for a couple of shots and a burger.

I had spent the day uptown trying to get my head around the question of what makes Qatar tick. I had listened to our esteemed Secretary of Transportation, Ray Lahoud, describe Qatar as the exemplar of what Barack Obama had meant at his June 4, 2009 speech in Cairo.

And of course, if that didn’t get you scratching your head, then the encomium delivered by Exxon’s CEO, Rex Tillerson, on the “made in heaven” arrangement between America and Qatar made you wonder whether if Benghazi had not happened, would we be hearing the same from Lahoud and Tillerson about Muammar Qaddafi.

Anyway – on one hand, of course, we all get it. The world needs liquefied natural gas (LNG); Qatar is a defensible peninsula full of hydrocarbons and American companies get the lion’s share while our fleet protects the source. Not too complicated. Qatar throws up a few fighters to fly “wingtip to wingtip” with the coalition over Libya while Bechtel builds its new Doha International Airport.

And in fairness, Doha does more. It opens a new museum every other year, and transfers a brick and mortar replica of an American University every three years. It also manages to be a royal pain in the ass to every backward despot in the region (other than in the Gulf) by loosening Al Jazeera upon their infractions.

But go to Doha. Go to this city on the Gulf and you will be stunned. It is Potemkin writ magnificent – larger than ever before in history. You will see a plethora of skyscrapers and remolded souks but not one ounce of vitality; no signs of struggle; and no hint of the classic bottom line. At least, not where the 250k Qataris enjoy cradle-to-grave luxury, while the other million residents from Asia work at their pleasure. That’s right, 75% of the resident population has no rights of citizenship. They had no vote either way for the current Emir who rode to power in a coup against his father in 1995 and who must now have some very penetrating  looks into his son’s eyes; a boy already declared “heir apparent”, while his mom, Sheikha Mouza, sprinkles some largess around and vies with Queen Rania as the West’s darling.

So, there we were at the Waldorf Astoria, in this world class presentation for Qatar – American amity as this most spoiled of all Arab tribes touts its pre-eminence. Protectors of the North field, they are. Keepers of the well inside the American perimeter, while a straight drive across the peninsula gets you to Egypt, an Arab neighbor with more than 82 million strong, I am told; 12 million day laborers who make $2 a day, who revile these Bedouins gone bad and look longingly at their riches for a modicum of surcease.

So, belly filled and mind a bit expanded I clacked down the street past the pan handlers, musicians, street vendors, working stiffs, dealers and gentry and back into the Hotel Chelsea. Here, Borroughs, Dylan Thomas, Bob Dylan, Ginsberg, and so on, incubated the music and prose to inspire the world, clacking down those threadbare and day-glow halls to my metal frame bed for the night. With an original radiator spitting steam, I knew one damn thing for sure: that there was more dynamism in the walk I had just made from East of 8th to Room 718 than in all of Doha, and that America was sadly on the wrong side of history in this particular instance.