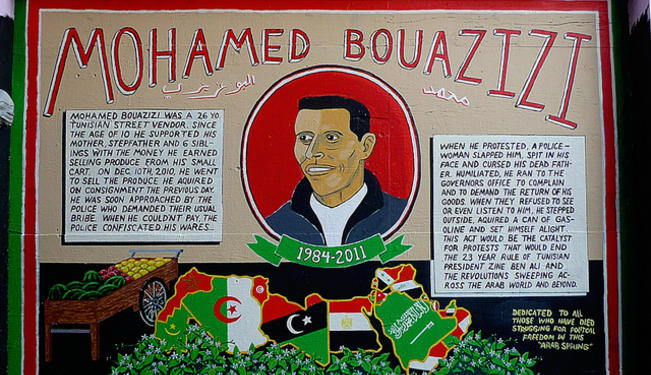 The popular revolts sweeping the Middle East and North Africa are part of a global demand for political openness and transparency. Southeast Asia has so far proven adept in its response but has yet to address fundamental issues.

Tunisian Street vendor Mohamed Bouazizi’s self-immolation was not simply a cry for justice, freedom and economic opportunity. It was an act of desperation in the face of humiliation, a cry for dignity that resonated with the masses across North Africa and the Middle East.

Bouazizi's death sparked a move to end not just the yoke of tyranny but of neo-patriarchic rule in which the autocratic father figure replicates himself throughout society from head of state to village chief to the head of the nuclear family. The system franchised authoritarian rule. As a result Bouazizi’s cry for dignity was and is a quest for citizenship rather than guardianship, for legitimate authority, transparency, and ultimately true sovereignty.

Arguably, more than anything else, Bouazizi’s cry integrated the relatively inward-looking region from Morocco to the Gulf into a globalised world. The region became part of a global trend and in some ways is most resilient, poised to rewrite political geography. The demand for openness and transparency, fuelled by a perceived failure of existing institutions, manifests itself in different ways in different parts of the world. In the West it's Occupy Wall Street. In the Middle East and North Africa, pushing for greater transparency often meant violence to change ossified dictatorships incapable of accommodating people's aspirations and reform.

Myanmar has cautiously relaxed strict government control, Malaysia responded to sharp criticism of the police by repealing two sweeping security laws and lifting restrictions on the media and Thai voters returned to power the party of deposed premier Thaksin Shinawatra, a victory for his red-shirted supporters involved in bloody clashes with the military last year. In doing so, Southeast Asian governments have proven to be far more attuned than their Middle Eastern and North African counterparts to what was happening around them and have displayed a greater deal of vision and flexibility. Nonetheless, they will also require forward planning.

When, rather than if, the Arab uprising inevitably spreads to the Gulf, Southeast Asian nations will have to define the risk to their energy security and develop alternatives in case of a disruption in oil and gas supplies as well as increase their focus on alternative energy options. Some, like the Philippines, will also have to deal with the impact of large numbers of migrant workers returning home to escape erupting turmoil.

Non-oil producing Southeast Asian nations like Singapore, Thailand, and the Philippines depend on the Middle East for 70% of their oil and gas imports. In addition, Southeast Asia and the Middle East are crucial links in a seaborne commerce conveyor belt that runs from the Gulf to the Pacific. If the Straits of Malacca and Singapore were seen until now as potentially risky maritime choke points, today it is the Strait of Hormuz in the Gulf and Bab el Mandeb between Somalia and Yemen that are more vulnerable.

Asia would be most affected if shipping particularly through the Straits of Hormuz were to be interrupted. The United States gets 22% of its oil from the Gulf, Europe about 30% but Asia all of 75%, which makes Asia having the most at stake in terms of energy security.

Almost a year into the Arab revolt, the Middle East and North Africa region is looking at up to a decade of volatility, uncertainty, and bloodshed. The region may be the part of the world where resistance to change will prove to be most adamant with consequences far beyond its borders.

Southeast Asian nations, unlike those in the Middle East and North Africa, with few exceptions have demonstrated an ability to respond to demands for openness and transparency and sought to restore confidence in institutions in ways that do not escalate tensions. Nonetheless, steps taken by Southeast Asian government are likely to prove insufficient. Those steps are by and large designed to remove immediate lightning rods and release pent-up frustration but often do not really address basic grievances, among which corruption figures prominently.

A majority of Southeast Asian governments, unlike their Middle Eastern and North African counterparts, enjoy varying degrees of popularity and legitimacy. To the extent that there is a desire for change, it is a desire to effect change with the government, not in spite of it. That is an asset few Middle Eastern rulers can claim. But to maintain that strategic advantage, Southeast Asian nations will have to develop enlightened, proactive policies that go beyond removing immediate irritants and address real concerns.

*[This article was originally published by RSIS on November 30, 2011].