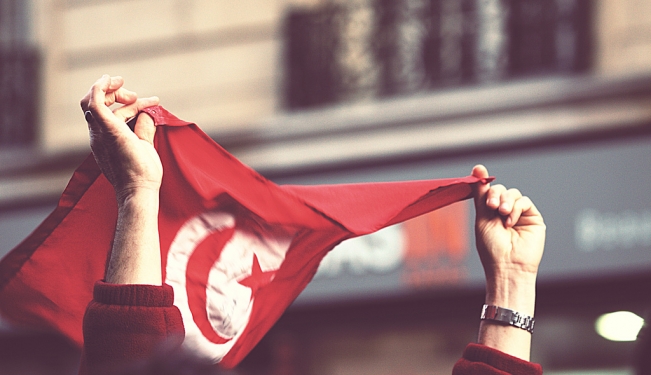 Often overlooked in the western press have been the collective, or one could say national, grievances of the Tunisian people, expressed as frustration at Tunisia’s lack of real sovereignty in a global order enforced by international institutions such as the IMF and the World Bank.

Though the dramatic events of the last few months have provided much cause for hope in Tunisia, many obstacles remain along the path to constructing a new polity capable of addressing not only Tunisians’ political and individual grievances, but their socio-economic and collective grievances as well.

Much of the attention on the causes of the revolution have focused on longstanding structural issues, including the government’s distorted budget priorities, with too much money invested in repressive security apparatuses and too little in infrastructure and social goods such as healthcare, education, training, or job creation. Add to this, the restrictive labour policies, suffocated public sphere, distorting wealth concentration, and the developmental gap between coastal areas and the interior.

Many Tunisians, especially those on the receiving end of Tunisia’s ‘justice’ system, including trade unionists, leftists, and, in particular over the last ten years, those with Islamist leanings, have expressed anger about the lack of due process, absence of the rule of law, widespread use of torture, and generally dismal prison conditions in Tunisia.

Often overlooked in the western press, however, have been the collective, or one could say national, grievances of the Tunisian people, expressed as frustration at Tunisia’s lack of real sovereignty in a global order enforced by international institutions such as the IMF and the World Bank, and under the guise of ‘economic modernization’, ‘democratization’, and, most recently, and perhaps for Tunisians most damaging, the ‘war on terror’.

National grievances
It was to study these latter grievances that from March 12 to 19, 2011, we joined a group of  lawyers, human rights activists, and academics, based in the US, UK and Turkey to visit Tunisia at the invitation of the Tunisian National Bar Association. The report that came out of this visit, Promises and Challenges:  The Tunisian Revolution of 2010-2011, discusses Tunisia’s history under the disgraced Ben Ali regime and the conditions and events which led to its downfall in January 2011. In particular, the delegation was interested in understanding the role of the US and EU states in supporting the Ben Ali regime, despite knowledge of its numerous and persistent human rights violations.

Our delegation met with various organizations and individuals, including those who had been on the receiving end of Ben Ali’s most brutal policies and practices, those who had been involved in contesting and resisting the gross human rights violations of the ancien regime, as well as those, including many from the former two categories, that had been instrumental in bringing down the Ben Ali government.  These included heads of NGOs, labour leaders, leaders of oppositional political parties, journalists and bloggers, as well as many former political prisoners and torture victims of the deposed regime.

One grievance that was expressed repeatedly by these various political actors was the perception that western governments had been complicit in the crimes committed by the Ben Ali regime, through their provision over the years of copious amounts of diplomatic, military, and economic support, in particular in the past ten years, in the context of the ‘war on terror’.

Not only did many feel that western governments had too often turned a blind eye to the depravities of their Tunisian allies in order to secure their own economic and geo-strategic interests in the region, but, even worse, many suspected that some of Ben Ali’s most heinous crimes were committed at the behest of these governments.

Tunisia was among several Middle East and North African states that declared its support for the ‘war on terror’ and offered substantial intelligence and strategic cooperation shortly after George W. Bush’s infamous speech of 20 September 2001, in which he warned:  “Every nation, in every region, now has a decision to make. Either you are with us, or you are with the terrorists. From this day forward, any nation that continues to harbour or support terrorism will be regarded by the United States as a hostile regime.”

In return for its cooperation in the ‘war on terror’, the US was willing to overlook the well-documented human rights violations of the Ben Ali regime, and indeed, political repression actually increased during this period.

In addition to increased security and intelligence cooperation, many of the lawyers, activists, and former political prisoners we met asserted their belief that the 2003 Anti-Terrorism Law was enacted to curry favour with the US. Although it is unclear what precise role the US played in the wording or timing of the legislation, it is clear that the Bush Administration was happy with its passage. The US State Department called it ‘a comprehensive law to “support the international effort to combat terrorism and money laundering.”

Discrepant narratives
Yet critics, both domestic and international, claimed that the law heavily violated Tunisians’ civil liberties. According to a December 2010 Report of the United Nations Special Rapporteur on the promotion and protection of human rights and fundamental freedoms while countering terrorism, the Tunisian legislation is based on a definition of terrorism that ‘is vague and broad, hence deviating from the principle of legality and allowing for wide usage of counter-terrorism measures in practice.’ The law resulted in the arrest and often torture of thousands of innocent people, solely because of their religious and/or political beliefs and practices.

According to former Tunisian Judge Mokhtar Yahyaoui, founding member of the Association for Support of Political Prisoners who was pushed out of his job due to his vocal opposition to judicial interference, the 2003 Anti-Terrorism Law was a direct result of US pressure for greater Tunisian cooperation in the ‘war on terror’. He stated his belief that US military assistance to the Tunisian government was conditioned upon Tunisia’s counter-terror cooperation and accused the Ben Ali regime of ‘selling our sons to the Americans’ as part of this effort.

Though US president Barak Obama has now become a vocal cheerleader for the ‘Arab Spring’, it will be difficult for Tunisians to forget the many years in which successive US administrations, including Obama’s, maintained close relations with the Ben Ali regime despite their knowledge, as documented in numerous State Department Annual Human Rights Reports and confirmed by Wikileaks’ release of statements from the US ambassador to Tunisia, that it was patently corrupt and repressive.

From recent statements made by Obama, and proposals discussed by G8 leaders as well as the IMF and World Bank regarding the provision of funds to promote ‘economic reform’ and ‘private sector’ investment in Tunisia, it is unclear whether any lessons have been learned about the causes of the Tunisian revolution. The civil society and political actors with whom we met invariably expressed a vision of a future democratic Tunisia, marked by balanced development, equality, and social justice. However, economic growth driven by foreign investment under IMF dictates is generally associated with precisely the type of unbalanced development and income disparity that generated the socio-economic collective grievances leading to the Tunisian revolution.

Furthermore, statements made in Obama’s May 24 speech to the British parliament suggest either a failure to comprehend, or to ignore, the collective political grievances articulated in the revolution. Despite expressing US support for democratic change in the region, Obama claimed that Americans ‘must squarely acknowledge that we have enduring interests in the region: to fight terror with partners who may not always be perfect,’ thus over-looking the perception of many Tunisians that the repression they experienced for years at the hands of a brutal tyrant was facilitated, if not enabled, by US/western support.

It is clear that a significant gap exists between the perceptions of US government officials, who believe they were strong critics of the corruption and human rights abuses of the Ben Ali regime, and the Tunisian people, who perceived the US as supporters of that regime, complicit in its human rights abuses.  It is the conclusion of our delegation’s report that the US will fail to gain respect and credibility in this dramatically transformed region unless it recognizes this gap and honestly explores the reasons behind it. Ultimately, it is in the best interests of both western and North African/Arab states that lessons learned from this exercise inform future relations, based on the strong foundations of equality and mutual respect.
This article was originally published by the openDemocracy website.