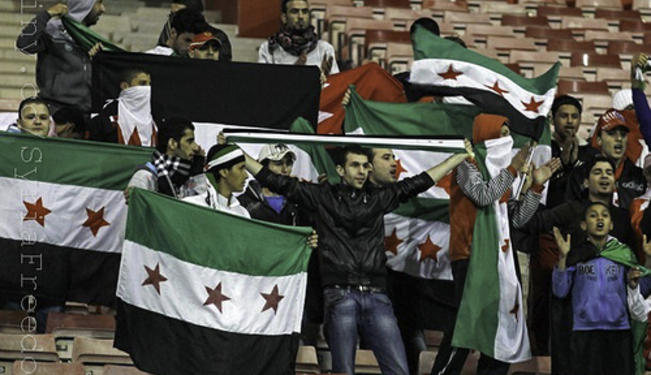 Commentary and insight on the unexpected links between soccer, and sport in general, and Syria’s authoritarian regime.

A celebrated national soccer team goalkeeper, singer of revolutionary folk songs and supporter of the uprising against Syrian President Bashar al-Assad in the city of Homs, Abdel-Basset Saroot is the exception that confirms the rule in a world in which soccer stars have largely stayed on the side lines of mass protests sweeping the Middle East and North Africa.

For much of the last year until Syrian forces loyal to Assad entered Homs in March 2012, Saroot led protests by crooning in the neighbourhood of Baba Amr. These days he leads the life of a marked man on the run rather than that of a feted and upcoming soccer star. He avoids daylight, travelling only at night. Constantly on the run, he never stops moving and stays at any one place at most a few days.

After three attempts on his life, in which 12 people were killed, including his brother and some of his closest friends whose bodies were dumped on a street and crushed by tanks, he recently called for NATO military intervention, and denounced Syrian exile opposition leaders for leading a life of luxury in five-star hotels and obstructing efforts to persuade the international community to intervene. Saroot was lying on a cot covered by a blanket as he recovered from injuries he allegedly suffered in the last attack.

More than a year into the rebellion against Assad’s rule, Saroot may have led a somewhat less perilous life had he not joined the rebellion, but probably not a more glamorous one. In a sign of the importance of soccer in Middle Eastern and North African politics in general and for Assad’s embattled regime specifically, the government has unsuccessfully gone to great lengths to use the game as evidence that it remains in control and is functioning normally. As a result, players’ reputations have been tarnished both among those segments of soccer-crazy Syrian society that are opposed to Assad, as well as internationally.

Syria’s national soccer teams have flagrantly set rules aside in recent months in their line-ups to ensure success on the pitch, in the hope that success in soccer would rub off on the regime. The world soccer body, Fédération Internationale de Football Association (FIFA), barred Syria in September from competing for the 2014 World Cup in Brazil after the country’s national team fielded an ineligible player in a qualifying match against Tajikistan. Lebanon accused Syria in November of fielding six players in an Under-19 Asian Football Championship qualifier whose ages had been falsified to qualify them for the team.

By the same token, Syria refused to send athletes to the November 2011 Arab Games because it feared embarrassment if some of its sportsmen defected.

Saroot is a living symbol that this fear may not be unfounded. It also suggests the problems the Assad regime has in ensuring that the country’s athletes toe the party line. Syrian security forces last summer arrested national soccer goalkeeper Mosab Balhous on charges of sheltering armed gangs and possessing suspicious amounts of money. Unconfirmed reports said a third soccer player, Ahmed al Sheban, was killed in Homs under unclear circumstances.

Saroot and Balhous stand out in a region in revolt, where soccer players feted by autocratic leaders and managers appointed by their regimes, remained largely on the sidelines of mass anti-government protests. At the heart of their failure to join the popular revolts sweeping the Middle East and North Africa, is what Palestinian-American historian Hisham Sharabi called ‘neo-patriarchy’ in a controversial 1992 book that is still banned in many Arab countries.

Sharabi argued that Arab society was built around the dominance of the Father (patriarch), the center around which the national as well as the natural family are organized. Between ruler and ruled, between father and child, there exist only vertical relations: in both settings the paternal will is absolute, mediated in both society and the family by a forced consensus based on ritual and coercion.

In other words, according to Sharabi’s thesis, Arab regimes franchised repression so that in a cultural patrimonial society, the oppressed participated in their repression and denial of rights. The regime is in effect the father of all fathers at the top of the pyramid. As a result, the patriarchal values that dominate soccer in addition to its popularity made it the perfect game for neo-patriarchs. Their values were soccer's values: assertion of male superiority in most aspects of life, control or harnessing of female lust, and a belief in a masculine God. The identification of the presidents of Egypt, Iran and Yemen – Hosni Mubarak, Mahmoud Ahmadinejad and Abdullah Ali Saleh – as well as Libyan leader Colonel Muammar Qaddafi’s son, Al Saadi, with their country’s national teams, turned their successes and failures into barometers of how their regimes were faring. They also turned celebrated soccer players and managers into regime supporters who saw the autocrat as their father figure.

In Syria, that was all the more the case with the domination of soccer by the military and the police. The Syrian military and police own and operate two of the country’s most important teams; Al Jaish (the Army) was for the longest time virtually synonymous with the national team. National service was crucial to Al Jaish’s success. The moment a talented young player came of age, the army conscripted him and he played for Al Jaish. By absorbing the league's talent they won honours and attracted huge crowds, while the other clubs had to keep a lid on their discontent. Professionalization has hit Al Jaish hard. Yet, its soccer training grounds are still designated as military zones, its chairman is a general, and its technical director a colonel.

Similarly, a senior military officer, General Mowaffak Joumaa, heads the Syrian Olympic Committee. Joumaa underlined the importance the Assad regime attributes to its association with sports by recently insisting that he was committed and determined to head the Syrian delegation to this summer’s London Olympics, irrespective of calls for a banning of Syria. “There is no question about it, we are taking part in an official way and with the best quality of athletes here in Syria,” Joumaa said. The International Olympic Committee (IOC), despite mounting British opposition, insisted in March that Syria would be at the Games despite the brutal government crackdown on protesters.

By joining the revolt, Saroot and Balhous have become part of a small group of soccer players and officials in countries in the Middle East and North Africa facing popular uprisings. Libyan national team players waited four months after the eruption of protests against Qaddafi and joined only after their relatives and friends were killed by pro-government forces. In Bahrain, players joined because as Shiite Muslims they resented discrimination by a Sunni majority regime. Elsewhere in Algeria, Egypt, Yemen, Morocco, Tunisia, and Syria, players and managers remained aloof.

Saroot describes his role as "a big responsibility to lift people's morale. We always try to stay optimistic about the future. The more optimistic we are, the more the revolution keeps going: it’s worth it. I'm free. I've travelled all over the world to play football. But freedom is not just about me or about travelling. What about everyone else? Freedom is a big word. It's about freedom of speech and freedom of opinion. If you see something wrong being done, freedom is being able to talk about it.”

Speaking in the same broadcast as Joumaa, Saroot asserted that he knew personally that a majority of athletes slated to represent Syria in London were doing so to shield their family from the repercussions of defection. "They don't want to play for a flag that they have no pride or faith in, he said.

In a column last year in the London-based Arabic daily Al Quds al Arabi, writer Elias Khoury describes a documentary entitled Al Waar (Rocky Terrain) by an anonymous Syrian filmmaker that portrays Saroot as a leader of the protests and a composer of some of its slogans and songs. “His features are Bedouin; he is a thirsty person who is not satisfied with only freedom. It is he who composes for the nocturnal gatherings for a popular festival in the suburbs of Homs where the air bears bullets. The slogans are an appeal by a decapitated nation and the will of a people determined not to bow to anyone”, Khoury writes.

The film quotes the chants of the protesters crafted by Saroot: "Go! is the cry of the brave, A cry of the city with Bedouins, A cry of all religions, The cry of Syria and the land it covers: Let them leave him and his dogs and the destruction they have wrought”. Khoury describes Saroot as the protagonist of the film whose voice challenges the Assad forces weaponry. “Our weapon is our voice,” Saroot says in the film.

Throughout the film, a picture of Bashar al-Assad superimposed on that of his father, Hafez al-Assad, constitutes the background. The words, “Assad or nothing”’ are a play on the slogan that accompanied the portrait of Hafez during his rule: Our leader in eternity and beyond.