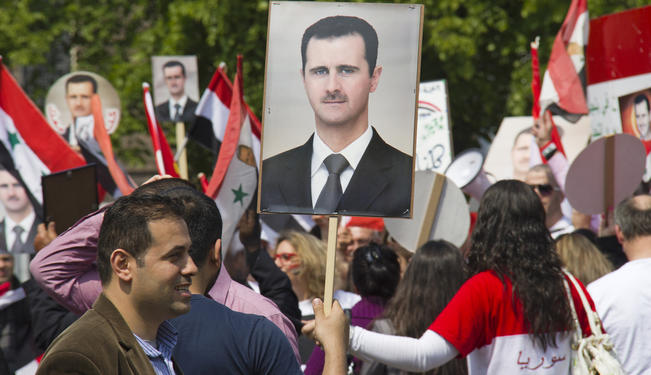 Carl Anthony Wege, a renowned expert on the Levant region, decodes the complex sectarian dynamics behind the conflict in Syria and argues that the Syrian linchpin in the Shia crescent has vanished.

That unstable admixture exploded with the boiling ambition of both secular revolutionaries and Sunni Islamists into civil war, as the Arab Spring rolled across Syria. Sectarian identities long thought subsumed into the Ba’athist state, re-emerged in sharp relief. Syria’s carefully built mukhabarat state disintegrated, exposing a sectarian demography every bit as complex as that in Iraq or Lebanon. Syria’s Christian, Druze, and Kurdish communities have splintered with some factions supporting Assad and others intent on avoiding confrontation while pursuing their own political agendas. The Druze in southern Syria’s Jabal Druze Mountains, for example, appear to have already entered into an accommodation with the anti-Assad Sunni fighters dominating that region near Jordan.

Syria’s complex demography encompasses a generally pro-Assad geographic archipelago incorporating the country’s Alawite, Shia and Ismaili communities. When Assad’s secular Ba’athists ruled all of Syria, they discouraged even Alawite sectarian identification — although distinct Alawite tribal populations were recognizable. The official Alawites included the Kalbiyya, the Khaiyatin, the Haddadin, and the Matawirah tribes. As Syria fell into civil war, the fractures within the Alawite community became visible. Assad’s own Kalbiyya tribe has remained comparatively more loyal to the regime, while the Alawite Khaiyatin became relatively less supportive.

The geographic focus of the Alawi population is in the coastal Latakia Governorate and includes the cities of Latakia and Tartus, as well as the roughly 100 villages and towns in the Jabal Nusayriyah. The Syrian Shia communities mirror those in Lebanon prior to the 1975 Civil War. They have been disadvantaged socially, educationally, and economically. Despite their alliance with Iran, the Assad dynasty had never encouraged development of Syria’s Shia population. Most of Syria’s Twelver Shia live in villages between Homs and Aleppo; they are an important minority in the Hama Governorate. Significant numbers of Shia living in Syria are refugees from the last generation’s wars in Iraq and Iran, and are now settled primarily in Damascus. The expatriate Iraqi Shia are mainly located in the vicinity of the Sayyida Zaynab Shrine in South Damascus where the daughter of Imam Ali is entombed, while the Syrian Shia of Iranian origin are established near the Damascus Small Gate Shrine of Sayyida Sukayna. The Syrian Nizari Ismaili community, sometimes called Sevener Shia to distinguish them from Iran’s dominant Twelver Shia, are found mostly in the south of Salamiyah in the Hama Governorate. There are smaller communities of Ismaili living west of Hama and in Latakia, along with Latakia’s Alawite and Sunni population.

The sectarian character of these cantons has been accentuated by internal migration and population displacement as a result of the ongoing fighting across Syria. That fighting, combined with the associated implosion of Assad’s popular support, presented Iran with a dilemma. The Shia Jabhat al-Muqawama (resistance axis), sired by Iran over the last generation, would be shattered by a successful Salafist-dominated Sunni revolution in Syria.

For Tehran, such an outcome is a direct threat to Iran’s vital national interests to be avoided at all costs. Iranian intervention to prevent such an outcome in Syria has proceeded in several stages. Initially, Iran supported the Assad regime with advice. Iranian advice was based on their experience defeating the widespread but unarmed Green Movement rebellion following Iran’s disputed 2009 elections. That advice did not, in this instance, prove particularly effective. Secondarily, Iran utilized its Revolutionary Guard under Qassem Suleimani to coordinate intervention by Lebanon’s Hezbollah and Iraqi Shia fighters to forestall a Sunni triumph in the civil war. The Hezbollah and Iraqi Shia fighters appear intended to slow down and harass the anti-Assad forces; this way buying time to prevent a clear cut victory for the Syrian regime’s opponents.

To that end, Lebanon’s Hezbollah deployed fighters, often directly engaging the Salafist Jabhat al-Nursa, in an arc running from about Zebdani to al-Qusayr and Masharih al-Qaa to Dabla in the suburbs of the western city of Homs. Al-Qusayr in western Syria, which contains a number of families from Hezbollah’s foundational Hammadi clan, is one of the more critical places near Homs — serving as a link between Shia areas of the Bekka and Alawite dominated Jabal Nusayriyah. Hezbollah operations aim to focus on the Shia villages in the rural area of al-Qusayr, with the intent to control the Orontes River Basin and thereby provide Assad’s forces with a locus of control from Damascus into Homs and Tartus in Syria's Alawite regions. Hezbollah is likewise providing some cross-border fire support to pro-Assad forces operating in An Nabk and fighting in the area between the northern Bekka and Homs and into the Salamiyah area east of Hamah, as well as the Rif-Dimashq Governates and Damascus.

Iraq’s role in the Syrian revolution has been somewhat schizophrenic. Iraqi Sunnis support the anti-Assad forces while Iraq’s Shia-dominated government supports the Assad government. Anti-Assad Sunni Iraqis are facilitating the movement of Salafi Iraqi fighters across the Jazirah Iraqi-Syrian Desert in support of the Syrian revolution. Official Iraqi support of Syria’s Bashar al-Assad is based on the emerging Iraqi alliance with Iran.

Prime Minister Nouri al-Maliki’s Baghdad government has supported Assad primarily through the movement of Iraqi Shia fighters into Syria and in maintaining the air bridge from Tehran, supplying arms and equipment to Damascus and supporting the new Iranian-funded military center at Latakia airport. The Latakia facility may prove important to Iran if the conflict drags on and Tehran needs a way to both provide an overland arms supply route to Hezbollah and sustain Syria’s Alawites. Iraqi Shia fighters, including volunteers from Qais al-Khazali’s Asaib Ahl al-Haq, are moving into Syria through the Sheibani network; fighters calling themselves the Abu Fadl al-Abbas Brigade, part of Iraq’s larger Kata’ib Hezbollah, are deployed in the greater Iraqi expatriate community in Sayyida Zaynab of south Damascus.

While Hezbollah and the Iraqi Shia fighters buy time for Assad, Iran’s Quds and the regular Revolutionary Guard are trying to change the dynamic of the conflict. The guard is attempting to organize a confederation of Basij-style militias tied to the archipelago of pro-Assad ethnic and sectarian cantons to fight the insurgency under a nationalist umbrella.

There are basically two major pro-Assad militias operational across Syria. The first and older of the two is the Shabiha, or ghost militia, derived from the 1980s' Latakia region mafia style criminal gangs. It is less disciplined, its geographic reach is more truncated, and it is of smaller significance. The second is the Jaysh al-Sha’bi (People’s Army) derived in part from Assad’s Popular Committees and trained by Iran’s Revolutionary Guard and Hezbollah. This is the more relevant organization. Their training is minimal but the number of fighters is greater than in the Shabiha, and some of their training apparently occurs in Iran. In Iran, Jaysh al-Sha’bi recruits are given a two week training course in urban warfare — probably at the Imam Ali Garrison in east Tehran — before going to the frontline, back in Syria. Whether the Jaysh al-Sha’bi can do anything more than delay the inevitable, is problematic.

Syria’s Civil War is now settling into a bloody stalemate which may be the best Tehran can hope for. Iran would prefer a strong Alawite-dominated Syrian state. Without a clear Assad victory, however, Iran may be forced to settle for a militia confederation of allied sectarian militias intended to harass any post-Assad Sunni government. Syria’s Salafist rebels have shouldered the bulk of the fighting and are coming to dominate the anti-Assad forces, but have no experience governing a modern state. Iran may seek to exploit that weakness by making a post-Assad Syria ungovernable.

Yet, irrespective of the eventualities, neither Assad, nor Iran can ever return Syria to its pre-revolutionary state. Syria itself is a wreck; its economy in shambles, and its major towns and cities piled high with the rubble of war. The Syrian linchpin in the Shia crescent is no more.