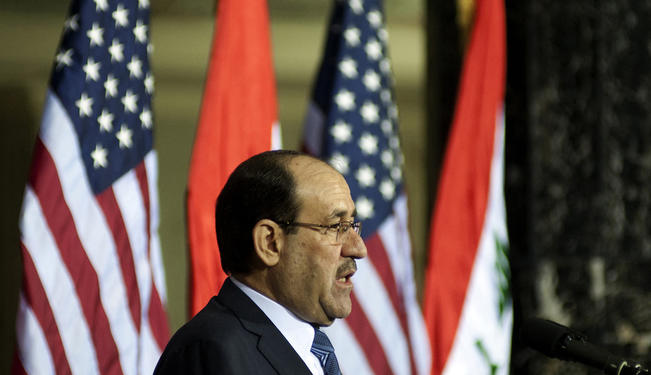 Tensions are rising in Iraq, as new waves of violence rock the country following hotly-contested elections and months of protests by its Sunni minority.

It has been a bloody few weeks for Iraq. Following months of escalating protests in Sunni-dominated areas of the country, a series of highly coordinated bombings have rocked Iraq. The unrest has worsened with additional turmoil, as at least 218 people have been killed in gun battles that began when security forces attempted to clear an encampment in northern Iraq. Analysts fear that this violence, the most significant since the December 2011 US withdrawal, risks dragging Iraq back into civil war. It is difficult to discount these fears given still fresh memories of previous sectarian violence and a seemingly endless conflict in neighboring Syria. However, while these are real risks, there are also other possibilities.

It is clear: Prime Minister Nouri al-Maliki is not popular, neither is the current election process. Elections were held on April 20 in twelve of eighteen provinces. Low turnout seems to have been widespread. Iraq's Independent High Electoral Commission (IHEC) found that turnout collapsed to 50%, a stark contrast to the 72% of eligible voters that participated in the 2009 elections. Civil organizations appear to have even lower estimates.

The assassination of fourteen Sunni candidates most certainly had an effect on lowering voter turnout among Sunnis. However, the turnout was actually highest in Saladin province, which has a significant Sunni population — though it was much lower in Sunni-heavy Diyala with 51%.

Given this gap, the assassinations are only part of the story, especially since turnout was actually lower in Sh'ia-dominated provinces. IHEC figures state that turnout was only 59% in Muthanna, 58% in Diwaniyah, 54% in Karbala as well as Babylon, 53% in Najaf, 50% in Dhi Qar, 44% in Missan, and 42% in Basra.

The fact that Maliki's expanded State of Law Coalition has lost eleven seats in its heartland, while votes for the oppositional Muwatin Coalition have surged, is indication enough that the Iraqi prime minister is losing ground. However, when taking into account that voter turnouts have been decreasing across the country in each successive election, one can identify a beleagured electorate that is losing faith in a democratic system which is perceived as corrupt, ineffective, and increasingly sectarian.

The protests by Iraqi Sunnis who allege their exclusion are thus even more dangerous. They constitute a threat to both Maliki's rule and the US-brokered liberal republican system on which it is based. Accusations of Maliki acting in a sectarian fashion could spread to major cities such as Baghdad, which had an abysmal voter turnout of 33%. Baghdad and other urban centers host large populations of cosmopolitan Iraqis who are alienated by sectarian divides, and would prefer that Muslim sects worked together.

Policy decisions appear to reflect state paranoia: In addition to crackdowns on protest encampments, major media outlets such as Al-Jazeera have had their licenses cancelled; the only border crossing with Jordan was closed at the end of April; and six provinces delayed their elections due to the insurgency and protests. The Iraqi government is taking the position that they are one and the same.

The specter of civil war has been made more potent by the ongoing violence in neighboring Syria, which is plagued by scenes of carnage witnessed in Iraqi cities several years earlier. Maliki has gone so far to issue a warning on May 1 to “those who want to take the country back to sectarian civil war,” stating that the surge of violence “came back to Iraq because it began in another place in this region,” clearly referring to Syria. However, the Syrian Civil War was not inevitable. It was the result of a sitting government choosing brutal violence over democratization. The latter can still happen in Iraq, despite the government's current determination to dismiss legitimate concerns among its citizenry as a movement of former Ba'athists and Salafi terrorists that legitimizes violent crackdowns. Nevertheless, democratization may take a form unlike that exported to the country by the United States.

Protestors in Anbar, many of whom disavow the violence of Salafi terrorist groups, have concerns that desperately need to be addressed by Iraq’s political system. With Saddam Hussein having ruled Iraq as a Sunni dictator, it does not change the fact that major issues like poverty and development afflict members of his Sunni ethnic group. Although Sunnis had privileges in Iraq's political and military structures, Saddam Hussein transformed Ba'athist Iraq into a personal fiefdom where only small circles of elites were truly privileged. In rural provinces such as Anbar, these benefits were hardly felt at all, and the situation was worsened during the period of sanctions against Iraq and the US-led occupation.

Sunnis also ended up being unfairly targeted by Paul Bremer's policies as the head of the Coalition Provisional Authority. These ranged from disbanding the Iraqi military to banning employment for members of the Sunni-dominated Ba'ath Party that many solely joined as a career move under Saddam Hussein’s rule. The Iraqi parliament has allowed for the ascendancy of a new and apathetic political elite (including Sunnis, which is why both protestors and militants dislike them) — the major parties are all avowedly Sh'ia — and the constitution itself was rushed through by a US occupational authority that wanted to leave the country as soon as possible. These are just a few examples of the wide-ranging institutional problems that Iraq faces.

The issue is that some of this is unavoidable in the political and economic system that currently exists in Iraq. Republican democracy is not likely to work under conditions of scarcity. The scarcity in Iraq has the unfortunate effect of leading individuals to regard each other with suspicion. This is in addition to the fact that ties of ethnic loyalty are increasingly seen as more dependable. These more ancestral bonds are given a sleek veneer due to a variety of factors, from a lack of confidence in supranational organization to a cultural emphasis on authenticity in reaction to the implementation of neoliberalism in Iraq. Additionally, Saddam Hussein deliberately flamed sectarian divisions to give himself legitimacy as a stabilizing force.

The result has been that Iraq's diverse minority groups are plagued with deep suspicions of one another which led to political identifications along sectarian lines — especially among Iraq’s Sh'ia and Kurdish populations. Political and ethnic identifications have become the same, as this is seen as the best method for securing a minority group's access to state resources in a liberal republican democracy.

Due to democratic structures being a contest for state resources in conditions of scarcity, the result is that Iraqi liberal republicanism has become an ideology of minority competition for these resources. Class inequalities also mean that a minority group's tapping into state resources is distributed unevenly, with the majority of wealth being consumed by elites, and further drainage in government corruption. Iraqi democracy has become biased towards a Sh'ia-dominated elite which capitalizes on its access to resources. The grievances of Iraqi Sunnis arise organically because political disenfranchisement has been fused with ethnic marginalization. Sectarian conflict has become inevitable, as has a rejection of the elite-dominated structures themselves.

If we are to avoid civil war, ethnic cleansing, and genocide, then we must understand the factors behind the rejection of Iraqi liberal republicanism itself.

Sunni protesters in Anbar have rejected existing political structures for the same reason that voter turnout is so low: confidence is waning in the existing Iraqi parliamentary system to deliver on issues of social change. It seems that Iraq's democratic system requires an overhaul that allows it to become genuinely participatory. Given the renewed activist energies that have rocked the region over the past few years, mass mobilization for these changes is possible. However, the continued implementation of anti-terrorism laws that disproportionately target Sunni Iraqis, means that pushes for democratic expansion will have to continue to overcome the accusation of infiltration by Ba'athists and veteran insurgents.

Regardless, any type of representative democracy can only work in Iraq if the conditions of scarcity are ideally eradicated or at least minimized. This cannot be achieved without first overhauling Iraq's economic policies and reviving the Ba'athist ideas which did make sense, and articulating them in a fresh way. For instance, the Iraqi education system once benefited from generous state subsidies until a decline which began with the Iran-Iraq war and worsened significantly after the occupation. The dictatorial consumption, disproportionate investment in warfare, and schemes of privatization — which made this decline possible — are all surmountable challenges.

However, there must be a willingness to challenge established elites and economic structures of privatization imported by the Coalition Provisional Authority, especially in the oil sector. This includes the patronage politics and vicious police state that are still toxic parts of the Iraqi political process. It seems clear that the main driving agent for these power shifts must be some sort of an Iraqi Spring, of which the protests in Anbar are only a forecast. Otherwise, a loss of faith in Iraqi democratic structures may mean support for an assault on those structures themselves.