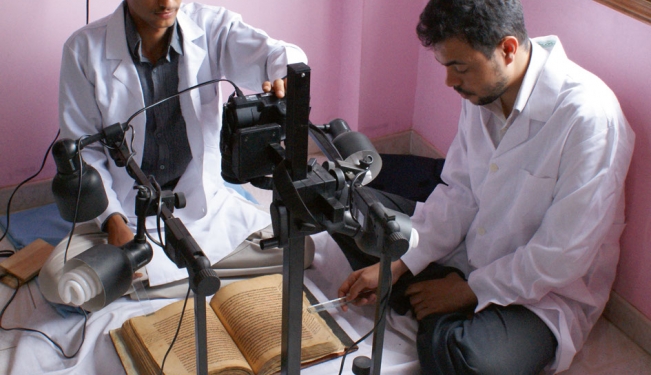 Sabine Schmidtke and Jan Thiele provide a history of the manuscripts from the little known Zaydi tradition of Yemen. Centuries old, these contain invaluable information about Islamic thought and exhaustive efforts to preserve the manuscripts are underway.

The size of the manuscript holdings of the many public and private libraries of Yemen makes it one of the most important collections in the world. Estimated at 50,000 manuscripts, the holdings of these libraries rival those of the National Library of Egypt or the Süleymaniye Library of Istanbul. Equally intriguing is the character of these libraries’ collections – a product of Yemen’s unique geography and history – and the nature of its scholarly communities.

From as early as the 9th century, traditional scholars in Yemen’s inaccessible northern mountainous highlands, particularly in the Zaydī communities, developed lines of intellectual inquiry which had fallen into abeyance in other regions of the Islamic lands. Mostly due to their isolation, these communities preserved extremely ancient materials. Yemen’s southern and central regions, by contrast, were predominantly inhabited by other religious strands that were subjected over the centuries to different rulers and preserved a very different kind of religious tradition.

While economic hardship and social and political instability put these collections at risk for the past five decades, a new threat has appeared in recent years that makes attention to these collections imperative. Since many of these libraries are preserved by families belonging to the Zaydī branch of Islam, Salafī extremists ideologically opposed to Shīʿism have targeted these collections for destruction.

The preservation, dissemination and study particularly of the mostly unknown Zaydī literature that is preserved in Yemen will grant access to sources that were not maintained elsewhere and underscore the fact that a rationalist epistemology continued in Islamic thought for a longer period than is generally recognized. It will thus have an immediate impact on the reform agenda of Muslims today.

The Zaydī community is a branch of Shīʿī Islam and has survived mainly in the modern state of Yemen. The community’s historical roots can be traced back to the 8th century, when the Zaydiyya separated from other Shīʿī groups by recognizing the prophet Muḥammad’s great-great-grandson Zayd b. ʿAlī (d. 740) as the fifth Imām.

During its formative phase the community was located in Kufa in Iraq. In the 9th century, Zaydī activity shifted to Northern Iran. A first Zaydī state was established in 864 in the southern coastal region of the Caspian Sea, where Zaydī scholarship flourished until the early 13th century. Al-Hādī ilā l-Ḥaqq (d. 911) founded a second Zaydī Imamate in the northern mountainous highlands of Yemen. Retrospectively, his legacy turned out to be the beginning of a long-lasting process in Zaydī scholarship: al-Hādī’s teachings testify to the first impacts of Muʿtazilism – the earliest school of rational theology within Islam – on Zaydī thought. In specific theological questions, his thought shows a particular inclination to the teachings of the Baghdadi school of the Muʿtazila.

Soon after al-Hādī’s death, the theological mainstream in both Zaydī states developed in different directions. The Caspian region became the leading center of Basran Muʿtazilism and attracted eminent scholars such as ʿAbd al-Jabbār al-Hamadhānī (d. 1024), who became chief judge of the city of Rayy. In Yemen, al-Hādī’s thought was systematized by the Muṭarrifiyya, a pietistic movement that had emerged in the 11th century and whose adherents developed a very specific natural philosophy.

As a result of the unification of the Zaydīs in Iran and Yemen during the 12th century, a massive transfer of knowledge from Iran to Yemen began that steadily increased until the death of the Imam al-Manṣūr bi-llāh in 1217. This led on the one hand to a cultural revival as a result of which the cultural center of Zaydī Muʿtazilism gradually shifted from the coastal regions south of the Caspian Sea to Yemen and on the other to a renewed blossoming of Muʿtazilite theology. Had it not been for the massive transfer of Zaydī religious literature from Iran to Yemen, most of the Iranian Zaydī and Muʿtazilī literary heritage would have been lost. Many of the texts have survived in Yemeni collections as unique manuscripts.

The new ideas and manuscripts stimulated the emergence of a Yemeni school tradition committed to Basran Muʿtazilism. Its rise among scholars of the 12th–13th century was, however, accompanied by internal critique. Some scholars began propagating a restoration of a Zaydī “orthodoxy” rejecting any Muʿtazilī influence as inauthentic.

As a result of the geographical isolation of Yemen, the scholarly exploration of its political and intellectual history started later than was the case with most other parts of the Islamic world. In 1763, a German-Danish scientific expedition arrived in Yemen, among them Carsten Niebuhr (1733–1815) who later on published his observations in hisReisebeschreibung nach Arabien und andern umliegenden Ländern.

The beginning of the exploration of the manuscript holdings of the public and private libraries of Yemen dates back to the last decade of the 19th century. Its primary textual foundation was the collection of manuscripts that had been brought together by Eduard Glaser (1855–1908) during his repeated journeys to Yemen. Glaser sold the manuscripts collected during his journeys to the Königliche Bibliothek zu Berlin (nowadays Staatsbibliothek zu Berlin), the British Museum and the Austrian National Library. The Italian merchant Giuseppe Caprotti had assembled over 34 years a collection of some 1,600 codices that were sold in 1909 to the Ambrosiana Library in Milan. Five years later, 180 additional Yemenite manuscripts were donated to the Ambrosiana. With a total of 1,792 codices, the Ambrosiana library thus houses the largest and most significant collection of Yemenite manuscripts in Europe. In Yemen, the holdings of the former library of al-Manṣūr bi-llāh were transferred in 1929 to the Great Mosque of Ṣanʿāʾ, where they continue to be housed.

On the basis of the European collections of Yemeni manuscripts, a number of Western scholars initiated the scholarly investigation of Zaydism during the early decades of the 20th century. During the middle of the 20th century, Egyptian scholars developed an enhanced awareness of the rich and yet unexploited manuscript holdings of Yemen’s public and private libraries. In 1951, Egyptian scholars set out on an expedition to Yemen and spent three months there, cataloguing and filming some 300 manuscripts. The significance and impact of this expedition cannot be overestimated. Among other precious manuscripts, its members had filmed most of the Muʿtazilī works that had been copied during the 12th century for the library of al-Manṣūr. Most of these texts were edited over the next decade and beyond, and these editions prompted a rise in Muʿtazilī studies among scholars in the West and the Islamic world.

The true founder of Zaydī studies is Wilferd Madelung. He was also the first Western scholar who was able to profit from the Yemeni manuscript collections in Europe, in Egypt and, most importantly, in Yemen itself. Over the decades, Madelung added numerous invaluable editions and studies devoted to the intellectual history and historiography of medieval Zaydism in Yemen and Iran. Each one broke new ground and most were translated into Arabic.

Since the 1970s, numerous scholars, particularly from Yemen, significantly contributed to advance our knowledge of the intellectual history of Zaydism in Yemen. Increasingly, the vast holdings of the mostly unexplored private libraries in Ṣaʿda, Ṣanʿāʾ and other historical centres of Zaydism in Yemen were catalogued and partly digitized. During the 1970s and 1980s, the German Foreign Ministry funded a large-scale project to train Yemenis in the conservation of manuscripts, specifically in view of the precious early Qurʾān fragments that were discovered in 1972 during renovations of the roof of the Great Mosque in Ṣanʿāʾ. During the 1980s, Iranian scholars and institutions were active for several years in cataloguing and digitizing Yemenī Zaydī manuscripts. In 2000, the French Centre for Archeology and Social Sciences in Ṣanʿāʾ launched a program to safeguard the estimated 3,500 manuscripts in Zabid by cataloguing, digitizing, and physically restoring the manuscripts.

Major contributions to the scientific exploration of the Muʿtazilī manuscripts in the public and private libraries of Yemen were made by the members of the international “Muʿtazilite Manuscripts Project Group” that was founded in 2003. Funded by a variety of foundations, the project has held three international workshops in Istanbul and published more than fifteen critical editions and facsimiles mostly on the basis of Yemeni manuscripts, along with numerous monographs and edited volumes.

Since the very beginning of the activities of the “Muʿtazilite Manuscripts Project Group”, its members have established close contacts with the various cultural institutions in Yemen, obtained numerous digitized manuscripts through them and repeatedly visited the library of the Great Mosque in Ṣanʿāʾ and photographed some of the most significant Muʿtazilite manuscripts of the library. The efforts of the “Muʿtazilite Manuscripts Project Group” have been merged since 2008 with the Research Project “Rediscovering Theological Rationalism in the Medieval World of Islam”, which is funded by the European Research Council and hosted by Freie Universität Berlin.

In 2009, the German Foreign Office in cooperation with Freie Universität Berlin launched “The Yemen Manuscript Digitization Project” with the ultimate aim of digitizing the holdings of most so far unexplored private libraries in Ṣanʿāʾ and its vicinity over the next five years. In addition to this, the “Yemen Manuscript Digitization Initiative” (YMDI) was launched in 2010, a collective of research librarians and leading scholars of classical Islam, Middle Eastern history, and Arabic Literature under the direction of David Hollenberg (University of Oregon). Its mission is to preserve the Arabic manuscripts in the private libraries of Yemen. YMDI’s partner institutions, Princeton University Library and Freie Universität Berlin, received an NEH/DFG Enriching Digital Collections grant. Technicians from Yemen are currently digitizing the codices of three private libraries. These digital images will be uploaded to the Princeton University Digital Library, and made freely available on the World Wide Web. The results of these digitization projects will hopefully encourage more scholars to enter the field of Zaydī studies.