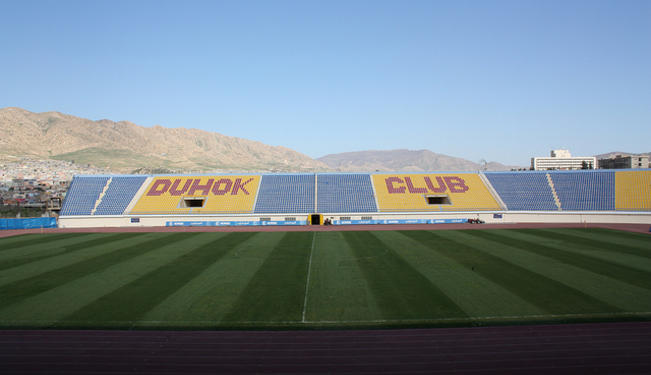 Kurdistan beat Northern Cyprus last month to win the 5th VIVA world cup but both nations secured a far greater victory than emerging at the top of an obscure soccer tournament designed for often even more obscure national, ethnic and cultural entities.

In competing in the world cup for nations that world soccer body FIFA refuses to recognize, Kurdistan and Northern Cyprus – alongside the Tamils, Western Sahara, Darfur, Provence, the former Roman province of Raetia, Zanzibar, and Occitania, a strip of France, Italy and Spain where Occitan is spoken – projected themselves as national and cultural entities.

The tournament organized by the New Federation or Non-FIFA Board underlines the role soccer plays in furthering national dreams. Like religion, soccer is a tool for socialization that generates a sense of belonging, representation and recognition. For nations like Palestine, that thanks to Arab pressure is FIFA’s only member without a state, and Iraqi Kurdistan, an autonomous part of Iraq, soccer is a key pillar of their strategy to achieve independence.

A statement by Iraqi Kurdish president Massoud Barzani, equating sports to politics as a way of achieving recognition, adorns the Kurdish state-in-waiting’s three major stadiums and virtually all of its sports centers and institutions. “We want to serve our nation and use sports to get everything for our nation. We all believe in what the president said,” said Safin Kanabi, head of the Kurdish Football Association, which co-organized the VIVA tournament with financial support of the Iraqi Kurdish government, and scion of a legendary supporter of soccer who led anti-regime protests in Kurdish stadiums during Saddam Hussein’s rule.

Sitting on the floor of a hotel room in the Kurdish capital of Erbil, Sheikh Sidi Tigani, president of the Western Sahara Football Federation said the Sahrawi government-in-exile formed by liberation movement Frente Polisario saw soccer as a way of keeping youth away from violence and drugs. It also allows the guerrilla movement to channel discontent with the fact that 37 years after the territory was occupied by Morocco, Saharans are no closer to a state of their own.

“Our external objective is primarily to project our identity through sports. Many people don't know our problem or would not be able to find us on a map. Soccer can change that. We had a French woman visit our refugee camps. When she told children that she was from France, they all replied saying Zidan” – a reference to retired star soccer player Zinedine Zidan, a Frenchman of Algerian origin, Sheikh Sidi said. “We’ve replace the gun with a soccer ball,” adds West Saharan national sports director Mohammed Bougleida.

Western Sahara’s presence at the Kurdistan tournament constituted a victory not only for the African desert region but also for Kurdistan itself, even if the Sahrawis were forced to make concessions. It allowed Kurdistan to demonstrate its ability and intention to conduct a foreign policy at odds with that of Baghdad by hosting a World Cup for nations that world soccer body FIFA refuses to recognize. The fact that Morocco protested against the inclusion of the disputed Saharan territory to the Kurdish department of foreign relations rather than the Iraqi foreign ministry, and negotiated a deal with the Kurds under which the Saharans were not allowed to fly their flag during ceremonies and matches added to Kurdistan’s sense of recognition.

For the various nations participating in the VIVA World Cup, recognition means differing things. For a majority including Kurdistan, Northern Cyprus, Darfur, Western Sahara and the Tamils it is about achieving recognized nationhood. For Raetia and Occitania it is a platform to assert cultural identity while for Zanzibar it’s a tool to persuade FIFA to pressure the Tanzanian football association to include the island as part of its responsibility.

Building and maintaining an Iraqi Kurdish national team remains a political balancing act. Recruitment of Diaspora players is sensitive. Turkish Kurds are off limits. A nation whose Kurdish players and coach helped it in recent years reach the semi-finals of both the World Cup and the European Championships, Turkey fears losing some of its best players and encouraging national aspirations among its estimated 15 million Kurds who account for one fifth of the population.

“When we travel through Turkey we can't wear our Kurdistan outfits because it is too sensitive. The Turks remove all our T-shirts and tags from our bags. It's just too risky," said Mr. Kanabi.  Iraq too is afraid that the Kurdish team will lure some of its best players. Lack of FIFA recognition means Mr. Kanabi cannot demand that Iraqi Kurds choose between the Iraqi and the Kurdish squad.

In using soccer as a tool to further nation and statehood, Palestinians and Kurds are maintaining a tradition established at the time that soccer was introduced in the region by the British. “Sport was then used as a means of resisting, to different degrees, to French and British colonial presence, and of defending the Arab cause in the international arena,” writes Algerian sports researcher Mahfoud Amara in a book published last year.

Algeria’s national team, for example, traces its roots to the National Liberation Front (FLN) during the war of independence which formed the team in 1957 from Algerian players in France who clandestinely left their colonial motherland to forge closer ties with its socialist supporters. The FLN move came on the heels of the first sport demonstration involving several Arab nations during the 1956 Olympic Games in Melbourne, which Egypt, Lebanon and Iraq boycotted in protest against the invasion of Egypt by British, French and Israeli troops.

The crowds in Kurdish stadiums stood erect each time the Kurdish anthem was played at the beginning of a VIVA match. “Kurdistan, Kurdistan,” they shouted with one voice whenever their national team went of the offensive.

Says Mr. Kanabi: “Our success with VIVA demonstrates our ability to govern ourselves. Our goal for now is to be part of FIFA. All languages are represented in FIFA, only Kurdish isn’t while (FIFA president Sepp) Blatter claims that football is for everyone. We are human. We want the world to understand Kurdistan’s contribution.”