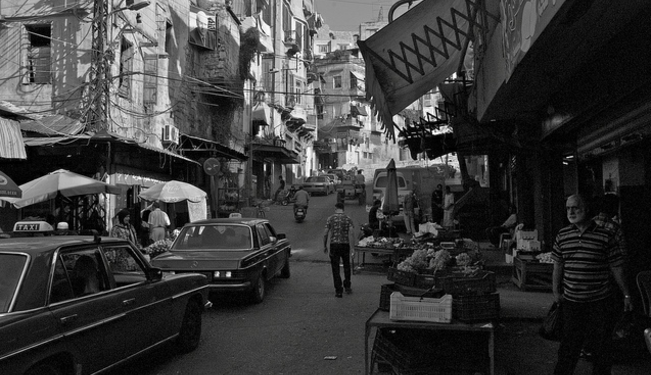 This article is part 2 of a multi-part series exploring Tripoli, Lebanon. The series is based on Nicholas A. Heras’ extensive experiences in the city between 2006 and 2011, and the continuing lessons its residents have given him. This is the second of seven parts.

Politicized sectarian violence again returned to Tripoli’s beleaguered northern neighborhoods of Bab Al-Tabbaneh and Jebel Mohsen over the weekend of June 2-3. The combat between Sunni Muslim fighters in Bab Al-Tabbaneh and Alawite fighters in Jebel Mohsen has left 14 people dead and over 50 wounded. This most recent fighting is just the latest chapter in the conflict between the two neighborhoods. Fighting between the two sides in May left 11 people dead and over 100 wounded. As a result of the violence, the Lebanese Army has increased its already significant presence along Syria Street, the front-line thoroughfare that divides Bab Al-Tabbaneh from Jebel Mohsen. The streets of Tripoli, usually vibrant and crowded with traffic, are reported empty as the population of the city watches and waits for a sign that the feuding combatants can be convinced to lay down their arms.

As Lebanon’s second largest city, Tripoli is often portrayed as a quaint northern cousin of Beirut, forever in the shadow of Lebanon’s capital and serving the role of a “precious” living museum of what urban life in Lebanon once was. In spite of these stereotypes, Tripoli is an important commercial and cultural center in the country, drawing tens of thousands of people to it daily for work, play, and a sense of communal belonging.

Tripoli, which is the official capital of the North Lebanon Province, is also the most important city in the geographical region of northern Lebanon. This geographical area extends northward along the coast and inland into the fertile, rural Akkar region that borders Syria to the north and east. It follows to the hill villages directly north and east of the city, and onward to the plunging gorges and breath-taking mountains of the Mount Lebanon range that sweep down towards the eastern Beka’a Valley. It also extends along the coastal road leading southbound to Beirut as far as Batroun, which is a hopping beach resort town that is well-known for its boisterous nightlife. Tripoli represents the area of greatest economic activity in this region, serving both as a port of entry for shipping and as the predominate market town for the villages of the Akkar. It is also the most important transportation hub linking these diverse communities with Beirut and the Syrian cities of Tartus to the northwest and Homs and Hama to the far northeast.

The geographical area where Tripoli predominates is diverse both in its scenery and in its people. Sunni Muslim and Christian villages neighbor each other and are spread across the region around Tripoli and in the Akkar. The area represents the historical stronghold of the Maronite Christian population in Lebanon throughout the Mount Lebanon range. Greek Orthodox Christians hold several important sites of religious learning in the northeastern hill suburbs, particularly in the large village of Koura and its allied municipalities. Tripoli is itself the most important center of Sunni Muslim cultural and religious life in Lebanon, with a vibrant Christian community that includes Maronite Catholics, Greek Orthodox, and Armenians. The Alawite area of Jebel Mohsen, a northern neighborhood of Tripoli set upon a hill and surrounded on all sides by Sunni Muslim neighborhoods, is the most important concentration of Alawites in all of Lebanon.

Historically, Tripoli has been a prized port city fought over by numerous empires in the Mediterranean region, with its most prosperous periods of cultural and economic flowering under the Egyptian Mameluke dynasty from the 13th-15th centuries, and under the Ottomans in the late 19th century. The Mameluke era in Tripoli gifted the city with most of its most famous historical and cultural attractions. This includes its soap-making markets and the Taynal Mosque, a beautiful, multiple-green domed, marble constructed house of worship that is as physically striking as it is a source of pride and distinction for the city’s Sunni Muslim community.

The municipality of Tripoli includes not only the city proper – generally the neighborhoods that surround the city center that is focused on the iconic Ottoman-era clock tower called Seehat Tell (Hill Square) and the old souqs (markets) that are a major tourist destination for the city – but two other semi-autonomous conglomeration of neighborhoods that were in the past distinct entities from Tripoli. Over time and due to increasing urbanization, these areas became incorporated into the city.

The first of these neighborhoods is Al-Mina (The Port), a relatively prosperous, multi-sectarian (predominately Sunni Muslim and Christian) area with the city’s most expensive and active commercial real estate that extends out into the Mediterranean. Al-Mina not only houses Tripoli’s wealthiest residents (including the personal home of Lebanon’s current Prime Minister, Najib Miqati) but is also the site of one of its most popular attractions, the sea-hugging walkway called the Corniche. Like its larger cousin in Beirut, Tripoli’s Corniche is a well-known destination for local residents and a free-for-all of uncontrived sectarian interaction. The Al-Mina neighborhood is also the most important center of the retail and service industries in Tripoli, and a major source of employment for the city’s less prosperous residents.

In addition to the Al-Mina neighborhood, the second semi-autonomous area of Tripoli is an arc of neighborhoods. This lies directly to the north and east of the city, from the municipality of Beddawi bordering the sea, inland north east-ward through the hill neighborhoods of Bab Al-Tabbaneh, Jebel Mohsen, Qobet Al-Nasr (locally referred to as Ibbe and pronounced “Ib-bay”) and Abi Samra. The Abu Ali River, which winds down Mount Lebanon through Tripoli and empties into the Mediterranean Sea, now reduced to a sliver of a trash-filled rivulet, separates these areas from the central sections of the cities. The ongoing politicized sectarian conflict between Bab Al-Tabbaneh and Jebel Mohsen is generally confined to this area, with the surrounding neighborhoods of Beddawi, Ibbe, and Abi Samra further east serving as major points of strategic depth and re-supply for Bab Al-Tabbaneh’s Sunni Islamist fighters.

Beddawi in particular has become such an essential commercial section of the city, especially for farm produce, construction materials such as cement and limestone, and labor, that it is difficult to justify its exclusion from Tripoli proper. The bulk of Beddawi’s economic activity occurs around the Beddawi Palestinian refugee camp inside of the neighborhood, and is linked to the rest of Tripoli through the active and crowded Seehat Bab Al-Tabbaneh (Bab Al-Tabbaneh Square). Beddawi and its adjacent neighborhoods are referred to as hay sha’abi (popular neighborhoods), lower middle class and working class neighborhoods where the bulk of the city’s 500,000 people reside.

Tripoli is widely regarded as a place of poverty and frustration, with its people shackled to a local economy that is underdeveloped and unbalanced, suffering from endemic underemployment, and spectacular bouts of violence and rancor. Even the nicer stereotypes of the city have the effect of shallow compliments. Tripoli, the “Treasure of the East” as its more ebullient backers call it, still has to overcome the notion, especially from potential tourists and travelers, that it is a city that closes its doors after dark. In essence, Tripoli is regarded as one large bedroom community that has some appealing diversions by day, and less attractive prospects for personal enjoyment by night.

Travelers go to Tripoli for the maamoul, helwet al jibn, and baklawa, pastries that have earned the city regional and international fame, and enjoy a cup of Arab-style coffee, black as the devil and sweet as a stolen kiss of course, to compliment them. The city is cheaper than Beirut, and proudly advertises that fact, enticing the visitor for a quick snack en route to Lebanon’s more famous tourist destinations and symbolic sites. Tripoli is not too far from the soaring Cedars of northern Lebanon, the “Cedars of God”, and the picturesque red-tiled roof villages that rise from the hills, peering down upon the majestic Qadisha Valley that surround them. After a quick bite to eat in Tripoli, the traveler is usually off to the bone-white sands of the beach resorts of Chekka slightly south of it, and to the night clubs of Batroun, where unlike conservative and traditional Tripoli, the fun does not stop at 9pm.

Tripoli’s status as the “First City in Syria,” its wealth of historical sites, including bath houses, bazaars, mosques, and a foreboding Crusader-era citadel that overlooks the city from the north, are regarded as interesting, but not quite as splendid as the cultural treasures of the Syrian cities of Aleppo and Damascus. Embattled Homs and Hama, Tripoli’s historical trading partners that are only an hour and a half drive from Tripoli across the Syrian border, have a reputation for having the more emotionally-powerful and important historical sites. In this sense, Tripoli is reduced from the second-largest city in Lebanon with a treasure trove of valuable cultural and historical attractions, to an “ugly cousin” city that is more a provincial town with a depressed economy and an active and embarrassingly lingering action chain of sectarian conflict.