It will be a while until we know what or who triggered the explosion destroyed the Beirut port and, with it, half of the Lebanese capital, on August 4. What we know for sure is who the ultimate culprits are, and, unfortunately, none of them are included among those under house arrest or currently being interrogated: the corrupt political mafia that has controlled and exploited the lives of ordinary Lebanese for many years. Each one of those in power, directly or indirectly, has contributed to the blast that not only killed at least 200 people and wounded more than 6,000, but also destroyed Lebanon’s desperately needed economic lifeline, turning the country into a beggar state that must survive on external charity.

The fact that the petition launched on the eve of President Emmanuel Macron’s visit to Beirut calling for Lebanon to return to the French mandate gathered 50,000 signatures in the first 24 hours is representative of the hopelessness that has pervaded this small, but historically proud, creative and industrious nation. The fact that regional and international scavengers have come closer, circling the Lebanese wagon, seeking to complete their meal, is testimony to the dangers that lie ahead as Lebanon must try to protect the last remaining elements of its sovereignty against another assault.

This assault will further compound the UN Security Council ruling that overruled Lebanon’s parliament in the case of Rafiq Hariri, the former prime minister assassinated in 2005 — a process that has lost both its respect and even its entertainment value.

But that is a discussion for another day when the delayed ruling is announced. For now, in the midst of one of the most destructive episodes in the country’s recent history, the Lebanese people find themselves faced with not only the greatest challenge to their survival as a nation but also the loss of what they fought hard to defend in the face of foreign usurpation: their ability to continue as a creative nation of free thinkers and artists and, above all, as partakers of a free political process that is the envy of all those subjugated to dictatorships in the region.

Just two days apart, 75 years ago, in Hiroshima, Japan, another proud and industrious people were smitten by unprecedented magnitude. While the nuclear bombings of Hiroshima and then Nagasaki were a deliberate act of premeditated evil, the jury is still out on Lebanon’s Beirushima. The jury is also still out on whether the Lebanese will follow the footsteps of their predecessors to rebuild their country into a vibrant and transparent economic regional player, but without surrendering the strength that first liberated most of their land and now continues to protect its territorial integrity — the last line of defense for what remains of Lebanon as a nation.

Beyond that imperative, nothing must be held sacred if reform is to be the true way forward. Losing that imperative is what many of the country’s regional enemies will seek to force upon Lebanon, exploiting the opportunities this very dark hour provides them. This will indeed prove to be a challenge that requires strong leadership that must protect Lebanon from foreign intervention.

As shock turned into more street anger, Lebanon’s fragmented society has forgotten its religious and sectarian divides and united against a common internal enemy: the corrupt political system that has abused its democratic process and misruled Lebanon for far too long. This display of national unity is the silver lining that will hopefully ultimately save Lebanon.

The entire political system must be overhauled if Lebanon is to survive as a nation. And the onus of leading the way lies with the people and not the leadership. Lebanese politicians have proven themselves to be one of the most corrupt political elite in the region, owning or being involved in everything ranging from garbage collection to power generation to banks that lend money to the government at exorbitant rates. The structure has created a ruling class with everything to lose and nothing to gain from economic reform. These are not the people trustworthy of leading the transformation the country so desperately needs.

On top of everything else, its ailing economy is loaded with more than 1.5 million refugees, the result of Israeli occupation, the Syrian Civil War and many regional conflicts that Lebanon is made to pay the price for. It is, therefore, not surprising that highly explosive ammonia nitrate abandoned at the port of Beirut for six years would be allowed to lie hidden and become a powder keg waiting for something or someone to trigger what Brian Castner, the lead weapons investigator for Amnesty International’s Crisis Response Team, called “the biggest explosion in an urban area in decades” that made 300,000 people homeless.

In a country where economic indicators have lost their meaning, where law and order are decided by a judicial mafia, where the role of both political business leadership has lost its demarcations and where a foreign president is popularly welcomed where a native is banished, it is clearly a time to fold and start all over again. And only the street, now prompted and indeed strengthened by a massive explosion, can lead the way. Whether the blast that devastated the nation’s capital has also wiped away the corruption that brought Lebanon to its feet, only time will tell. For if it hasn’t, nothing ever will, and the noble, generous and hardworking Lebanese will become a nation that once was.

This is, of course, assuming it was something, not someone, who pulled the trigger. Should it, in the end, become evident that the explosion was another act of premeditated evil, then all bets are off. Our worst fears will become true, and Lebanon, and the entire region, will go up in flames. Let us hope Donald Trump was once again wrong when he suggested the blast had been an attack, and let us hope that foreign election campaigns have not been the reason Beirut blew up, with the potential to take with it the rest of what’s remaining of our region. 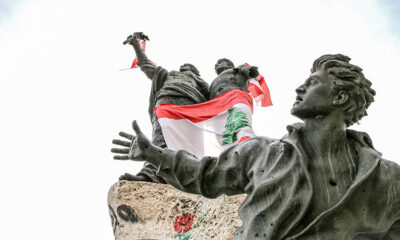 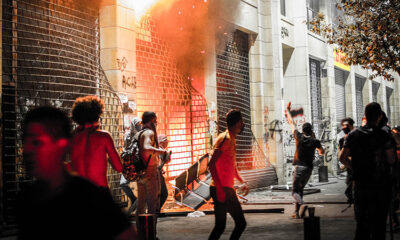