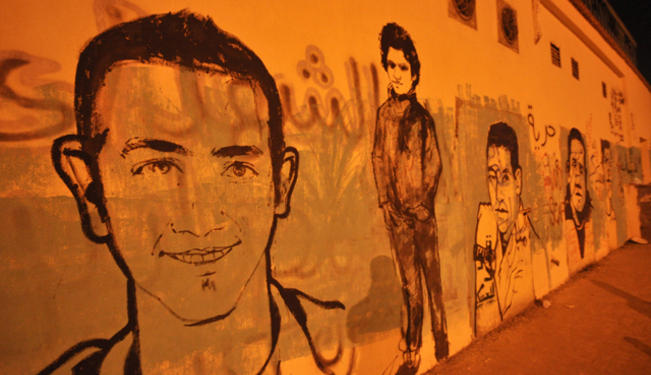 The renewed clashes in Egypt are as much a protest against Morsi’s power grab, as they are with the failure to reform the police and security forces.

A pledge by Egyptian President Mohamed Morsi to re-open all cases against those responsible for attacks on anti-Mubarak and anti-military protesters in the last 21 months did little to prevent militant soccer fans clamoring for justice for hundreds of dead protesters, including 74 of their own. The soccer fans joined the outpour of anger against the president’s unilateral decision to grab wide-ranging powers.

Morsi had hoped that the re-opening of cases, which largely failed to condemn those responsible for repeated crackdowns on protesters, would soften the blow of his power grab and would prevent the militant, highly politicized, street battle-hardened soccer fans from taking to the streets.

The fans or ultras, one of Egypt’s largest civic groups after Morsi’s Muslim Brotherhood, played a key role in last year’s toppling of former president Hosni Mubarak. The ultras subsequently emerged as the most militant opposition to the military that led Egypt until the election last July which brought Morsi to power.

The fans’ threat to disrupt soccer matches have prevented the lifting of a ten-month suspension of professional football imposed in February after 74 supporters of crowned Cairo club Al Ahly SC, died in a politically loaded brawl in the Suez Canal city of Port Said. Over 70 people, including nine mid-level security officials, are on trial in Cairo for their role in the worst incident in Egyptian sporting history in a slow-moving legal process.

The ultras have insisted that they would prevent a lifting of the suspension as long as justice for the 74 dead has not been served. The outpouring of public anger against Morsi’s power grab offered them an opportunity to press their demands for reform of the security forces, an end to corruption in Egyptian soccer, and the removal of Mubarak-era appointees from official positions in the Egyptian Football Association (EFA) and the boards of clubs.

It also gave the ultras — many of whom are unemployed, under-educated youth who view the police and the security forces as the representatives of Mubarak era repression, and see battles with them as an exertion of their wounded dignity — a renewed opportunity to confront law enforcement. In a replay on the anniversary of battles last year that lasted several days on Mohammed Mahmoud Street near Tahrir Square in which 42 people were killed and over 1,000 wounded, hundreds of ultras have been fighting the police and security forces on that same street for the past five days.

Thousands of ultras joined mass protests against Morsi’s power grab on Friday at Tahrir Square, chanting: “The people want to topple the regime,” “Do not be afraid, Morsi has to leave,” and “Down with Mohamed Morsi Mubarak.” Hundreds of more ultras confronted the security forces on Mohammed Mahmoud and Qasr al-Aini Street with rocks and Molotov cocktails. They said the security forces were responding with live gun fire and tear gas. Again like in past battles on Mohammed Mahmoud Street, tens of protesters suffering from suffocation and other injuries were ferried on motorcycles to a field hospital set up in Tahrir Square.

Fifteen-year old Ahmed Mounir told Egypt’s Ahram Online that his brother had been injured in last year’s Mohamed Mahmoud clashes and had to have a leg amputated. “I have been in the square for three days now. I want to secure my brother’s rights and I don’t care if I live or die,” Mounir said.

Mounir’s battle and that of his fellow ultras is one for karama or dignity. Their dignity is vested in their ability to stand up to the dakhliya, the interior ministry that controls the police and the security forces; the knowledge that they no longer can be abused by security forces without recourse and the fact that they no longer have to pay off each and every policemen to stay out of trouble.

In doing so, the ultras build on a perception perpetuated by repressive security forces in popular neighborhoods and in the stadiums of their arbitrary use of force. In the words of scholars Eduardo P. Archetti and Romero Amilcar police and security forces’ “use of physical force aided by arms of some kind…[was] exclusively destined to harm, wound, injure, or, in some cases, kill other persons, and not as an act intended to stop unlawful behavior that is taking place or may take place.”

Official foot-dragging in holding security officers accountable adds to that perception, giving “police power…the aura of omnipotence” that “at the same time lost all legitimacy both in moral and social terms,” they argued — a development reinforced in post-revolt Arab societies such as Egypt by the failure to date to reform the security forces. “To resist and to attack the police force is thus seen as morally justified,” they wrote.

The renewed clashes on Mohammed Mahmoud Street are as much a protest against Morsi’s granting to himself of powers that include immunizing his decisions against legal challenges, and the banning of courts from disbanding the controversial council drafting Egypt’s new constitution and parliament’s upper chamber, as they are the highlighting frustration with Morsi’s failure to address the urgent need for reform of the police and the security forces.

Without such reforms, violent street protests are likely to erupt on every occasion that offers itself such as happened during recent protests in front of the US embassy in Cairo against an American-made anti-Muslim video clip. Those protests led to the death of the US ambassador and three other US officials in the Libyan city of Benghazi. Reform of the police and security forces would open the path to Egypt’s return to post-revolt normalcy. It would also allow for a lifting of the ban on professional soccer; a signal of a return to the calm needed for Egypt’s road to economic recovery.

James M. Dorsey is a senior fellow at the S. Rajaratnam School of International Studies and the author of The Turbulent World of Middle East Soccer blog.