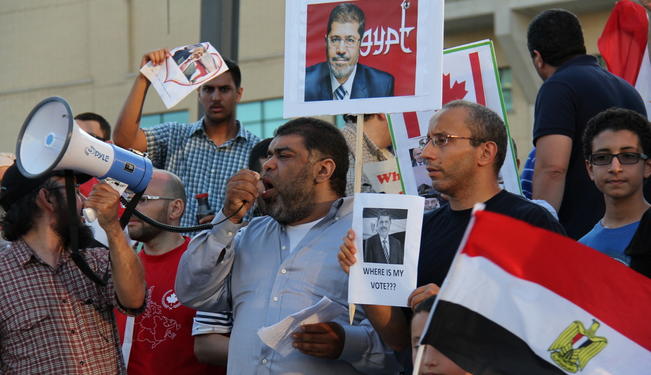 Two sayings often come to my mind when I think about the Egyptian revolution these days. The first is attributed to Prophet Mohammed: “khayr al-amur al-wasat” (the best path is the middle one). The second is attributed to James Baldwin, replacing “love” with “revolution” (although I think there are many similarities): “Love does not begin and end the way we think it does. Love is a battle, love is a war, love is a growing up.”

I am one of those who think the situation in Egypt is the result of a constellation of complex factors that simply cannot be reduced to a “coup” or a popular revolt. What occurred was a popular revolt that led to a coup, which was implicitly called for by much of the Egyptian population.

As such, I find myself repulsed by extreme interpretations of the situation in Egypt in either direction. It is certainly true that Egypt today bears all of the signs of a brutal counterrevolution: journalists have been jailed (although 60 political prisoners have recently been released); dissent is silenced, sometimes brutally; and a climate of xenophobia fills the airwaves.

Many have been rounded up and jailed on suspicion of being a member of the now outlawed Muslim Brotherhood. Many who supported the demonstrations of June 30 do not wish to affiliate themselves with the events that have transpired after July 3.

Others feel pain over these events, but are in a state of confusion about what the alternative would have been. Still, others believe it is more or less justified.

Relatedly, protests in many of Egypt’s universities by Muslim Brotherhood supporters have crossed the line into brutality, including reports of damaging property, burning buildings, ripping the clothing off of a female professor, and assaulting elderly male ones.

There are frequent terrorist attacks across Egypt that often target security installations, such as during the December 24 attack in Mansoura and around the recent January 25 commemoration.

Even though responsibility for these attacks was claimed by a group called Ansar Bayt al-Maqdis, it is difficult to believe the Muslim Brotherhood had no involvement. After all, the attacks were stepped up following Mohammed Morsi’s ouster and these Islamist groups are ideologically aligned — even if loosely.

The Brotherhood’s allies have taken their fight off Egypt’s shores by launching an international campaign against the Egyptian government in American and European universities and airwaves, many of which shockingly parrot Muslim Brotherhood talking points without offering a counterview in a nation that strongly supports the military intervention against Morsi.

Another fact, which is difficult for Western observers to grasp but is not at all difficult for many Egyptians to intuitively understand, is the following: Egyptians currently have terrible options and so they support what they consider to be the lesser of two bad options.

Many, including myself, have written extensively about why so many Egyptians found the Muslim Brotherhood’s year in power so intolerable that they didn’t want them to finish their term.

In brief, Egyptians felt that under the fig leaf of a democratic election, the Muslim Brotherhood took gross advantage of its slim mandate in a revolutionary context to put forward policies that had the potential to seriously damage Egypt.

In other words, under the cover of a “revolution” and “democracy” — a democracy in which the Muslim Brotherhood eked out a win by 1.3% of the vote against a contender from the old regime that had just been thrown out in a revolution one year prior — the Egyptian population was being slowly subjected to what they call takhwiin, or the “Brotherhoodization” of the state.

With this Brotherhoodization came a number of appointments to sensitive, high-skilled positions based on loyalty over merit, and a theocratic agenda of some kind that was uncomfortably unclear to many.

Most seriously was the perception of shifting Egyptian alliances toward extra-judicial jihadist groups and their shared pan-Islamist agenda.

The idea is that Egypt is much too big, both population wise and in the imagination of the region and the world, to have been hijacked in this manner. This is why – and perhaps this clears up at least some confusion – many Egyptians chose and continue to support the army and Gen. Abdel Fattah el-Sisi, who they view as having saved the country from disaster.

The Media and the Impact of Syria

The media in Egypt is clearly aiding this support for Sisi, which often turns to hysteria and dangerous xenophobia against Islamists and even revolutionaries — or anyone who departs from the military’s authoritarian line.

The media is feeding on fears of Egypt being on the brink, having come close to collapsing into a different understanding of a regional order that favors the pan-Islamist over the nationalist. For many Egyptians, this idea is anathema.

In addition, one can look at deeply troubled nearby Syria to see what happens when the state collapses and the army suffers major defections — a vacuum created where jihadists, bearing ideologies and agendas that have little to do with the desires of the native population, flood in to destroy the country by imposing their rule, based on a radical interpretation of Islam.

Is it any wonder that Egyptians went into near cardiac arrest after Morsi’s “rally for Syria,” in which he all but called for Egyptians to travel over the borders and wage jihad? Or standing at a state function with clerics who openly engaged in taqfir (declaring a Muslim a kafir, unbeliever) against Shi’as and propagated distrust against Christians?

No one, especially considering Mubarak’s presidency, could have imagined such sentiments coming from the president of Egypt. A dangerous line had been crossed.

The military transition certainly has left its own trail of blood. This includes the massacres at Rab’a al-Adawiyya, where Morsi supporters were cleared from their sit-ins after 47 days in one of the bloodiest moments in Egypt’s recent history.

Seeing the Facts as They are Embedded on the Ground

Three years on, I have learned that I no longer believe in critique for the sake of critique. This is an admittedly unusual statement for an academic to make. However, I am convinced that critique and mere opinion offering — without a serious consideration of facts as they are embedded on the ground in the specific country and not strictly based on high theory, including democratic theory — is the easiest form of intellectual labor there is.

Unfortunately, it is woefully insufficient. In an era of revolutionary change in Egypt whose course no one predicted, there is no reason to assume that comparing a reading of events in the county — often from afar — to democratic theory, produced in the West for another context entirely in previous centuries, would provide the best insight.

Egyptian affairs must be understood in the context of Egyptian particularities, which include an ethnographic study of its peoples’ attitudes and then having the humility to take those attitudes seriously.

Some have made critique for the sake of critique into a career. In the West, we have reams of analysis on Egypt that refer to Egyptian culture and sentiment only in the vaguest terms, choosing only to concentrate on an analysis of state institutions from a Western perspective, both practical and theoretical.

A final reason one might sour on critique for the sake of critique is empirical. Many of the very same people who shouted “irhal, irhal” (step down) to Morsi from his first day in office, seemed to run quickly to the sidelines after June 30 and July 3 were said and done, as if they had nothing to do with any of it.

“But we never wanted the army,” they say. In political terms, this is a meaningless statement, as it is a basic fact that the army brokers political transitions in Egypt. It is little wonder that Egyptians who want to live a normal life no longer have a lot of regard for professional revolutionaries, who will not accept the consequences of their actions.

Not Just a Coup

Rather than reading events in Egypt as a simple coup, we should begin to grasp the much deeper and wider implications of what occurred.

The most important point is that political Islam has been dealt a major blow in Egypt; after all, what happens in Egypt reverberates across the Arab world. The effects of this blow are only beginning to show and, if leveraged correctly, can amount to a major milestone in the crucial cultural aspect of the revolution that started in 2011.

The second point is that the people largely chose a military coup and will now have to live with the consequences of an iron fist rather than an indiscernible theocratic one. This is an ongoing revolution and, we, like the French, have time.

The most important orders of business are freeing political prisoners and jailed journalists, and overhauling the Egyptian economy. I would venture to say that most Egyptians find this much more important than a “democratic transition” — which they have recently tried and found unsatisfying, to say the least.

It is also very important, though much more difficult, to figure out how to broker some kind of political deal with the Islamists. However, at present, this is impossible with their frequent terror attacks and the military regime’s incessant propaganda and dragnet arrests.

The army will overplay its hand. This is inevitable, as a military regime does not have the required skills to truly bring Egypt the reforms it needs.

It would be wise of Field Marshal Sisi to conclude that, for this reason, it would be best for him and Egypt if he did not run for president. Having said that, there is, however, a serious question of who would be the best person to run Egypt instead.

It is near impossible to predict what will happen. But having a strong national institution in charge of the country — even if this power is a mirage — is what (most) Egyptians need psychologically to reassure them that their country will not collapse into the chaos that citizens see all around them.