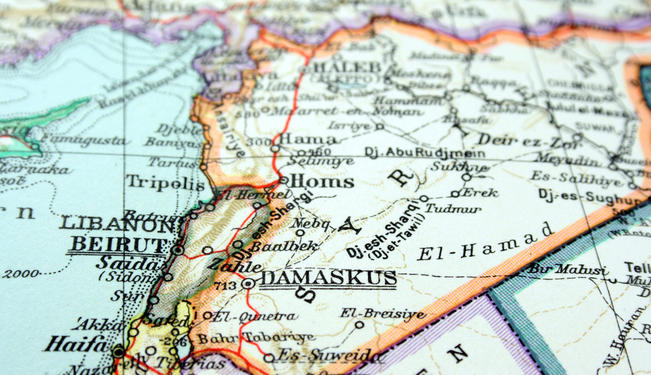 Chris Zambelis analyzes the recent decision of Lebanese Salafist cleric Shaykh Ahmad al-Assir to mobilize an armed militia to join the uprising in Syria and its implications for Lebanon. The role of Al-Assir, who singles out Hezbollah and Iran as malicious and hegemonic forces, has to be understood in the unique context of his home base in Sidon, southern Lebanon. [Note: This article was originally published by The Jamestown Foundation.]

With the militarization of the Syrian uprising complete, the makeup of the violent insurrection that is raging across Syria remains a topic of scrutiny. The assemblage of competing opposition forces persists in its attempts to coalesce a viable political front to challenge the Ba’athist regime; yet it has become apparent that radical Islamists of various ideological persuasions will dictate the course of the rebellion. The role being played by foreign fighters who are flocking to Syria to join local armed factions adds another dangerous element to an already combustible mix. The enduring conflict has also elevated the risk of the violence spilling over into neighboring countries, especially Lebanon. In this context, the recent decision by hardline Lebanese Salafist cleric Shaykh Ahmad al-Assir to mobilize an armed militia to join the uprising in Syria bears closer attention. From his base in the southern Lebanese port city of Sidon, al-Assir announced on April 22 the establishment of the Kataib al-Muqawama al-Hurr (Free Resistance Brigades), a purported volunteer force consisting of Lebanese Sunni Muslims who have committed to joining the armed opposition in Syria.

Combining a proclivity for confrontation, inflammatory rhetoric that he broadcasts during his sermons at the Bilal bin Rabah Mosque (located just outside of Sidon in Abra) and a network of online social media outlets, al-Assir has emerged as a polarizing figure in Lebanon. Owing to a militant Salafist worldview that tends to see Shi’a Muslims as heretics and apostates, al-Assir’s oratory is replete with invective targeting of Hezbollah and Iran. Al-Assir singles out Hezbollah and its Iranian patron over their activities in Lebanon and the alliance they share with Syria. For al-Assir, Hezbollah and Iran represent hegemonic and malicious forces that aim to divide Muslims and subjugate Lebanon. However, al-Assir, whose mother hailed from a Shi’a family, also claims to distinguish between Shi’a currents such as those led by the Lebanese-Iranian cleric Musa al-Sadr, who founded the Lebanese Amal Movement, and that promulgated by Iranian cleric Ayatollah Ruhollah Khomeini, who led the 1979 Iranian Revolution.

Nonetheless, al-Assir’s incendiary politics cater to a conservative Lebanese Sunni constituency that is heavily influenced by sectarianism in the absence of a credible ideological alternative at a time of heightened sectarian tensions in Lebanon. Al-Assir’s rise in prominence has occurred amidst the growing influence of the Salafist current in Lebanon, a trend that has come at the expense of mainstream Sunni-led political parties and movements that have proved, in the eyes of their supporters, to be weak in the face of Hezbollah. The expansion of Salafist influence in Lebanon was accelerated, for example, by the violence in 2008 in Beirut and elsewhere in Lebanon that witnessed Hezbollah and its allies rout militias associated with the March 14 bloc of political movements led by former Lebanese Prime Minister Saad al-Hariri’s Future Movement.

Al-Assir frames the uprising in Syria in sectarian terms in which an heretical and apostate regime headed by an Alawite is waging war against an oppressed Sunni population: “There is a religious duty on every Muslim who is able to do so…to enter into Syria in order to defend its people, its mosques and religious shrines, especially in al-Qusayr and Homs.” Congregants of the Bilal bin Rabah mosque, according to al-Assir, are already active on the Syrian battlefield. Volunteer fighters are reportedly being provided training and other forms of logistical support in Lebanon prior to being dispatched to Syria. The creation of al-Assir’s fighting force is the apparent culmination of earlier threats to muster a militia to represent Lebanese Sunnis. After a series of clashes in November 2012 between his supporters and those of Hezbollah in the Taamir Ayn al-Hilweh district of Sidon, al-Assir announced his plans to organize an armed wing to counter “the Iranian project” in Lebanon (i.e. Hezbollah).

The intended destination of al-Assir’s fighters provides critical insight into his wider objectives. Al-Assir affirmed that his force would be joining the fight in the Syrian town of al-Qusayr, among other places. The significance of his reference to al-Qusayr, an opposition stronghold located in Homs Province along the Syrian-Lebanese border, should not be understated. Al-Qusayr and its vicinity has been the site of heated battles between insurgents and the Syrian security forces. In addition to occupying a strategic location between Damascus and the Mediterranean coastal region, the environs of al-Qusayr are host to a demographic that is diverse in its composition and politics – the region is home to villages that include thousands of Shi’a, Sunnis, Christians and Alawites who claim to be Lebanese.

While the true extent of its operational activities in Syria remains a matter of debate, Hezbollah has been candid about its presence in the vicinity of al-Qusayr. For Hezbollah, the presence of self-identifying Lebanese, many of whom maintain family and kinship bonds with Lebanese residing over the border in the Beka’a Valley, warrants their protection. Hezbollah has since reaffirmed its commitment to defend these villages from the insurgents. Meanwhile, in a seemingly calculated attempt at publicity, video footage that was reportedly recorded in al-Qusayr showing al-Assir firing a weapon beside members of the armed opposition was broadcast a few days after the formation of his militia. Photographs of al-Assir sitting on top of a Syrian tank captured by insurgents beside his son and members of the armed opposition were also published.

Al-Assir’s dramatic foray into Syria has implications for Lebanon. Lebanese foreign fighters already constitute a sizeable part of the foreign militant force fighting on behalf of the Syrian opposition. At the same time, it is difficult to conceive how al-Assir’s hastily organized militia can tip the scales in favor of the opposition in heavily contested areas such as al-Qusayr. Rather, al-Assir may attempt to leverage his actions in Syria to position himself as a guardian of Sunni interests in Lebanon.

Owing to political, demographic, socio-cultural, economic and geographic aspects, Lebanon’s fortunes are inextricably linked to events in Syria. Equally important to understanding al-Assir’s role in Lebanon is the human geography unique to his base in Sidon, a predominantly Sunni city whose inhabitants lean strongly toward the March 14 bloc and, increasingly, hardline Salafist currents. The March 14 bloc has led the campaign to support the political and armed wings of the Syrian opposition. Yet, Sidon is located in Lebanon’s mostly Shi’a south, a locus of support for political parties and movements that make up the Hezbollah-dominated March 8 bloc. This has not prevented al-Assir from inciting his supporters to provoke Hezbollah in Sidon and elsewhere through public shows of force, including demonstrations and sit-ins in contentious locations such as Shi’a mosques that attract Hezbollah partisans.

Al-Assir’s actions have resonated beyond Sidon. Hardline Salafist ideologues such as Shaykh Salem al-Rifai, who is based in Tripoli, another sectarian flashpoint city, has also endorsed al-Assir’s call for Lebanese Sunnis to take up arms in Syria alongside the opposition. Al-Assir’s increasingly strident positions are likely to further arouse political and sectarian tensions in Lebanon, raising the specter of violence and instability in the months to come.