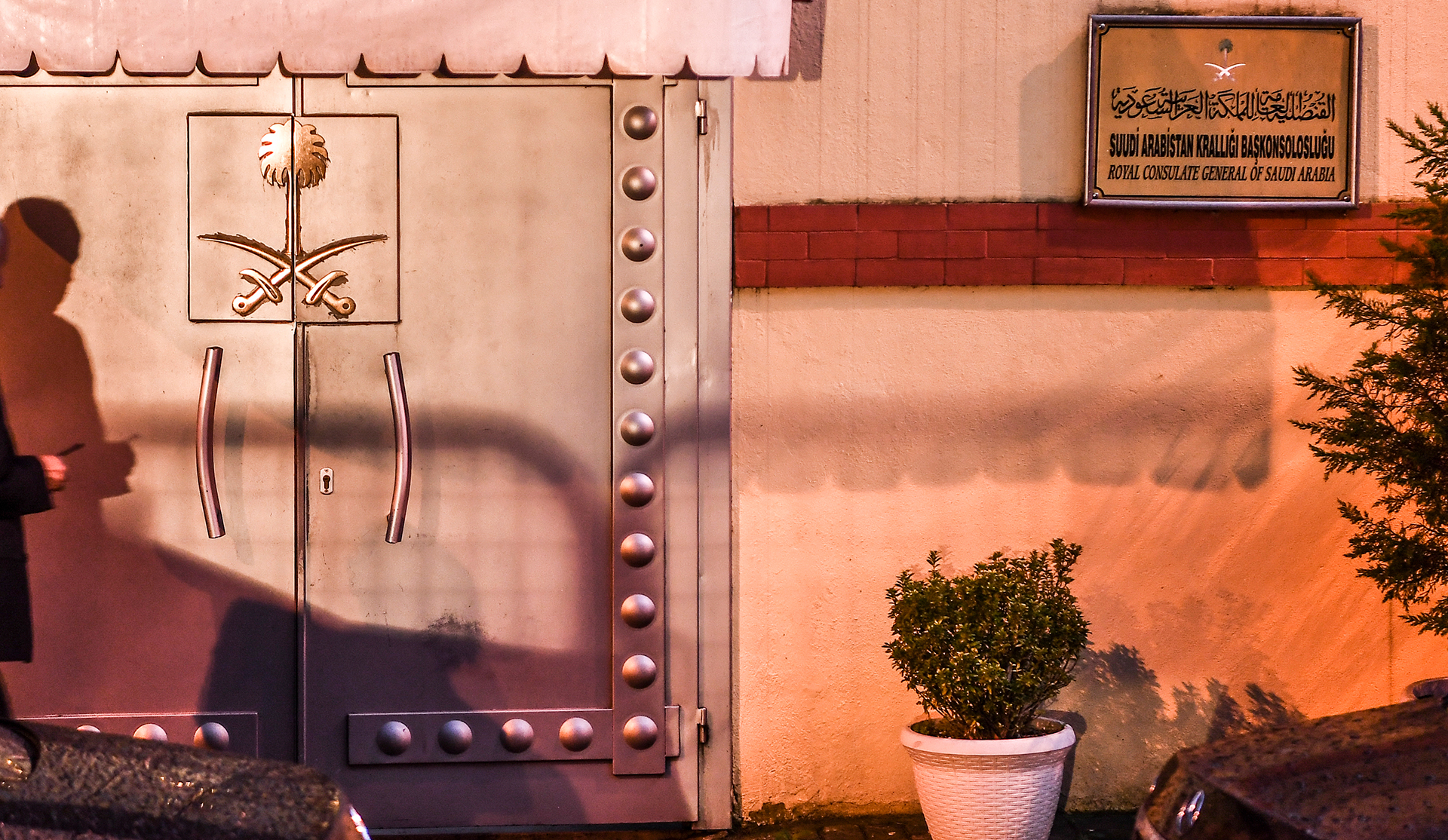 A senior Turkish official says Turkey and Saudi Arabia will form a “joint working group” to look into the disappearance of Saudi writer Jamal Khashoggi.12 SEPTEMBER 2018 istanbu at Turkey

On October 2, 2018, Jamal Khashoggi, a Saudi expatriate journalist, walked into the Saudi Consulate in Istanbul. What then transpired resembled a 1920s American gangland-style killing, complete with the victim’s final pleadings, the executioners’ harsh words and the chilling sound of a bone saw dismembering the body.

We are fittingly reminded of the events of that horrific day by admirable reporting by the world media but none more so than The Washington Post, for which Khashoggi wrote on a semi-regular basis. On this anniversary, other media have come forward with their own memorials and reporting, including a CBS 60 Minutes interview with Saudi Crown Prince Mohammed bin Salman (MBS), a two-hour PBS Frontline exposé on the incident and the crown prince’s role, and an especially powerful tribute in Time by Khashoggi’s fiancée, Hatice Cengiz.

Many others around the world are doing the same. When a government sets out to eliminate a journalist for writing critiques of that government, the world media and governments that embrace free speech must speak out. But as despicably brutal as Jamal Khashoggi’s murder was, we must not forget that 55 other journalists were killed in 2018 and 16 so far in 2019, according to the Committee to Protect Journalists. Khashoggi was but a symptom, while the disease of official, ruthless government repression of free speech persists.

Aside from the media’s commendable effort to keep the memory of Khashoggi alive, two things are particularly striking after one year. First, the event has become the definitive signpost of Saudi Arabia’s undeniable descent into abject authoritarianism. The government and MBS continue to maintain the crown prince’s innocence in the murder. The CIA, the UN special rapporteur and the US Senate insist otherwise, arguing that in Saudi Arabia’s hyper-hierarchical decision-making structure, the hit could not have occurred without the knowledge of or authorization by Mohammed bin Salman.

The crown prince is the de facto leader of Saudi Arabia. He controls economic and oil policies, all the armed forces, the security and intelligence forces, and has completely marginalized the rest of the Saud senior princes — all a first in the 87-year-old kingdom’s history since its founder, Abdul Aziz al-Saud. The fact that MBS may accept responsibility for the murder obfuscates his continuing refusal to admit he either ordered or was aware of it beforehand. His explanation follows several ludicrously mendacious versions touted by the Saudi government since last year, all disproven by subsequent revelations. Even US President Donald Trump couldn’t help describing these pathetic attempts as “the worst cover-up in the history of cover-ups.”

Meanwhile, a court case against some of the accused reportedly proceeds in secret. The whereabouts of others implicated in the killing, including MBS’ close aide Saud al-Qahtani, remain unknown. If justice is ever done — increasingly unlikely given current circumstances — to any of those involved, the world will probably never know.

Khashoggi’s murder should not distract us from the ongoing persecution and imprisonment of Saudi women, dissidents, bloggers and others who have also bravely spoken out against the crown prince’s newly-established authoritarianism. Khashoggi once wrote: “Saudi Arabia wasn’t always this repressive. Now it’s unbearable.” The sister of an imprisoned Saudi women’s rights advocate underscores Khashoggi’s fear, describing the kingdom today as a “police state.”

During the violent rampage of al-Qaeda in the kingdom between 2003 and 2005, Saudi citizens trusted their security forces to protect them and ferret out the terrorists. The task was far from easy.

At that time, I was serving as deputy ambassador at the US Embassy in the kingdom. In the course of one incident — one of many that had sent residents into abject panic for their lives — when Saudi authorities suspected that terrorists were hiding in a particular neighborhood of Riyadh, I asked a senior official if they had considered a house-to-house search. His response impressed me: “We cannot violate the privacy and dignity of Saudi households without evidence.” In Mohammed bin Salman’s Saudi Arabia, the days of household sanctity or personal dignity are things of the past.

The world should not be confused by MBS’ so-called cultural liberation of the kingdom — the outdoor concerts, newly-opened movie theaters, women driving and lowered religious policing — or ambitious economic plans. They are his version of Rome’s “bread and circuses.” Politics — whether a misbegotten war in Yemen, roundup and shakedown of influential businessmen and officials in a Riyadh luxury hotel, harmless blogs on social media or genuine freedom for Saudi women — are strictly off-limits. Discussion of such matters is punishable by imprisonment, torture or even death. It’s the Vladimir Putin and Xi Jinping models, MBS-style.

The second factor lingering from Khashoggi’s tragic death is the perhaps equally tragic silence of the country that he hoped Saudi Arabia would one day come to emulate, the United States. Under President Trump and Secretary of State Mike Pompeo, America is vitiating one of its founding principles: free speech. Trump and Pompeo have gone to great pains to shield MBS from an increasingly vociferous Congress not yet ready to surrender its values. The president ostensibly has done it for billions of dollars in military weapons sales to Saudi Arabia, the modern-day version of 30 pieces of silver.

The Trump administration’s position remains all the more perplexing in light of the findings of the CIA and unanimous consent of the Senate as to the guilt of MBS. It would seem that the president is as impervious to America’s institutions as he is to its values.

Jamal Khashoggi’s death may serve as a signpost too for the US as it confronts the rise of authoritarianism worldwide. Should Moscow, Tehran, Damascus, Beijing, Budapest, Warsaw, Cairo, Manila, Caracas, Managua and Riyadh all take heart now in their new-found friend in the heart of liberty and democracy, the US? If so, then we should expect many more deaths to follow. Which might be just what the authoritarians are wishing for. In the words of the modern era’s authoritarian role model, Joseph Stalin, “A single death is a tragedy; a million deaths is a statistic.”

Before one journalist’s brutal death is relegated to a statistic, we should remind ourselves of the ideals he stood for, wrote about and dreamed for his fellow Saudis and for all the people of the Middle East. Those are the reasons that Mohammed bin Salman wanted his life extinguished. But, of course, ideas cannot be extinguished. As long as Saudi Arabia, the US and other governments turn away from his death, the longer all peoples struggling for genuine freedom shall be haunted by it.

Are Saudi Arabia and MBS Becoming a Liability for the White House?

Why Erdogan Had to Act on Khashoggi Killing

Can the Murder of Jamal Khashoggi Help Bring an End to the War in Yemen?

The US Is in Unchartered Territory with Saudi Arabia

The Death of One Man Is a Tragedy

The Disappearance of Jamal Khashoggi Confirms a Dangerous Trend