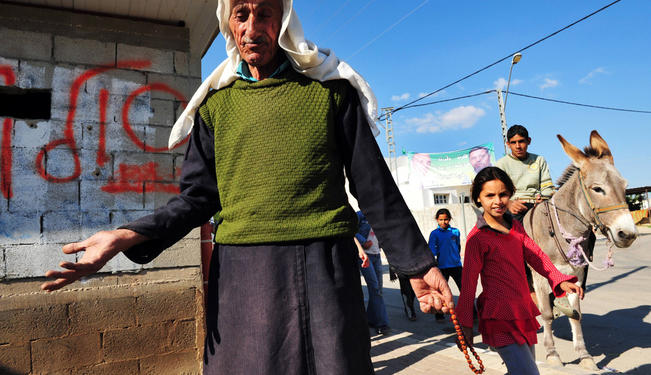 Injustice against Bedouins erodes the democratic character of Israel. This is the last of a two part series. Read part one here.

The same lack of sensitivity is responsible for the failure of urbanization of the Negev Bedouins in Israel. Resettlement into townships was done without proper planning for employment infrastructures. As of 2008, about half of the Bedouin population was already living in townships.

Bedouins have been deprived of their agriculture and pastoral lifestyle but no substitute activity has been provided, resulting in a high level of unemployment. Township infrastructures remain inferior to those of Jewish towns. One adverse effect of impoverishment and lack of proper health infrastructures is the return of diseases such as polio.

The abrupt transition from traditional lifestyle to urban setting has resulted in the destruction of the social fabric of Bedouin culture. Teenagers, having lost traditional references and the respect for elders that was so important in the village, contest parental authority and redirect their anger and feeling of injustice towards their elders. This results in an attitude of revolt, recourse to substance abuse (drugs, alcohol), and a propensity to join criminal activities and possibly Islamist movements.

Besides depriving Bedouins from their traditional identity after a hasty urbanization, the Prawer-Begin law is also a means of legalizing property rights and provision of services that creates a double-standard between Jewish and Bedouin citizens of Israel.

A Human Rights Watch report from 2008 describes how single-family farms owned by Jews in the Negev are easily regularized and receive services, while the 35 unrecognized Bedouin villages that meet the criteria formulated by the Central Bureau of Statistics are denied the same services.

Israeli Law Professor Alexander Kedar has established that Israel’s treatment of Bedouins’ access to land amounts to discrimination, violating international law, when individually-owned farms are granted to Jews only. To expose the injustice done to the Bedouins, NGOs that advocate for their human rights protection, such as Adalah, Bimkon, or Rabbis for Human Rights, organize learning tours of the disputed region.

On August 2, 2013, I joined a political tour of the northern Negev led by Rabbi Arik Ascherman from Rabbis For Human Rights. The tour included a visit to two unrecognized villages at the following locations:

In the village of Al-Araqeeb, we met with Sheikh Sayyah, the leader of the village, who gave us a historical background. The land where the village is located was purchased from other tribes in 1905. Outside the village is a graveyard as old as 1914, said the Sheikh. The village has been demolished and rebuilt 53 times as of July 2013. The population has been slated for relocation to one of the seven townships.

The leaders have taken the case to the Supreme Court, hoping that the villagers’ property documents from 1905 will allow for the village to be recognized. The Sheikh depicted how government-contracted airplanes sprayed their fields with Round-Up weeds management product, destroying their crops, and causing the death of sheep. Up to 4,500 olive saplings have been uprooted and the government requested a payment of NIS 2 million for the successive demolitions during 2010.

The Israeli government inaugurated the “Ambassador Forest” in 2006, planted in the vicinity of the village with funds from the Jewish National Fund in partnership with the evangelical Christian channel God-TV in the presence of dignitaries from 49 countries. Planting has been suspended until the case of the village is resolved.

The visit of Wadi Al Na’am village confirmed similar harsh measures against citizens of the state. What can justify these actions on behalf of the Israeli government?

The Government’s Justification of the Prawer-Begin Law

Rabbi Ascherman provided a possible justification for the Prawer-Begin law based on a security concern that prevailed in the 1950s when the first attempts were made at urbanizing the Bedouins. At a time when Egypt and Jordan encouraged terrorist incursions from the Gaza Strip and the West Bank (under Egyptian and Jordanian occupation), Israeli strategists had concerns about a continuous zone of high Arab population density in the northern Negev region connecting Gaza and the West Bank, easing infiltrations.

But this preoccupation has mostly disappeared today as the border with Gaza is highly sealed and the West Bank under occupation. Still, recent unrest in the Sinai Peninsula after the fall of Egyptian Presidents Mubarak and Morsi could revive this justification. Lawlessness prevails in the Sinai where Egyptian forces are unable to control Salafi jihadists and Bedouin tribes responsible for organized crimes, kidnappings and smuggling of goods into Gaza. But the Bedouins of Israel have consistently demonstrated their loyalty to the state and disconnect from the Sinai Bedouins, sometimes volunteering in the Israel Defense Force, praised for their skills as desert trackers.

Rawia Aburabia is an attorney for The Association for Civil Rights in Israel. With her colleague, Suhad Bishara from The Legal Center for Arab Minority Rights in Israel, in April 2012 she sent a memorandum to then-Minister Ze’ev Binyamin Begin describing their objections to the Prawer-Begin law, denounced as an injustice. The minister’s reaction would have been interesting to hear, but no response to this memorandum or invitation to express these objections was extended to Rawia and Suhad by the Israeli government.

To hear the government’s position, I requested an interview with Ariel Rosenberg, spokesperson for the Construction and Housing Ministry, but my request remained unanswered.

A right-wing NGO, Regavim, which is supportive of the relocation plan, expresses probably the closest view to the government’s position through Ari Briggs, the international relations director of Regavim. According to Briggs, the objective of the law is to stop uncontrolled illegal Bedouin settlement expansion.

The status of indigenous people attributed to the Bedouins, and the protection that comes with it, is contestable as most of the Bedouins arrived in the late 18th and 19th century from the Arabian Peninsula. A court ruling from March 2012 rejected the claim of land ownership dated from Ottoman rule, based on evidence that no settlements existed before the British Mandate.

The various positions about land ownership and indigenous rights are debated in the courts with a high level of technicality, making it difficult for a non-expert to have an opinion. But the defenders of the Prawer-Begin bill have failed to address the fact that the relocation of Bedouin populations in urban settings deteriorates the social fabric of the ethnic group.

Regardless of the legitimacy of the government land claims, this relocation approach fails to address the basic human security needs of the Bedouins, and in particular to provide employment that is adapted to their skills, while their previous lifestyle, on subsistence farming and goat herding, provided a means of survival. For the NGOs supportive of the Bedouin cause — Adalah, ACRI, Bimkom, and Rabbis for Human Rights — the only fair solution is to recognize the 35 unrecognized villages of over 400 inhabitants, with their land claims amounting to no more than 5.4 percent of the Negev surface.

The Prawer-Begin law has the characteristics of a nationalist move to expropriate Bedouin land in a legal way and acquire it for use by Jewish communities and the creation of army bases. This is a domestic issue, regardless of the regional connection between the Israeli Bedouins and Bedouins of the Sinai, Gaza, and the West Bank. The Bedouins of Israel are Israeli citizens, and this kind of double-standard among citizens constitutes an injustice tantamount to a form of discrimination that erodes the democratic character of the state of Israel.

In his address to the visitors of his village, Sheikh Sayyah declared that the Bedouins are willing to die in order to defend the right to their land. The passing of this law could lead to a violent confrontation with disastrous consequences.

A fair resolution of this issue would, on the contrary, allow Israel to stand out by comparison to Egypt that has neglected its Bedouin population in the Sinai, and would reinforce the loyalty of Bedouin populations towards the state of Israel.

*[This article was originally published by the Palestine-Israel Journal.]