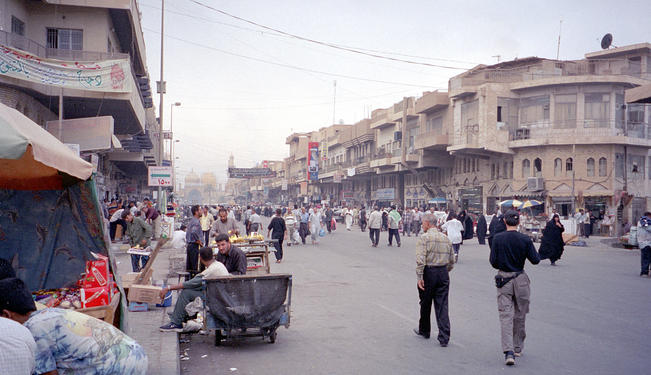 In the midst of growing unrest in the Middle East, Iraq is yet again ablaze, fueled by sectarian strife. Sunni protests, pushing against a Shia leadership, have led international spectators to already call a civil war in the country. Iraq, a country embroiled in sectarian warfare, must now rise above it.

Ten years ago, on May 1, 2003, then-US President George W. Bush boarded the USS Abraham Lincoln and infamously declared “Mission Accomplished,” regarding the fledgling war in Iraq. A decade later, talk of a civil war fueled squarely by sectarian rifts, has once again resurfaced.

The United Nations mission to Iraq last week said that more people were killed in attacks in the country in April than in any other month since June 2008. A total of 712 people were killed in the attacks and over 1,600 were injured. The most recent worrying resurgence of violence stems from a recent clash in the northern Iraq town of Hawija between Iraqi Security Forces and Sunni protesters.

Security forces allege that the protestors were harboring insurgents who had killed soldiers at a government checkpoint. Initial confrontations turned into denials, which then turned into violent clashes between the two groups after security forces launched an attack in the camp.

The Fight for the Sunni Voice

The clashes quickly became a symbol of the fight for the Sunni voice in Iraq. Sunnis have long felt marginalized by Shia Prime Minister Nouri al-Maliki and his government. When Iraq was looking to form its first post-invasion government, the United States and allied troops made a point to ensure an integrated government, free of sectarian divisions. Yet, in the following years, sectarian tensions arose and violence followed. In 2008, Sunni sheikhs, tribesman and volunteers in the thousands joined what was dubbed the “Awakening” movement in the country to curb the violence. The so-called awakening, coupled with the US troop surge, leveled off the growing internal warfare.

Five years after the “Awakening,” however, it seems that those same sectarian tensions are resurging and coming to a head.

Maliki, a Shia who fled Iraq in the late 1970s following a death sentence under Saddam Hussein, is seemingly using his current leadership in Iraq as a form of redemption for himself, as well as giving the Shia population power within the country. There is no better example of Maliki’s Shia power-play than his continued partnership with Shia Iran – despite continued pleas from the United States to end any collaboration with Tehran.

Seeing this power shift, also fueled by claims that the Shia are marginalizing Sunnis regarding work, salaries, positions, power and prestige, Sunni groups and tribes across the country have made a call to arms, giving direction to the underlying frustration amongst the sectarian group. Sunni Sheikh Abdul Malak al-Saadi, who has become a major voice in these most recent protests, even issued a fatwa saying that “self-defense has become a legitimate and legal duty.” The delay in provincial elections in Sunni-majority Anbar and Nineveh Provinces in Iraq, blamed on security issues, has only worked to deepen the feeling of sectarian marginalization.

Despite calls to end the armed violence by some Sunni leaders in Iraq as well as international and regional power players, it seems the clashes have gained a life of their own. The most alarming aspect of the escalation in sectarian violence is the currently slim margin of error in Iraq. The stakes for maintaining security and stability in the country are much higher now than they were in a pre- “Awakening” Iraq. While the United States has ended its presence in Iraq, general frustration that comes with living in a war-torn country has been brewing for over a decade, and some regional players are waiting to capitalize on an unstable country.

Neighboring Turkey, which is majority Sunni, has worked to support Sunnis in Iraq and has made no secret of its distaste for Maliki. Directly following the Hawija attacks, Arab Sunni leaders thanked Kurdish President Massoud Barzani, for opening Kurdish hospitals to those injured in the violence. Turkey has reportedly been cooperating with Sunnis in Anbar and Nineveh, in an effort to prop up the Sunni alliance with the Kurds.

The growing humanitarian and military crisis in Syria, which has dominated headlines, is also raising fears of spillover into Iraq.

Maliki actually made sure to point the blame of his country’s sectarian violence on the situation in Syria. In a recent speech, he said: “Sectarianism is evil and the wind of sectarianism does not need a license to cross from a country to another, because if it begins in a place, it will move to another place.”

He alleged further that Al-Jazeera and nine other satellite television channels were promoting a sectarian agenda, thus fueling the uprisings in the country. Based on these claims, Iraqi authorities revoked the ten channels’ operating licenses. The move to revoke the stations’ licenses, and the claims against them, are particularly concerning given that there are other indications of censoring the media.

Of notable concern in Iraq is also self-censorship by the media. “Nowadays, [Iraqis] know what the proper style of journalism should be, they know the ethics of journalism, the culture of journalism…but many times they choose intentionally to ignore that…They do that because someone is either paying them off, or because it is [in] their political interest or financial interest,” said Ammar Al Shahbander, chief of mission for the Institute of War and Peace Reporting in Iraq.

A recent BBC Media Action brief stated: "The current character of Iraq's democracy has been, and will continue to be, mirrored and to some extent shaped by its media.” The implications of the revocation of the ten media licenses in the midst of growing sectarian strife, the continued delay in elections, amongst other grievances, is an alarming indication that things may get worse in Iraq before there is any hope of getting better.

Maliki’s efforts to definitively place the blame for the violence outside the country — by saying that the unrest in Syria is spilling over into Iraq — may conceptually be justified. The truth, however, is, a flame can only ignite where there are flammables. The continued marginalization of the Sunni sect and its respective peoples has only created a disenfranchised, angry and resentful portion of a population in a country that is largely angry, tired and frustrated itself.

The Way Towards De-Escalation

The ignorance on this issue by the Iraqi leadership, whether in earnest or as part of a strategic facade, will not lead to bliss in this instance. Very rarely is there a direct prescription for de-escalation in Iraq but, in this circumstance, there may be one: The Iraqi government, under the leadership of Maliki, must listen to its citizenry. That may mean that Maliki must leave office, or it could mean that a real effort must be made to integrate the Sunni voice – engage Sunni groups in dialogue about the future of Iraq, ensure Sunni leaders are present or equal to the number of Shia leaders in the central government – or it could be both options. Yet, either way, it seems, it is time that Iraq is returned to all Iraqis: Sunni, Shia, and everything in between.

In the midst of headlines, talking heads, and political banter, it seems that sectarian strife in Iraq has always been the status quo. That is not, however, the case. Iraq used to be a country with a strong sense of nationalism. Iraqis of a certain generation are quick to engage in nostalgia about their neighborhoods in Iraq: stories of Christians, Jews, and Muslims of all sects, living side-by-side; “Al ayam il hilwa,” which roughly translates to “the good old days.”

Historically, Iraq has seen invasions, coups, leadership changes and numerous wars. Throughout all of the instability, there seemingly was a consistent sense of national pride that helped carry the Iraqi populous through.

The concept of Iraqi nationalism is not a new one. Around the time that pan-Arabism was growing, Iraqis were embracing the idea of their national identity. Once Iraq gained its independence from the British in 1932, the sense of nationalism only grew. General conversations with Iraqis before the war would reveal a sense of deep-seated pride in their country: the claim that the country was the “seat of civilization” (referring to its Babylonian and Mesopotamian past), Iraq’s early advances in science and technology, and the consequent onus Iraqis thus placed on education.

Politically, the rise and the institutionalization of the Ba’ath Party under Saddam Hussein fueled the sense of Iraqi nationalism – at least nominally, the Ba’ath Party in Iraq had strong socialist ideals. Yet, the suppression of the freedom to practice Islam in a Muslim country arguably laid the groundwork for sectarian tensions. The leadership void and the strong de-Ba’athification initiative by the Americans after the 2003 invasion, provided a forum for those pre-existing tensions to play out.

If Iraq wants a genuine return to peace and prosperity, then the current Iraqi leadership must rise above sectarian marginalization and understand that the country is made up of many factions. If the ultimate goal is for the country to strive in a post-war world, then, it can only be done free of sectarianism.