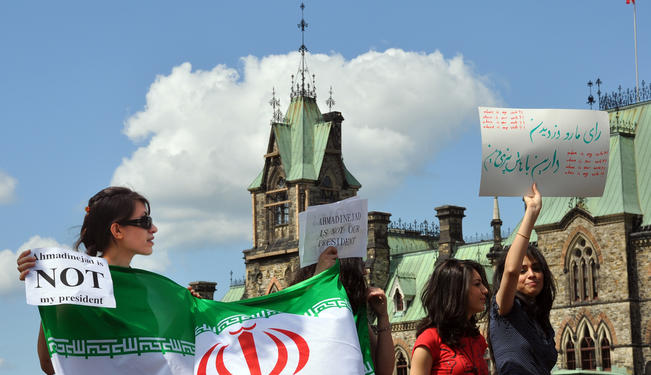 In the next few weeks, the political trajectory of Iran for the next decade will be revealed. Trita Parsi examines the upcoming Iranian Presidential Election.

The next few weeks in Iran — with the elections and the political drama around it — can prove decisive in determining whether a non-violent, narrow and arduous path towards democratization will remain in the medium term or whether the Middle Eastern powerhouse will turn more repressive, unfree and undemocratic for years to come.

The idea that the Islamic Republic can be reformed from within always rested on a shaky foundation. While the constitution has some democratic elements, most of them are ignored. While relatively free elections have been held at times, undemocratic limitations have always been present — and often decisive.

Ultimately, the question was whether the conservative elements around Iran's supreme leader would be forced to permit greater freedoms, more open elections, and openness towards the outside world in order to retain their grasp on some semblance of legitimacy — even if it eroded their own base of power. Or whether they would dispense with even the pretense of democracy and elections, and if need be, move the country in the direction of complete dictatorship.

It's been a bumpy road, with some positive developments during the presidency of reformist Mohammad Khatami, but also many setbacks. In the years under Mahmoud Ahmadinejad, however, the direction has been uniformly negative. Coinciding and often in tandem with increased tensions with the outside world, the accepted political spectrum in Iran has shrunk significantly in the past eight years and moved decisively to the right.

While a very slight glimmer of hope existed after the fraudulent elections in 2009 that the negative trajectory could be reversed through the ballot box, even that small probability may now have been eliminated.

By rejecting the candidacy of former President Hashemi Rafsanjani, a relative pragmatist and one of the founders of the Islamic Republic, Iran's Supreme Leader Ali Khamenei has clearly signaled that he is not even going to risk permitting the opportunity to reverse the contraction of the political spectrum of the past few years.

Less than three weeks remain till election day (June 14), so more surprises can come. But in general, the immediate implication of this is that the political spectrum has contracted even further. The differences between the approved candidates (with the exception of Hassan Rowhani and Mohammad-Reza Aref) are insignificant, and that this is not so much an election by the people as it is a selection by Ayatollah Khamenei.

In the longer run, the implications are even direr. Rafsanjani and Khatami were both heavily criticized by their own supporters by continuing to operate within the framework of the Islamic Republic after the 2009 election fraud. When Khatami voted in the parliamentary elections two years ago, some in his base viewed it as a treacherous act. The former presidents defended their actions by hinting that they had a plan — that there were still ways to use the ballot boxes to secure effective change. Many viewed Rafsanjani's decision to throw himself into the presidential race and Khatami and the reformist's immediate endorsement of him as the moment of truth for the gamble to operate within the system.

But with the rejection of Rafsanjani, that gamble appears to have failed. Even when the reformists and centrists swallow their pride and abide by the increasingly restrictive rules of the Islamic theocracy, they will not be permitted to vie for leadership.

This raises the obvious question of what incentives remains to continue to operate within a system that is geared to keep them out of power.

And if change through the ballot box is no longer viable, what other non-violent options remain at the disposal of the population? Will the probability of the increased repression, combined with the elimination of the ballot box path, cause some to start exploring other avenues for change? Or will the rejection of violence and the fear of ending up in a Syrian situation (in which the conflict was militarized by the regime, resulting in a bloody civil war with no end in sight), cause the population to bear the increased repression while awaiting better opportunities to challenge it?

There are few indications that Iran is in a revolutionary mood, despite its very negative political trajectory. There are several reasons for this.

First, though Khamenei can continue to contract the political spectrum, there is skepticism that he can govern in that manner. Eliminating political rivals from the political spectrum is not the same thing as eliminating their supporters from society. They are still there and they still oppose the direction Khamenei is taking the country. To succeed in governing a population that the regime is increasingly detached from, the Iranian regime is likely going to become even more repressive and a more naked authoritarian state. But history teaches us that though authoritarian regimes that lack legitimacy can prove tenacious, they cannot sustain themselves indefinitely. They all have expiration dates.

Second, though chances of peaceful change from within continue to shrink, the option was never attractive because it provided a high likelihood for success, but rather because the alternatives are so risky and costly. You don't have to look too far to realize that economic prosperity and democracy are rarely born out of bloodshed or civil war.

Thirdly, Iranians know exactly what a high-risk strategy may bring about. They are not going to repeat the mistake of the 1979 Revolution in which a dictator was overthrown, only to be replaced with another. They know quite well that uncontrollable change through revolution provides a premium to those resorting to violence — and not those practicing democracy.

But these calculations can change. In the next few weeks, we will likely find out the political trajectory of Iran for the next decade.