Battles over the origin of foods have forced some countries to rewrite aspects of their history.

Nothing in a swath of land stretching from the Atlantic coast of Africa to China is undisputed. Food is often emblematic of disputes over identity, history and political claims that underlie an arc of crisis wracked by ethnic and religious conflict; clamor for political, economic, social, national and minority rights; efforts by states and ethnic groups to garner soft power or assert hegemony and international branding; diplomatic leverage; and great power rivalry.

Israel and Lebanon fight hummus wars and join Palestine in battles over the origins of multiple dishes. Turks, Arabs, Jews, Greeks, Armenians and Iranians claim as their national dish baklava, a sweet whose variations over time reflect the region’s history. They fight over the sweet’s origins and even that of the word baklava (or baklawa in Arabic).

The battles over the origin of foods have forced countries to rewrite aspects of their histories and major companies to review the way they market products. Food also serves as a barometer of the influence of regional powers.

Iranian dates flooding Iraqi markets suggest that Iran is winning its proxy war with Saudi Arabia, another major grower, in Iraq, the world’s biggest producer of the fruit prior to the country’s multiple conflicts dating back to the Iran-Iraq War in the 1980s.

Iranian domination of the market symbolizes the Islamic Republic’s massive inroads into Iraq, ranging from the fact that it is the country’s foremost trading partner to its political influence in Baghdad and military sway exemplified by Iraq’s powerful Shia militias. Saudi Arabia, which only recently switched from effectively boycotting Iraq to forging political, economic, and cultural links, is playing catch-up. The kingdom garnered a degree of soft power on the soccer pitch and has plans to invest in Iraqi sectors like petrochemicals, energy and agriculture.

The more than a decade-long Israel-Lebanon hummus wars are both a struggle to claim whose food it is, counter-perceived Israeli attempts to colonize Palestinian and Levantine culture, and an effort to make an international mark though securing a place in the Guinness Book of Records by competing for the title of having made the largest pile of the chickpea dip. Hummus symbolizes “all the tension in the Middle East,” says Israeli food journalist Ronit Vered.

The war kicked into high gear with Lebanon, home to Middle Eastern haute cuisine, producing a 4,532-pound plate in 2009 prepared by 250 Lebanese sous-chefs and their 50 instructors. The aim was to deprive Israel of its earlier record engineered by Sabra, an Israeli hummus producer. That same year, Lebanon also made its mark with a 223-kilogram kibbeh, a cylindrical, cone-shaped dish made of cracked wheat, minced onions, finely ground lean beef, lamb, goat or camel and spiced with cinnamon, nutmeg, clove and allspice.

“We were not trying to prove something, but to remind people that we should take the international market more seriously. [In the US,] if you question that hummus is Israeli, you’re an outcast, but hummus existed long before Israel,” said then-Lebanese Tourism Minister Fadi Aboud.

In a reflection of the complexity of Middle Eastern disputes and a hint toward hummus’ Arab origins, it was an Israeli-Palestinian, Jawdat Ibrahim, not an Israeli Jew who took up the Lebanese challenge. Ibrahim, the owner of a popular restaurant in Abu Ghosh, months later cooked up a 4,090-kilogram hummus that was served in a satellite dish. “It was [a] big issue ­­that hummus was Lebanese. I said, ‘No, hummus is for everybody.’ I hold a meeting in the village and I say, ‘We are going to break Guinness Book of World Record.’ Not the Israeli government, the people of Abu Gosh,” Ibrahim said. More recently, Ibrahim has come under fire for charging a Chinese party of eight $4,400 for a meal that included hummus.

Your stuffed grape leaves are dolma from Iraq, your hummus is from Lebanon, your eggplant dip is baba ghanouj from Palestine, and your tabouli is from Syria.

Middle Eastern Jews immigrated to Israel & brought their culture with them. There is no Israeli culture. https://t.co/iufzxWLtY7

Food battles do not stop at the borders of Africa and Asia. They extend into Europe and impact projections of national heritage and commerce. In March, Virgin Atlantic felt obliged to drop classification of a salad on its in-flight menu as Palestinian, even though it was based on a Palestinian recipe, after pro-Israel passengers protested and threatened to boycott the airline. The airline opted for the more generic name, Couscous Salad.

“Our salad is made using a mix of maftoul [traditional Palestinian couscous] and couscous, which is complemented by tomatoes and cucumber which really helps lift the salad from a visual perspective and is seasoned with a parsley, mint and lemon vinaigrette. However, we always want to do the right thing for our customers and as a result of feedback, we have renamed this menu item from our food offering at the end of last year and we’re extremely sorry for any offense caused,” said a spokesperson for Virgin Atlantic.

Palestinian cookbook writer Christiane Dabdoub Nasser quipped: “Maftoul is Palestinian, just like pasties are Cornish and pâté de foie gras is French. No one can deny that and yet the airline, to add insult to injury, apologizes for the offense that the mention of Palestinian maftoul might have caused.”

“This is cultural genocide. It’s not Israeli food. It’s Arab (Lebanese, Palestinian, Syrian, Jordanian). First the Israelis take the land and ethnically cleanse it of Arabs. Now they take their food and culture and claim it’s theirs too! Shame,” tweeted prominent Arab American James Zogby.

In 2015, British supermarket chain Waitrose took a hit when it distributed a magazine entitled “Taste of Israel” that featured tahini, zaatar and other dishes that, like Ray’s foods, originate in pre-Israel Arab lands across the Levant.

Similarly, Sweden recently conceded that meatballs, long celebrated as one the internationally best-known icons of traditional Swedish cuisine, were in fact an Ottoman import. Sweden’s official Twitter account, featuring Swedish multi-national Ikea’s rendering of the dish, admitted that Swedish King Charles XII had brought the recipe from Turkey in the early 18th century when returned from five years in exile. “Let’s stick to the facts!” Sweden said. Swedish food historians and gourmets had already accepted that Kaldolmens Day or Cabbage Roll Day, which commemorates the death of King Charles, celebrates another dish that he discovered while dwelling among the Ottomans.

Refuting Sweden’s claim was easy compared to battles over baklava, whose history dating to the eighth century BC Assyria tells the story of shifting regional power, changing tastes and the communality of food that can prove to be equally divisive. Turks, Arabs, Jews, Greeks, Armenians and Iranians all contributed to baklava as we know it, yet they are reticent to acknowledge the sweet as a regional rather than a national dish. Greek seamen and merchants brought it to Athens where cooks introduced a malleable, thin leaf dough to replace the Assyrian rough, bread-like mixture of mixture of flour and liquid. Armenians added cinnamon and cloves, while Arabs introduced rose and orange blossom water. Iranians invented baklava’s diamond-shape and perfected it with a nut stuffing perfumed with jasmine.

Ebtisam Masto is a refugee who fled war-torn Syria with her six children to Beirut where she joined a cooking program in an effort to rebuild her life. Summing up the region’s battle of the palates, she says, “Food is a way to preserve history and culture, to pass traditions on to the next generation so that they can understand their origins and identity. If we don’t preserve [food] and teach it to them, it will disappear. It is our duty to keep it going.” 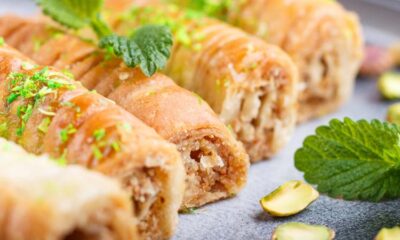 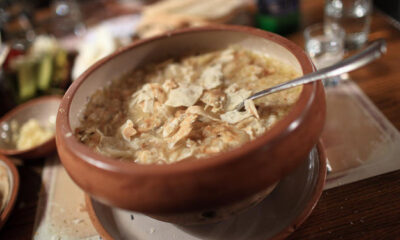