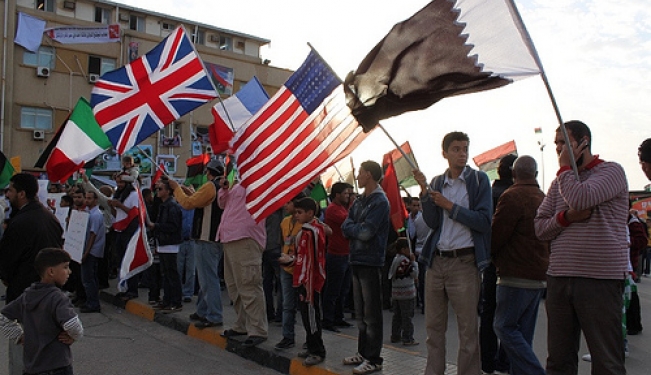 A critical reply to Philippe Nassif’s “smart power” view of the West’s response to the Arab spring.

The Arab Spring is truly one of the most complex challenges since the end of the Cold War. Like the collapse of the Soviet Union, it has caught the West by surprise. But whereas the West had a good sense of which side they were on in the Cold War, they have lost their moral compass in the Arab Spring.

Instead of siding with the people of Tunisia and Egypt, who rose up to fight for more freedom and the chance to improve their quality of life, the West stood with their dictators. France, who was at forefront of driving the military intervention in Libya, had a particularly woeful record during the beginning of the Arab Spring, with Foreign Minister Alliot-Marie even suggesting that French police armed with teargas be sent over to Tunisia to help crush the uprising. This is to not even mention the compliant and even supportive foreign policies of many Western nations before the Arab Spring, when many leaders actively made agreements with the region’s dictators.

When the West finally decided to position itself on the side of those protestors – some might call it a sad attempt to get on the right side of history – the popular revolutions of Tunisia and Egypt had already disposed of their dictators. The biggest sin committed by the West was not that they didn’t initially help Tunisians and Egyptians militarily, but that they publicly leapt to the defense of their dictators. And while many could be heard voicing concerns about the possible outcome, whether it be a fear of instability or a rise of Islamists, too few made the case for the rights of peoples’ self-determination – clearly demonstrating a case of a broken moral compass.

For Fair Observer contributor Philippe Nassif, the intervention represents the West’s willingness to stop a massacre and its love of democracy and freedom, as well as a case in point for the application of smart power. For others that choose not to ignore even the nearest past, the West was unable to simply endorse truly popular revolutions in Tunisia and Egypt but rather chose to militarily intervene in a civil war, (in countries rich in oil and gas reserves) which is still ongoing after nine months of fighting. In the Arab world, where conspiracy theories are ripe and mistrust of the US and Europe common, one should not bet on the West receiving the benefit of the doubt.

In addition, Libya is no example of the application of Nye’s smart power, but rather quite the opposite: it was and is an application of hard power. Freezing the regime’s accounts and carrying out airstrikes are clearly nothing but examples of hard power. Furthermore, the leaders of the Libyan rebels didn’t need to be attracted to the cause of disposing of Gaddafi and obtaining a very good shot at grabbing power, nor in fact did the Libyan people need to be attracted to better economic management of their country or a greater say in how to run it. In fact, they carried that interest long before the West claimed to. With the West’s position on Tunisia, Egypt, or Syria, it would even be legitimate to question whether the West’s real interest was to create a civil war over these issues or whether it was to ensure stability under a dictator. If the latter is true, the West was neither on the side of Gaddafi nor the rebels at the outset of the conflict, but rather chose to side with those who would give them a chance to re-interpret their position and role in the Arab Spring, while also disposing of the nuisance Gaddafi posed.

A more precise takeaway of the Arab Spring would be to recognize that the West choked massively when presented with the choice of backing truly popular revolutions, and in doing so showed its true colors. It spouted endless speeches about freedom and democracy but was only willing to back a movement when its own immediate economic and strategic interests were clearly determined.

A young Egyptian protestor that recently appeared on CNN’s Global Public Square put it best: “The problem is when I come to see the United States and their foreign policy, this is the same regime that supported Mubarak for the last 30 years. This is the same regime that up to this day has not spoken one word about Saudi Arabia, simply because they are worried about whether or not gas prices are going to go up tomorrow.”

If the West is confused about the values it puts first, no one will follow them, and the soft power element in smart power just stops existing. The true lesson we can learn from Nye is that soft power relies on values that are attractive and consistently practiced, on inclusive and legitimate policies, and on a clear vision of the future that attracts others. The West would benefit from listening to Nye and would do well to fix its moral compass to regain soft power. The West's different positions on Palestine statehood certainly haven't helped in that regard.