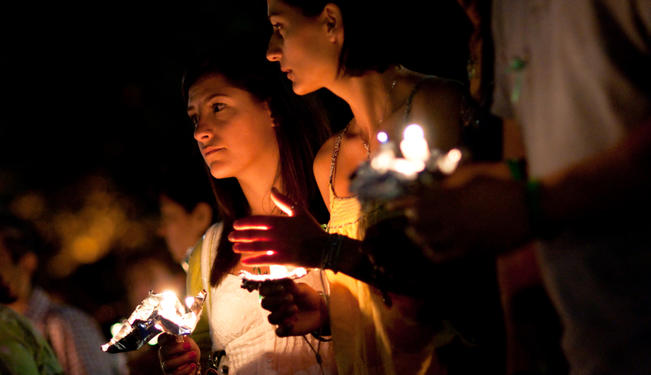 By disqualifying former President Rafsanjani from Iran’s presidential election, the Guardian Council may have helped to unite the split Green Movement. In order to become a broad-based opposition, however, the movement needs to overcome multiple obstacles and go beyond the scope it had in 2009.

On May 22, 2013 the Guardian Council presented the list of approved candidates for the June 14 Iranian Presidential Election; a list that only included the supreme leader’s closest men. Some members of the Green Movement had hoped that former President Akbar Hashemi Rafsanjani would be among the approved candidates, while others had already announced their intention to boycott the vote. By disqualifying Rafsanjani’s candidacy, the Guardian Council may unintentionally have helped to unite these two factions. However, the short-term impact of this is limited, as the obstacles of the movement are plenty. To understand where it stands today, we need to look back at the birth of the movement, the failure to spread the protests in 2009, and the special characteristics of the Iranian public scene as compared to a country like Egypt, which experienced a regime change in 2011.

The Green Movement: Then and Now

The 2009 Iranian Presidential Election gave birth to a Green Movement of middle-class youth. The movement was initially formed around the candidacy of the reformist presidential hopeful, Mir Hossein Mousavi. After the election, when sitting President Mahmoud Ahmadinejad was surprisingly presented as the winner, it turned into a protest movement when it took to the streets to oppose what it believed to be a fraudulent vote. As in Egypt, coordinators of the protests used online media tools (Facebook, Twitter, blogs) and cell phones, as well as more traditional methods such as graffiti, to mobilize the population. Soon, the streets of Tehran were filled with people who asked: “Where is my vote?” However, despite large demonstrations in the capital, the protests did not gain momentum in more distant parts of the country, and slowly the regime subdued the protests.

One reason for the failure of the Green Movement to gain country-wide momentum was its focus on middle-class Persian youth. The movement did not only fail to incorporate the working class, it also failed in reaching out to Iran’s minority populations. In a country where 39% of the population is considered to be a member of an ethnic minority group, compared to 0.4% in Egypt, this must be considered a major short-coming of the movement. As a Baluch man put it during my recent visit to the south-eastern province of Sistan-Baluchistan: “As fellow human beings, we felt bad when we heard of protesters being killed on the streets of Tehran in 2009, but we did not protest – it was not about us and that is why we did not participate.”

Another factor is the relatively recent Iranian Revolution carried out in 1979. The leaders of this revolution are still in power in Iran and, in contrast to Egypt’s Hosni Mubarak, they have hands-on experience and knowledge with regards to organizing a social uprising. They are well aware of not only the importance of splitting the opposition along ethnic lines, but also of subduing its leadership and cutting of its communication channels. Today, many of the organizers of the 2009 protesters are either in jail or in exile, Mousavi and his wife Zahra Rahnavard are under house arrest, and the censoring of internet, satellite-TV, and cell-phone use is stricter than ever. In pre-revolutionary Egypt, the media landscape had somewhat opened up since Mubarak’s first decade in power in the 1980s.

The above factors have led to that the Green Movement today mainly consists of a group of loosely organized middle-class youth in northern Tehran. People who self-identify with the movement admit that they do not see any distinct leader among them, or as a 24-year-old movement member expressed in May 2013: “Most leading political activists live outside the country.” Another member expresses her belief that the leadership of the movement can be found within each of its members. While ideologically appealing, this creates problems with regards to the prospect of the movement leading a social mobilization of the Iranian population, as it reduces the likelihood of spreading the movement beyond its limited ethnic, class, and geographical scope.

However, widening the movement is not an impossible task, as, despite their differences, the populations in northern Tehran and, for example, Sistan-Baluchistan share many views and hopes for a future Iran: they want a government that focuses on the needs of the people and a vibrant civil society that engages and informs the population about their rights. The main problem at this stage is the lack of communication between different groups, and knowledge about the opinions of the other groups — which is a conscious strategy by the regime. Yet, it is not only the regime that is to blame for this. Western-based satellite TV channels such as BBC Persian, which reaches many Iranian households despite the ban against satellite TV, tend to oversimplify the complexity of the situation by focusing its broadcastings on the Persian majority in general and the exile community in particular. Social media tools such as Facebook are used by some, but far from all, as it requires a certain level of technical expertise to circumvent the ban put on by the government, which uses technology bought from the West to censor both internet and cellphone use.

In the end, while the regime has weakened the Green Movement temporarily, the long-term possibility of a more broad-based opposition movement exists in the country. The disqualification of Rafsanjani and the unlikelihood of any other candidate receiving support from the movement, indicates that this, in contrast to the creation of the Green Movement, will have to take place outside of the official political framework. The role of the West is not only to further consider how its technology is used for unintended purposes and the potential of Western based satellite TV, but also to realize the detrimental effect the economic sanctions have on the lives of the Iranian people and their possibility to engage in social and political activities. Engagement in these activities, however, is crucial as it is the only way to counter the regime’s continued attempts to further break down the social cohesion of the country.

The question now is if the disqualification of Rafsanjani will contribute to increasing the cohesion within the limited, yet important, sphere of the Green Movement and if the movement will be able to expand and become a broad-based opposition movement.

*[Note: The views expressed are solely those of the author and do not represent her employer or academic affiliation.]