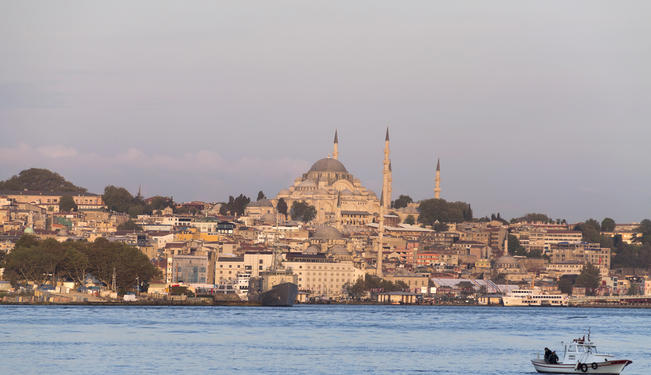 The Iran deal could be a window of opportunity for Turkey.

Amid the hubbub of excited chatter surrounding the initial six-month deal signed between Iran and the P5+1 over Tehran's nuclear program, it is worth casting our minds back to an earlier age.

Indeed, May 17, 2010, seems like another world now, especially in a Middle East geopolitical landscape that has shifted with incredible speed. That was the date when Turkey and Brazil — two rising powers who had both stepped out from behind the US’ shadow — dared to sign a joint declaration with Iran on a deal to swap nuclear fuel as a possible solution to the intractable Iranian nuclear row.

Both Turkey and Brazil were cold-shouldered for their eager impertinence. Even though the deal was based on an October 2009 agreement struck in Vienna between Iran, the US, Russia, France, and the International Atomic Energy Agency (IAEA), it was still the work of smaller regional powers who were presuming to influence world events. The cold-shouldering let Turkey and Brazil know that big deals are for big boys, and that their job as regional players was to react, not to lead.

Fast forward to November 24, 2013, and Turkey finds itself in a reactive role once again. With news of the interim nuclear deal, Turkish stocks leapt to three-week highs and the lira rose by 0.5% with the ensuing drop in oil prices and optimism for potentially greater regional stability.

While this may be good news, it also highlights how far Turkey has slipped from leading the curve in the Middle East. Throughout the 2000s, Turkey’s standing in the Middle East was catapulted by its newly assertive, soft power policies of "zero problems with neighbors" and "strategic depth" to that of a regional, cultural, political, and economic poster boy. It was the country every state in the Muslim world wanted to be like.

An annual poll of Arab public opinion conducted by the University of Maryland with Zogby International, revealed the stunning ascent of Prime Minister Recep Tayyip Erdoğan from a regionally unknown politician to the most inspiring world leader in the minds of the Arab public. This was an example of serious soft power — and it was democratic, yet Islamic.

Then came the uprisings. Revolutions spawned counter-revolutions in a messy brawl for control over an economically crippled, yet pivotal region of the world. Turkey — led by its charismatic leader, Erdoğan — was politically hardwired to ride with cavalier gusto into the heat of the battle.

Uprisings calling for democracy in a region long regarded as the last bastion of the strongman dictator, were always going to cause trouble. Turkey’s elite, with the important assistance of close US military ties, had maintained an undemocratic police state for much of the 20th century.

Yet to its credit, Turkey steered a path out of military rule into a democratic landscape that had the inevitable result of empowering the voting public. The country's more conservative, more religiously observant masses re-elected the Justice and Development Party (AKP) three times.

Given the chance, the public did the same in Egypt and Tunisia, pointedly rejecting the representatives of the established elite. In Egypt, this resulted in the 2012 victory of Mohammed Morsi of the Muslim Brotherhood over Ahmed Shafiq, a senior Air Force commander who had previously served as prime minister under the deposed dictator, Hosni Mubarak. This not only shocked elites with a sense of entitlement, but was also a euphoric moment of power for a class used to repression and powerlessness. The initial results have been predictably rocky.

Presented with the prospect of the democratic removal of their inherited power, the old guard has naturally pushed back. Rather than wait for the Muslim Brotherhood to make their own mistakes in governing a state, the military elite swept them from power in Egypt, backed by the royalist forces of Saudi Arabia and the Gulf.

The Gulf states have also clamped down heavily on Muslim Brotherhood activity and its calls for democratization in the Gulf. Meanwhile, what began as a pro-democracy movement in Syria was successfully transformed by the Assad regime into an armed and increasingly sectarian conflict. The Syrian Civil War has pulled in regional and international powers with their own agendas.

For Turkey, the result of all these developments is a bewildering loss of cohesion in its own foreign policy, and a resulting slump in its regional prestige.

More than any other regional state, the interaction of the various crises in the Middle East has resulted in a fragmentation of Turkey’s foreign policy. Firstly, the AKP rightly viewed the fall of dictatorships in Tunisia, Egypt and Libya as a historic opportunity for not only democracy, but also the mildly Islamist brand of democracy which they were elected upon in Turkey.

However, events did not turn out as Turkey might have wished. Perhaps most uncomfortably, Ankara did not influence its perceived friends as expected. Erdoğan’s triumphant visit to Cairo in September 2011 was meant to cement his role as a regional trendsetter. Instead, the trip revealed the divergence between his political vision and that of the Muslim Brothers.

Nevertheless, Turkish support for the Morsi government remained strong, and his removal by the Egyptian military was met with Turkish fury. The rise of the Muslim Brotherhood was deeply opposed by the Gulf monarchies and Israel, and distrusted by Iran. The push back by the establishment in Egypt — and to a lesser extent Tunisia — left Turkish support for the revolutions at odds with Saudi Arabia, the other key Sunni power in the region. And why is the Sunni nature of their power so important? Take a look at Syria.

In Syria, the Sunni-Shi’a conflict that had already erupted in Iraq, and which is fuelled by Iranian-Saudi geopolitical rivalry, has taken center stage. The entrance of the Hezbollah Shi’a militia means Turkish support for the armed opposition now appears to be a Sunni stance, rather than simply a Turkish one.

Though the pro-Sunni position of Saudi Arabia and Turkey might be thought to have created shared interests, their opposing visions for the wider region have undermined cooperation. Turkey’s regional stance was far closer aligned to that of Qatar, the Gulf state which did so much to support the revolutions and the Muslim Brotherhood until the abdication of the assertive Sheikh Hamad al-Thani and Qatar’s subsequent diplomatic retreat.

Consequently, Turkey is at odds not only with Saudi Arabia and Egypt’s new regime, but also with Iran over Syria. To pop the cherry on the top, Turkish-Israeli relations had already soured in the late 2000s as Erdoğan became the most popular voice of the Muslim Middle East, while being a staunch critic of Israeli policy in Gaza. The result is Turkish non-alignment with any of the major powers in the region.

Jam for the Donut?

By a curious twist of circumstances, we find a region where — aside from the recent Egyptian vassalage to Saudi oil dollars — perhaps one of the most closely aligned foreign policy perspectives are those of Israel and Saudi Arabia, two very strange bedfellows indeed. Both are anti-Brotherhoodl; both are anti-Iranian; and both are increasingly anti-Turkish policy.

Where in this polarized mess can Turkey turn now? Is there any way of becoming the regional jam in an otherwise hollow geopolitical donut? With so much clear space in the center ground of Middle Eastern politics, small movements could have profound effects for Turkey.

The potential for a thaw with Iran is not only presented by the nuclear deal, and the ensuing upturn in bilateral trade, but also by working in tandem on Syria. Despite backing opposing sides in the civil war, Iranian and Turkish Foreign Ministers Mohammad Zarif and Ahmet Davutoğlu held a joint press conference in Tehran on November 27, at which they called for a ceasefire to precede planned Geneva peace talks in January. With the new government of President Hassan Rouhani, Iran is likely to be far more willing to join Turkey in treading a moderate diplomatic line.

Yet while there may be competition between Iran and Turkey for the moderate middle ground, other regional rivals may be checked for the time. Israeli and Saudi antipathy towards Iran has so far forced them onto the diplomatic fringes of the region’s most pressing crises. Egypt’s turmoil makes it hard to envisage a moderate regime emerging there anytime soon.

As the political and security situation in the Middle East has deteriorated, Turkey’s standing has appeared on the surface to collapse as well. Yet such a judgment is misleading. Many years of earnest soft power cultivation does not count for nothing. Though the Turkish government may have stumbled, Turkey itself still offers one of the region’s most successful models for the future.

In both cultural and economic terms, Turkey’s power and influence in the Middle East is still on the rise, and this compels its politicians to seek compromise for Turkey’s own benefit. Paradoxically, as the region appears to reach a nadir, Turkey may find that it is better placed than others to turn the charm offensive back on.