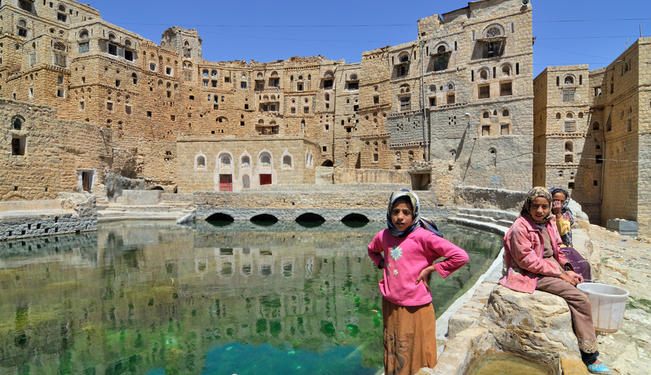 Two female filmmakers from Yemen and Saudi Arabia are using film to fight for change.

In the midst of a nascent film industry, a handful of female filmmakers have emerged in the Arabian Peninsula, pioneering film in the region and using it as a tool to fight for change. Saudi Arabia and Yemen both present volatile environments for any director; in the former, cinemas are illegal, and in both, authorization from the government prior to shooting is obligatory. However, in these conservative, patriarchal societies, the challenges for female filmmakers are even greater.

As Yemeni documentary filmmaker Khadija Al-Salami was witnessing the 2011 revolution against the now-ousted president, Ali Abdullah Saleh, on television, the presence of women amongst the crowds of protesters came as a shock. Segregated from men in many areas of public life, their boldness inspired her to leave her diplomatic job at the Yemeni Embassy in Paris and document the movement. "For me, this was a true revolution – all this oppression had been lingering for so long," Al-Salami says. "To see these women uncovered and not shy of the camera was unbelievable. They just wanted to be a part of this; they were just saying 'we exist.'"

The Women of Yemen’s Revolution

Al-Salami’s 2012 documentary, “The Scream,” follows the women of that revolution. Originally in search of Nobel Peace Prize winner Tawakkol Karman – the human rights activist considered the "mother" of the Yemeni revolution – Al-Salami came across thousands of other women fighting not just for the collapse of the regime, but also for their place in society. Accordingly, Al-Salami followed journalist Rahma Hugira, human rights activist Balqis Al-Lahabi, and poet Huda Al-Attas, all of whom were fighting for the liberation of Yemen. "The presence of women in the revolution is a message," says one of the women in the documentary. "I want to be present, and my presence will be prolonged throughout and beyond the revolution."

In “The Scream,” Al-Salami explores how much has actually changed for women in post-revolution Yemen; barely anything seems to be the general consensus. "There’s change, but there are still a lot of restrictions and oppression from families," says Al-Salami. "I now see thousands of girls that have awareness of their rights. They have to keep their courage and continue to fight for change."

The tradition of child marriage in Yemen presents a hotly debated topic with respect to the situation of women therein. According to a 2012 UNFPA report, 32% of 20-24 year-old Yemeni women in 2011 were previously married under legal age. In Al-Salami’s adaption of "I Am Nujood," the memoir of a ten-year-old Yemeni girl married to a man 20 years her senior is the focus of the film – a fact made more poignant by Al-Salami’s own story. Married at 11 and disowned by the male side of her family after fighting for divorce, she had to juggle a job at her local television station with school to support herself and her mother.

Desperate to leave Yemen to study abroad after being exposed to the outside world through her job at the station, Al-Salami was awarded a scholarship at 16, and left shortly afterwards for the United States. Now based in Paris, her documentary work has been almost entirely dedicated to highlighting the plight of Yemeni women. "Since I was a kid [I’ve been], fighting for my rights," she remarks. "I fulfilled my dream in liberating myself, but I needed to go back to try and help these women." With the illiteracy rate among women in Yemen currently at around 70%, Al-Salami set up the My Future Foundation in Sana’a, which helps provide young girls with an education. "My grandmother used to say a girl was only born to be buried or married. She and my mother never went to school, and I decided to go back and fight for that."

Working within an almost nonexistent film industry is not without its challenges, but filming in a country where one cannot freely express themselves also involves courage and persistence. Nobody believed Al-Salami would get the go-ahead to film a female prisoner inside a cell for her 2006 film, "Amina." However, the director not only received permission to interview the woman who was given a death sentence at 14, but was also able to temporarily live with her in her cell. At other times, her filming was suspended by the authorities, and she risked the penalties of illegally filming in the street with hidden cameras.

For Saudi Arabia’s first female director, Haifaa Al-Mansour, getting authorization to shoot her film, “Wadjda” – the first feature film short entirely in the country – was not so much a problem as filming within a conservative society. Her 2012 film, recently released in European cinemas, follows Wadjda, a rebellious ten-year-old girl, who challenges her country’s rigid laws in a quest to purchase a bicycle and race against her friend, Abdullah; not exactly a thrilling subject for Hollywood’s standards, but in Saudi Arabia, it is the stuff of revolution. Filmed in Riyadh, Al-Mansour had to direct her actors via walkie-talkies from the back of a van in the city’s more conservative areas.

Al-Mansour’s realist drama highlights the marginalization of women in Saudi society through the character of Converse-clad Wadjda. Though the director plays it safe in the subtlety with which she tackles the subject of women’s rights, the more trying aspects of the situation of women in Saudi Arabia are clearly highlighted throughout the film, in which the desert surroundings under a stifling blue sky are devoid of any trace of womanhood. As Al-Mansour’s film provides a rare glimpse into a relatively insular and misunderstood society, it’s no wonder why “Wadjda” has received so much international attention since its release.

A co-production between Saudi Arabia and Germany, Al-Mansour’s real challenge came in finding a young actress to play the leading role. "A lot of parents don’t want to have their girls appear in cinema," says Al-Mansour. "We had many girls come to casting, and then at the last minute, they would disappear." Waad Mohammed came to casting only one week before the movie was set to be shot. "She was wearing jeans and an 80s-style jacket with loose curly hair, listening to Justin Bieber. It was exactly this global youth culture I wanted to capture."

Though many restrictions remain in place for women in the kingdom, progress, some might say, has been made there in the last few years: female athletes competed in last year’s Olympic Games, and women were appointed to the government’s advisory council last January. "[Those among] the new generation in Saudi are different," Al-Mansour says. "They have access to information and the Internet, and want to live like everybody else." However, real change for Al-Mansour will come only from the bottom up. "It’s not about making one big change; it’s about breaking it down and making it more tangible for our own lives."

Both Al-Salami and Al-Mansour are confident about cinema’s role and ability with respect to social reform. Though Yemeni intellectuals initially predicted a violent public reaction to Al-Salami’s “Amina,” screenings in rural areas of the country were received in a positive light. "After that film," remarks Al-Salami, "journalists were encouraged to tackle subjects they considered sensitive. Expose your problems, and you’re forced to find a solution."

Al-Mansour is also hopeful that the wheels of change are slowly being set in motion. "There’s a debate going on now about cinema," she says, hoping a national dialogue will bring new opportunities for herself and others. "For women, sharing something [about yourself] was considered ayb (wrongdoing)," says Al-Salami. "Now, you see how eager they are to express themselves." Al-Mansour, while optimistic, is more of a realist. "Cinema is a tough place to be. There is no funding, no system." The solution? "You need to be individual [and] persistent, find your voice, and carry on."

*[This article was originally published by ReOrient.]