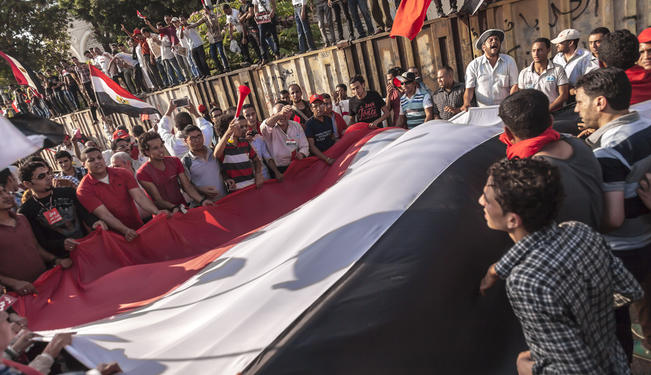 The political leadership representing pro- and anti-Morsi supporters are not willing or able to meet public demand.

Bassem Youssef is the kind of Egyptian that people in the west can relate to. He was feted in western media as a cause celebre for freedom of speech after an arrest warrant was issued against him during March, in the wake of numerous libel suits brought against him by members of the public (initially beginning from one of his own work colleagues) and culminating in a charge that he insulted the president and Islam on his popular television program, “El Bernameg” – an Egyptian version of the Daily Show. His final show, filmed and broadcast before the huge demonstrations in Egypt which resulted in the military coup on July 3, was almost entirely a mockfest of then President Mohammed Morsi and his supporters, with little criticism of its opposition. Listed as one of the world’s top 100 influential personalities by Time magazine earlier this year, he has been credited with helping turn public opinion against the Muslim Brotherhood and their allies.

After the coup which removed Morsi, a number of media channels were immediately closed down under the justification that they were inciting violence, including the branch of Al-Jazeera Egypt, along with numerous other satellite stations with a connection to Islamic movements and personalities. Given his own recent history and liberal politics, it might be considered surprising that Youssef was supportive of the media clampdown, which included the arrests of several employees of the various stations, despite it being carried out by the military with no due process.

His public pronouncements on Twitter (where he has more than 1.7 million followers) since July 3, include the following: “The MB regime was about to close down channels and target media and politicians” (it should be noted that the vast majority of independent Egyptian satellite channels are funded by secular and liberal opposition); “Instead of writing numerous tweets[,] here's one to sum it all up[:] MB are the new form of Nazis[.] Got it? I said it on the show and saying it now;” and on July 5 that, “MB leadership sending its youths to die at army HQs to victimize themselves against the world. Blood for publicity. Cheap. #not_a_coup.” Having indulged in both apologism and victim-blaming, he made no comment other than “Kifaya” (enough), after the killing of more than 50 protestors in front of the Republican Guard headquarters, who were gunned down by the army on the morning of July 7.

While Youssef was extremely vocal against what he considered attempts to silence him by the Morsi presidency, as well as some of the inflammatory rhetoric emanating from the pro-Morsi camp, he appears to have no public stance against either the independent media clampdown or the killing of protesters. This liberal hypocrisy summed up in the stance taken by Bassem Youssef is one of the most characteristic features of the political events in Egypt at the moment, from both within and outside.

First and foremost, among the liberal hypocrites would be Mohammad el-Baradei, the Nobel prize winning former IAEA inspector. In an interview with CNN on July 4, he claimed that the removal of the president by the military was not a coup but rather the equivalent of a recall (with the recalled candidate and close associates since being held incommunicado by the military), supported the closure of independent media as a necessary step for the immediate future, and made no comment other than “violence begets violence” after the killing of those protesting the continued imprisonment of their “recalled” candidate. Given his previous statement that he had, “emphasized to all the security authorities here that everything has to be done in due process,” and that “I would be the first one to shout loud and clearly if I see any sign of regression in terms of democracy,” his response could generously be described as underwhelming.

His political party, the National Salvation Front, issued a statement which condemned “all acts of violence,” including assaults on military barracks and army officers – a nod to the acceptance of the military’s narrative that the killings were, in fact, the result of “a terrorist group” trying to storm the building (an assertion not backed by any witness statements, but accepted without question at the eerily Mubarak-era style press conference held after the event). This, at least, was somewhat better than the response of the leftist former presidential candidate, Hamdeen Sabahi, who stated that the only beneficiaries of the event were those who wanted to drive the country into civil war, and the Muslim Brotherhood.

While this hypocrisy has become ever more apparent as the events in Egypt unfold, a step back finds that the movement against the former president appears to be predicated on the same type of dishonesty. The Tamarrod campaign built popular support based upon a petition that complained about worsening security and economic conditions, along with prominent complaints that the country was “begging” the IMF for loans and continuing to “follow in the footsteps” of America.

Though there is room for debate as to how much responsibility the Morsi government had, given the lack of real control over state institutions and the hangover of more than 60 years of dictatorship, these are all valid grievances that are justification for widespread discontent and demonstrations. The same points were continuously raised by the spokesperson for the campaign, a young Nasiri activist called Mahmoud Badry, who consistently complained how the country was a “prisoner” to the IMF, an organisation that only wanted ill for the country. He demanded an independent Egypt – the Egypt of Gamal Abdul Nasser (an apt allusion given that he was the first Egyptian dictator to move decisively and harshly against the Muslim Brotherhood in the early 1950s).

And yet, Tamarrod’s candidate for prime minister was none other than el-Baradei, a supporter of private enterprise and a believer in the austerity that Egypt would have to implement to pay for the IMF loan, a position he has consistently maintained. He is also hardly a figure who would take Egypt away from its position as a close US ally, spending time on the phone with Secretary of State John Kerry the day before the coup took place, apparently in order to convince him of its necessity. A man with little street support in Egypt, he polled in single figures at the time of the presidential elections, and is widely seen as a favourite of the western media. Whether el-Baradei is manipulating Tamarrod, or Tamarrod is manipulating el-Baradei, or they are both manipulating the public, is up for discussion. But what is clear, is that the grievances and demands that gathered the people in Tahrir Square appear to have little to do with the machinations taking place.

This hypocrisy is not limited to liberal Egypt, with the statements from the EU, Britain and the United States in the wake of the coup effectively accepting the events without much reserve. The Obama administration’s refusal to use the word “coup”, due to the financial aid implications involved, is further testimony to lack of principle on all sides. Details have since emerged in the American media of the extent of the government’s knowledge and support of the moves by the Egyptian army in the week leading to the formal removal of Morsi. And while both pro- and anti-Morsi supporters are united in their desire to see Egypt take an independent path, the political leaderships ostensibly representing the two sides clearly rely upon the patronage of the United States, evidence of its continuing hegemony over the politics of the country, and the fact that no one is willing or able to meet public demand.

Slipping Back into the Mubarak Era

It appears in the immediate aftermath of events that the side that has benefited the most is the military and other remnants of the previous regime. Adly Mansour, the current president installed by the military, was previously the head of the constitutional court, and headed the constitutional hearings in 2012 that scrapped the “political isolation” law, which prohibited members of the old regime from contesting elections. The re-installed attorney general, Abdel Meguid Mahmoud, was previously removed by Morsi as a result of the acquittal of those accused of the “camel battle” episode, when Tahrir Square was stormed during the revolution of January 25. Since being re-installed, he has offered his resignation stating that he wanted “all of the public prosecution decisions to be free of any doubt or suspicion,” but not before he had issued more than 200 arrest warrants and travel bans for Muslim Brotherhood members. Along with these stalwarts of the previous regime, the hated police force has also taken the opportunity to rebuild its image as a “protector of the people”, a novel re-invention for one of the institutions whose widespread torture and abuse was one of the major grievances leading to the uprising against the Mubarak regime, back in 2011.

As Egypt slips back into the era of Mubarak, who was formerly a close ally of the west and seen as a strong bulwark against Islamic movements, the liberal elements cheer on from the sidelines. Unable to win any open election — presidential, parliamentary or otherwise — they are now riding into government on the back of tanks called out by popular demonstrations that were gathered upon a platform which they themselves do not agree wholeheartedly with, but were happy to co-opt. Variously applauding and assenting to the clampdown upon their opposition, as Bassem Youssef admitted in his own opinion piece written earlier this June — Egyptian liberals and secularists “have all become fascists”. While he contended that this occurred as a result of the Morsi presidency, the events of the last few days suggest that the problem lies deeper.

*[This article was originally published by openDemocracy.]