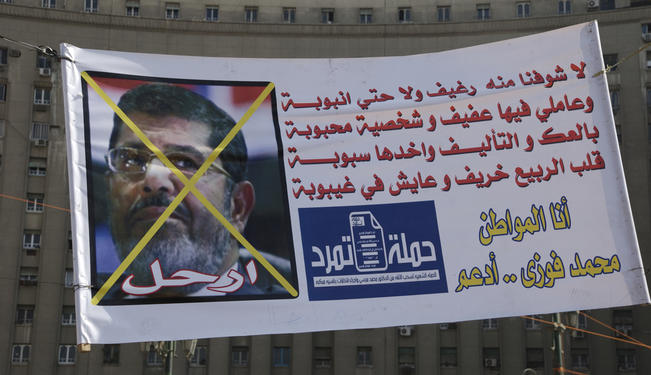 To analyze events in Egypt, the unjust legal or constitutional arrangement needs to be explored.

Several months ago, a group of young Egyptians began a petition to remove elected President Mohammed Morsi from office. This campaign culminated on June 30 in massive protests that raised the same demand: the immediate resignation of the democratically-elected president. The Egyptian armed forces, acting in coalition with numerous political, judicial, and spiritual leaders, imposed the will of those protesters on July 3 by installing the head of the Constitutional Court as an interim president.

The move was widely described in Western media as a coup d’état, and decried by several analysts as undemocratic and reminiscent of mob-rule. Sure enough, shar’iyyah (legality) is the one notion that was most heavily relied-upon by Morsi and his supporters in their attempts to resist the calls of the opposition. In Morsi's last speech before his ouster, he declared shar’iyyah to be a principle for the sake of which he was ready to sacrifice his life. Similarly, the Muslim Brotherhood's Freedom and Justice Party consistently referred to the pro-Morsi protesters and victims as pro-legality. This may seem like a self-evident claim given the fact that Morsi won a popular election, which appeared to be relatively free and fair by Egyptian standards. It is, however, necessary to unpack this concept of legality. What does it mean? And how does it coming into being?

Generally speaking, legality is understood as a moral obligation that falls upon the members of a given community to obey legal and constitutional norms in force in this community. In that sense, the Egyptian people would have a moral obligation to accept, and refrain from resisting, the rules of the 2011 interim constitution and its effects, including the election of Morsi.

We can already see that the object of this duty consists of several “layers” of rules: the rules that allow the existence of a legal system (or fundamental rules) and those that constitute the effects or substance of the legal system (or substantive rules). It is broadly accepted that, at the fundamental level, rules of legality are not, in themselves, legal. In other words, the validity of a constitutional or legal system often depends on fundamental extra-legal elements, such as justice, social peace, and popular acceptance.

But how does a system of rules come to generate this moral obligation of obedience? There are several answers to this question. A classic utilitarian answer would consist of saying that the rules issued by a legislator, who is habitually obeyed by his subjects and who is not in the habit of obeying anyone, generate an obligation of fidelity. A weaker form of this argument consists of saying that a system of rules widely recognized by citizens and government officials as sovereign imposes a principle of legality. Either way, tremendous conceptual and linguistic acrobatics would be needed to maintain this argument, for it to apply to the Egyptian case in any of its forms.

It is very difficult to see how the constitutional arrangements that started in March 2011, and led to the election of Morsi, generated any kind of habit of obedience or wide recognition among individuals and government officials. In fact, resistance to Morsi’s appointments of ministers and governors was quite commonplace in the months preceding his ouster.

The second type of justification of legality stems from fairness. Briefly put, this would amount to saying that the rules of a legal system ought to be obeyed to the extent that they are just and promote the best interests of the people.

This would probably be the weakest pro-Morsi argument and, sure enough, one that is not used by his party and followers. The constitutional design established after Hosni Mubarak’s ouster consisted of granting the power of forming a constitutional assembly to the first elected parliament; thus ensuring that the power balances within the parliament would condition the constitution-drafting process. This arrangement, as expected, deeply harmed the representativeness of the constitution-drafting process, leading to the alienation of significant segments of the Egyptian society, and numerous power struggles between the then-dominant Muslim Brotherhood and the judiciary authority.

It appears, therefore, that the strongest argument in support of Morsi’s claim of legality is stability and efficiency.

It is best, one would say, for the sake of constructing a functional system of governance, to accept the outcome of popular vote regardless of its implications. This argument need not rely on any fictional concept of popular will; a concept that would be easily dismissed. Rather, one would argue that, since every major political arrangement since Mubarak’s ouster was approved by at least the simple majority of voters in a popular vote, and since we have no better way of deciding on public matters in Egypt, then it would be efficient and responsible not to challenge any of those arrangements.

After analysis, therefore, Morsi’s claim of legality at the substantive level comes down to a plea to respect the principle of simple majority vote at the fundamental level. There is absolutely no reason why this principle should be viewed as unimportant.

It is a fact that millions of Egyptians stood in lines time and again to decide on public matters, and that almost everyone accepted the outcome of those votes immediately after they were cast. It is indeed a strong argument.

However, it is important to note that even the most dedicated advocates of the necessity to protect legal and constitutional arrangements from popular discontent, such as H.L.A. Hart, accept a right, and even a duty, to resist legal arrangements that are fundamentally unjust. Quite obviously, there does not seem to be an exact way to decide where the obligation to obey ends, and the right to resist begins.

Therefore, it seems that the question of Morsi’s shar’iyyah comes down to a tension between two principles:

The mistake of analysts attempting to fit those events into an abstract democratic model, is that they fail to see the possibility of coexistence of those two opposed principles, and give to the former much more weight than the Egyptian situation warrants. Egypt is a society undergoing deep revolutionary changes in which quasi-absolute uncertainty surrounds the future of the political system. The turmoil, to be clear, is fueled by the people’s struggle for dignity and justice, and not by a desire to abide by a procedural notion of democracy.

In those circumstances, it would be absurd to deny the people the right to resist constitutional arrangements that do not satisfy the demands for which the revolution erupted in January 2011. At the fundamental level, considerations of inclusiveness and conduciveness to social peace, appear much more crucial than the preservation of decisions made by a simple majority vote for the purposes of rehabilitation of a largely dysfunctional political-legal system. At the very least, any analysis that fails to take this right to resist an unjust constitutional arrangement into consideration is essentially inadequate.