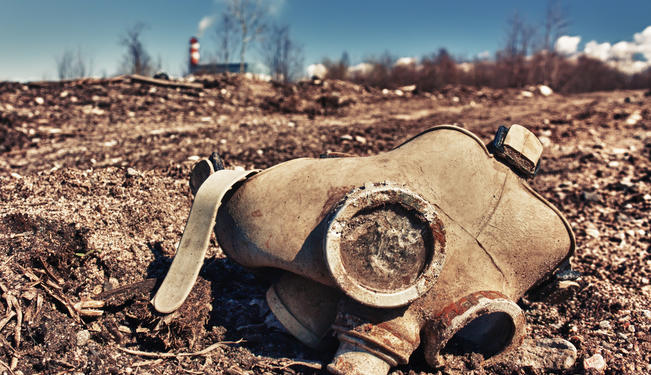 It is essential to assess what type of chemical weapon was used in Syria.

On August 21, 2013, reports of chemical weapons being used in Syria rocked the world, as it saw news footage of people suffering from what appeared to be the effects of a chemical attack. News reports filtered in from various news agencies along with film footage that could not be verified of people in obvious discomfort and later of dead corpses. It then transpired that the Syrian military was carrying out an operation in the Damascus suburb of Ghouta, where the reports of a gas attack were stemming from. However, the Syrian government denied that it had used any chemical weapons.

Not the First Time

This was not the first occasion that Syria had been accused of using chemical weapons on its own people. On March 19, 2013, in the village of Khan al-Assal in Aleppo, there were reports that the regime had used chemical weapons. Again, it strongly denied those reports and accused the rebels of carrying out the attack which they also denied. It was clear by the language that was used that there had been a chemical attack of sorts, but without independent verification, the accusations could be taken no further. Although samples from the area had allegedly been smuggled out to the UK and US — and while these samples did show that a chemical agent was used — it did not, or could not, determine by whom.

It may have been that the attack on March 19 was a test run to see how the world would have reacted should chemical weapons be used in the future. Admittedly, there was an outcry and few harsh words, but that was as far as it went. No further action followed. However, the attack on August 21 could prove to have been a step too far.

President Bashar al-Assad believes that the West will do nothing. He has even stated that the Americans are doomed to failure as they have done since the Vietnam War. However, the Syrian president fails to take into account that the US and its allies, for example the UK, have successfully launched military strikes/operations in the Bosnia, Kosovo, Iraq and Afghanistan conflicts. But, with United Nations inspectors in Syria when the latest attack came, everything changed as the world saw the suffering of innocent children and women.

The Syrian government is relying on its powerful allies — Russia, China and Iran — to keep the West away from carrying out any military action and getting involved in what is seen as a civil war. The United Nations are powerless to do anything because of the restrictions placed upon the mission to investigate the potential chemical weapons attack by the Syrian government. Damascus fears what happened in Iraq when shortly after UN inspectors left the country, coalition forces launched their attack on Saddam Hussein.

US and Western governments appear frightened of getting involved due to alleged false intelligence reports in the build-up to the Iraq War as well as public opinion. Moreover, it might be seen as interfering in Middle Eastern affairs once again. Another reason is the fear of a backlash from Islamist militants, which could strengthen their recruitment and lead to a much larger escalation in terrorist attacks on Syrian soil and abroad.

The international community agrees that chemical weapons were used. Even the new Iranian president, Hassan Rouhani, has said there was proof of use, but did not state by whom.

This would not be the first time that a dictator has used chemical weapons to attack his own people as Saddam Hussein had shown. The chemical bombardment on March 16, 1988, in the village of Halabja, approximately 150 miles north of the Iraqi capital, Baghdad, left thousands dead and was carried out by someone whose thinking was probably rooted in US diplomatic and material support for Iraq during the Iran-Iraq War.

The West is calling for some sort of action against Assad, but it will have to be careful in its response, as the Syrian government is unpredictable. There may also be retaliation from Iran whose deputy chief of staff of armed forces, Massoud Jazayeri, said: “America knows the limitation of the red line of the Syrian front and any crossing of Syria’s red line will have severe consequences.” Russian Foreign Minister Sergei Layrov also said that any such action would violate international law.

There are numerous types of chemical weapons available to various governments. The Syrian government is known to possess two, Mustard and Nerve. However, mustard gas has prominent signs and symptoms once used, while nerve agents are completely different.

Syrian officials have admitted to stocking chemical weapons and have stated that they would never use them against their own people. Syria's government has never signed the Chemical Weapons Convention, nor ratified the Biological and Toxic Weapons Convention. Thus, no one is quite sure what the country has in its armory.

Chemical weapons are used to kill and terrorize since its use gives no warning to those it is targeted at. A chemical weapon is a chemical substance which is intended for military operations to kill, seriously injure or incapacitate through its physiological effects. From this definition, chemical agents can be divided into three categories according to their military use: Incapacitating, Damaging and Lethal.

The agents fall into two categories: persistent and non persistent. Persistent agents are designed to contaminate the surface, producing a vapor hazard that, depending on conditions, has a variable life expectancy. It is used in a lot of cases to deny the area to the enemy as it is of a longer term nature – weathering takes much longer to take effect — and less manpower intensive; therefore, those on the offensive can redirect troops to other areas in the battlefield. These agents maximize and stretch the enemies’ medical facilities until a decontamination team arrives to clear up — unless the agent has disseminated or is left to disseminate on its own.

Non-persistent agents are designed to contaminate the air alone to cause casualties without contaminating the surface or surfaces. Often used during an attack to maximize casualties or prior to an attack to kill as many as possible, thus making it easier for the opposing force.

Forms of delivery are disseminating by means of vapor (gas) in aerosol, liquids or solids (powder). Means of delivery can be by bursting munitions (bombs), rockets, shells and mines or by means of aerial spray, such as aircraft or venting missiles.

Nerve agents are lethal agents, as they interfere with the nervous system and disrupt such functions as breathing and muscular coordination. They may be delivered in a persistent or non-persistent format. Routes of entry into the body can be from inhalation, absorption and ingestion. Normal clothing and bare skin are easily penetrated by liquid, whereas without any protection, vapor will be easily inhaled with death following quickly.

The signs and symptoms of a chemical agent on a victim include a running nose; an increase of saliva; tightness of the chest and difficulty in breathing; and affected eyes if the agent has been absorbed. Later, the casualty will suffer from headaches, dizziness and general weakness with excessive sweating. The final symptoms will be nausea and vomiting with involuntary body functions, muscle twitching and jerking followed by a stoppage of breathing.

The Attack in Ghouta

In the case of the latest chemical attack in Ghouta, it is possible that chemical agents were in existence whilst the artillery bombardment was ongoing, and a mixture of chemical bombs with explosives may have been used. However, by the time the UN weapons inspectors arrived at the scene, much of the proof is likely to have been damaged or disappeared altogether due to continuous bombardments of the area.

Once the weapon has been delivered either by rocket or artillery, the vapor would have a limited life expectancy. Generally, regarding non-persistent agents, the threat is relatively low especially in desert conditions. The expectancy also depends on air pressure, temperature and wind speed, as these factors will have a significant effect of its actual time on target. The hotter the better for evaporation time reduction. Anyone who was caught in the downwind hazard area, would have been affected as well. How far downwind people would have been affected depends on the dose and wind speed.

Personnel who were seen handling the deceased and the casualties did not seem to be affected despite only wearing a surgical mask for protection. By the time the casualties had reached a first aid post, the vapor chemical agent would have disseminated, so there was probably no danger to them. This indicates that the chemical agent which was used, was in vapor form, and therefore, non-persistent.

Looking at the media and press coverage of the latest attack in Syria on August 21, there are clear indications that a chemical agent was used. Governments in countries such as the US, UK, Germany, Israel and France appear to agree with the intelligence given from their own sources

With a clear build-up to military strikes against Syria, a clear understanding of the nature of chemical weapons and their usage is essential in order to analyze the events. With no signs of wounds on those who died, it is clear that a non-persistent agent was used on a population that had no warning of the attack, nor any form of protection against the vapor used.

*[This article was produced in partnership with 361 Security.]