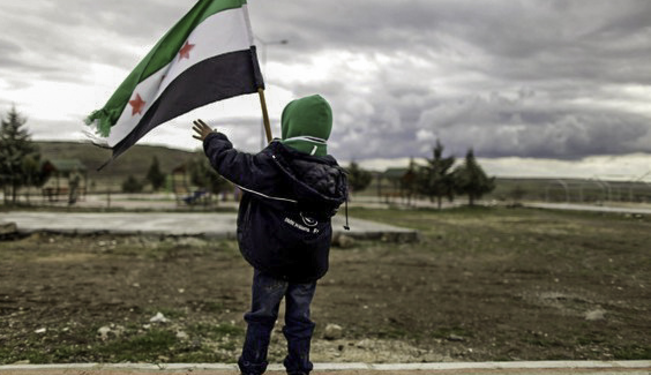 Armed Syrian opposition groups are gaining control of increasingly larger sections of Syria from the al-Assad government. International calls for the establishment of a ‘Benghazi’ in Syria are influencing the audacity and objectives of armed opposition attacks.

The geographic divide between the Syrian opposition in exile and the opposition inside of Syria could end very soon with the establishment of a ‘Free Syrian Republic’ (FSR), within the territorial boundaries of the country. Syrian armed opposition groups are believed to be fighting to seize Aleppo out of a motivation to decisively capture a major Syrian city that can be used as a physical and political capital for an independent territory within Syria. From this territory, an alternate system of political and military administrations could be established that allows for the relocation of the internationally-supported Syrian National Council (SNC) and the military command of the Free Syrian Army (FSA), now in exile in southern Turkey, into Syria itself. This is the ‘Benghazi’ that many of the Syrian opposition’s supporters in the international community have been searching for to support.

On July 24, 2012, US Secretary of State Hillary Clinton asserted that the Syrian opposition and the international community would need to actively plan for the “day after” the fall of the Bashar al-Assad government. Clinton also stated that territorial victories earned by armed opposition groups within Syria would result in a “safe haven” that would be a base of operations for further action by the Syrian opposition. The question remains where a safe haven/FSR would be established inside Syria, or if multiple Free Syrian Republics could exist simultaneously within the county until the whole of the country is brought under a post-Assad government’s rule.

Currently, increasingly larger areas of Syria are now under the control of the armed opposition. The greatest concentration of these areas is in the relatively autonomous “liberated territories” resting in the northwestern Idlib and Aleppo Governorates. A majority of this territory is presently autonomous from the rule of the al-Assad government as a result of the defeat or withdrawal of Syrian military forces from these areas.

Residing in close proximity to the Syrian-Turkish border, these autonomous zones have yet to be contiguously united with one another. There is also no common ‘capital’ from which an opposition administration can oversee the unification of the exiled and internal Syrian opposition, or oversee and command the operations of the disparate armed opposition groups that fight the Syrian military. At present there is no internal Syrian movement, political or military, that appears to have the international support, prestige, weapons, or the funding necessary to challenge the SNC and the FSA, if these organizations were to establish a command-and-control territorial foothold inside of Syria.

The major criticism, however, of the leadership of the SNC and the FSA is that they are in exile, safely away from the combat and bloodshed that internal armed opposition, political demonstrators and civilians face daily. Without the physical presence of these organizations inside of Syria, the necessary process of establishing their legitimacy as the fundamental “morning after” governing bodies of a post-Assad Syria, which the anti-Assad international community seems to favor, cannot begin.

As appealing as a Free Syrian Republic may sound to members of the anti-Assad international community, the armed Syrian opposition is still reported to be under-armed, under-supplied, and only slowly improving its coordination of multiple groups to wage attacks against the Syrian military. While its coordination is believed to be better, the armed opposition still has not completed the total conquest of a mid-sized or larger Syrian city. Its hold on Idlib, a relatively minor market city in an impoverished, agricultural-economy oriented governorate, does appear to have grown stronger. Idlib, could, in the absence of a total victory for the opposition in Aleppo, be the ironic “Free Capital” of the FSR.

In order for the FSR to be born, the anti-Assad international community, or at least Turkey, would need to acquiesce to be its mid-wife. The FSA and the SNC are currently based in Turkey at the sufferance of the Turkish government. Turkey has also, reportedly, allowed the movement of fighters, weapons, and supplies for the armed opposition from Turkey into Syria.

Potentially, if the Syrian opposition is able to maintain control over several border posts along the Turkish border with the Idlib and Aleppo Governorates, and if the Turkish government gives its approval, a concerted effort to move fighters and material from Turkey into Syria could greatly accelerate the consolidation of autonomous authority of the FSR. Northwestern Syria would be a convenient and more easily re-supplied region of Syria to build the new republic.

Challenges to a Free Syrian Republic

There are, however, significant military, political, and demographic obstacles to the establishment of an FSR in these regions. At present, it is reported that these areas are now controlled militarily and administratively by a diverse array of armed and unarmed opposition groups. Most of these organizations are affiliates of either the FSA or the SNC, but some are distrustful of the major Syrian exile groups, and include Salafist organizations and other groups that are potentially affiliates of al-Qaeda. The FSA would need to institute its unchallenged authority inside of the new republic to ensure its security.

Incipient Syrian Kurdish nationalism, or the Kurdish push for autonomy within a post-Assad Syria, may also threaten the political realization of the FSR in northwestern Syria. At present, the Kurdish National Council (KNC) and the Democratic Union Party (PYD) are the most powerful Kurdish parties in the area. Although the two groups are nominally allied with one another towards the goal of improving the status of the Kurdish people in Syria, they are distrustful of each other.

The KNC is an affiliate of the SNC and is stated to have the support, supply, and tacit military training provided by the Iraqi Kurdistan Regional Government (KRG). It is believed to have the blessing of Massoud Barazani, the President of the KRG and the most powerful Iraqi Kurdish political leader. The KNC is seeking to collaborate with the Syrian National Council to create a post-Assad political arrangement that would reaffirm and guarantee Kurdish rights, but not outright autonomy from the rest of the country. It is also currently coordinating closely with the FSA to attempt to bring Syrian Kurdish arms to bear on the Syrian military.

The PYD is an affiliate of the Kurdistan Workers’ Party (PKK), was recently in a tacit alliance with the al-Assad government, and is believed to be working towards the goal of complete autonomy for the Kurdish regions of Syria. Its predominance in Kurdish Syria at present is an anathema to Turkey due to its connection with the PKK.

The group was reportedly allowed virtual autonomy in Kurdish areas in a "wink-and-nod" agreement with the Syrian military, which withdrew its forces from Kurdish villages and cities throughout northern Syria to strengthen its military operations in other areas. These included the suburbs of Damascus, in Idlib, and in Homs. Internal Kurdish rivalries, supposedly suppressed in the name of improving the brutally marginalized social position of Kurds in Syria, could very well flare up into violence inside of the territory of the FSR and weaken the nascent state’s stability.

In addition, the Syrian military would continue to pose a grave existential challenge to the FSR due to the quality and volume of the arms it possesses, including heavy weapons and aircrafts. Larger numbers of defections from the Syrian military could be the result of the announcement and successful defense of the FSR, although these movements of troops from one side to the other cannot be guaranteed. The armed opposition attacking from the FSR would still be at a numerical disadvantage, and would need to ensure that its manpower, supply, and command-and-control structures were not deteriorated to the degree that it was unable to maintain the newly-won borders of the republic.

The Goal of a Functioning Free Syrian Republic

Prior to the establishment of the FSR, the Free Syrian Army and Syrian National Council would need a physical presence, with territorial control recognized internationally, inside of Syria. This would be the actual FSR, from which to test its incipient authority and develop the state structures needed to assume control of Syria after the Ba’athist regime. This would be the build-up to the “day after” the al-Assad government loses its power, and the Free Syrian Republic would be the foundation of the new post-Assad Syrian state. Legitimizing the local authority of the state structures of a republic, under the FSA/SNC, could then take place.

As part of the process of the legitimization of this new authority, the FSA and SNC, recently in exile, would need to include the positive establishment of a governing civilian political body in the FSR. This governing body would need the experience of collaborative interaction between local village and city councils elected by the internal opposition prior to the institution of the new republic. In addition, concrete policies towards integrating ethnic and sectarian minorities, fully and equally into the FSR, would need to be developed and successfully implemented. An internal FSR economic program, scalable to the rest of Syria, would also need to be approved. This would include potentially resuscitating, inside the Free Syrian Republic, the nearly dead trade between Syria and Turkey that was so lucrative for both countries prior to the uprising.

The new republic would also need to establish an enduring and responsive security and political structure. These would represent the foundation of a new Syrian republic that could police and rule itself, administer a successful military campaign against the al-Assad government, and expand the new government’s authority throughout the rest of Syria. In spite of these difficulties, the audacious idea of the establishment of a nascent Free Syrian Republic could be an inevitable reality within the coming months.