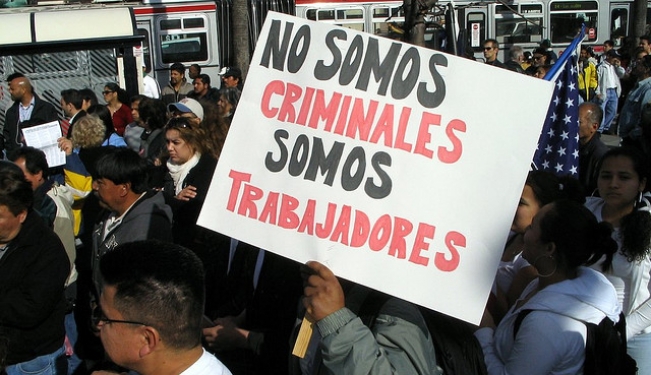 A flow of Mexican migration to the US started little after the establishment of the 1847 border, which is still in place today. Since then, migration has progressed parallel to the socioeconomic and political processes in both countries. At the end of the 19th century, Americans started recruiting Mexican labor to build railroads and to work the booming industries of Chicago. In the early 1900s, 17% of the most important railroad’s workers were Mexican. A few years later, many Mexicans fled the Mexican Revolution (1910-1920) and poured into the US, Cuba and Guatemala.

When World War I broke out, the demand for agricultural labor rose— this is why so many Mexicans came to work in the rural sectors of the US. A huge turnaround occured in the 1930s during the Great Depression: the US sent 347,000 Mexicans back south of the border. Nevertheless, during World War II, the demand for laborers shot up again and a bilateral “arms” agreement allowed 4.6 million Mexicans to temporarily work the fields again. Most of these workers came from rural and uneducated sectors of the population. More recently, the economic crisis triggered by a huge oil bust in the 1980s caused many Mexicans to migrate to the US in search of jobs.

Along with the previous process of labor demand and expulsion, there have been migration laws shaping the population shifts of the US. The 1965 Law eliminated discrimination in the visa-granting process. This law was really intended to promote European immigration, but it actually encouraged immigration from Latin America, the Caribbean and Asia. The Immigration Reform and Control Act-IRCA-1986 conceded visas to undocumented workers, and allowed women and children to join the male immigrants in the US. During the 1990s and 2000s, the migratory influx of Mexicans has stayed high, despite tighter restrictions at the border.

The current picture: work and discrimination

In 2010, there were about 12 million Mexican immigrants in the US. The number jumps to 23,469,651 if second and third generation descendants of the immigrants are included. In other words, if we take into account the three generations, over 10% of the US is composed of people with Mexican backgrounds. The sheer number of these immigrants has sparked the interest of politicians and academics.

Investigations on labor insertion for Mexicans in the US show that Mexicans tend to have jobs that require hardly any qualifications. Thus, their salaries are much lower than those of the native population, or even than those of immigrants from other countries. Fortunately, other studies show that second and third generation Hispanic immigrants in the US tend to have higher qualified jobs and greater salaries.

The economic reorganization of the US has had quite an impact on the labor conditions for workers and immigrants in particular. To fully grasp labor insertion for Mexicans in the US, one must recognize that the characteristics of this immigration have played a defining role in the type of labor pursued and in the immigrants’ assimilation in the USA. Also, one must note that society in the USA has been through many phases of social differentiation, including race, gender and ethnicity. These have contributed to social stratification, particularly in the labor market. Thus, even though many second or third generation Mexicans have similar qualifications to white or non-Hispanic populations, their conditions in the labor market are still inferior.

A simple income analysis can unveil these conditions. If one observes a worker’s income according to origin, generation and occupation in the US, one will find a significant breach between “native non-Hispanic whites” and “Mexicans and their descendants.” While half of the native non-Hispanic whites earn over 23 dollars an hour, the average salary for second or third generation Mexicans is 17.3 dollars an hour. For first generation immigrants that have lived in the USA for over 10 years, the salary is only 15.4 dollars an hour, and for Mexicans who have lived in the US for less than 10 years, the salary drops to 14.4 dollars. This means that half of the immigrants that just arrived are earning more than 14.4 dollars an hour, but that the other half earns less. The situation is not much brighter for African Americans who have lived in the country for over four centuries and still have not reached the living conditions of native whites and non-Hispanics. What causes these differences?

Average Salary per Hour according to generation and occupation

based on Current Population Survey, CPS-2010

To answer this question, two aspects must be taken into account. Firstly, the availability of human capital (qualifications, competencies and skills that can be used in the labor market), and secondly, the discrimination that immigrants experience in the labor market. For the first point, if we follow the “theory of linear assimilation” (which assumes that with time, immigrants will be incorporated in the receptive society) we can expect that the second and third generation Mexicans have a better situation in the job market because they have been incorporated into American society. It is true that with the passing of generations, employment possibilities improve, but even so, there are differences between Mexican immigrants and non-Hispanic native whites. This could be due to the decreased educational opportunities that qualify people for jobs. In other words, the conditions from which the immigrants escaped are transferred to their descendants within the US. This reduces the possibilities of achieving higher education, acquiring proficiency in the English language and reaching high-paying jobs.

Secondly, after observing the graph, it is difficult to say that variations in wages arise from differences in human capital, because when we look at highly-qualified jobs like executives and professionals, we can assume that they require specific human capital, like fluent English and intensive academic preparation. In 1998, Manuel Castells analyzed inequality, poverty and social exclusion in the “information era.” He concluded that the main element explaining unequal participation of African Americans in the labor market is associated with “generalized racism” from American society to the collective of African Americans. Mexicans and their descendants are not exempt from this situation. Gender, race, ethnicity and class function as “the interpretation of reality, the organization of interactive cadences and the legitimization of relationships between individuals” according to Dolors Comas’ book Work, Gender and Culture. This explains the hierarchy of the American labor market, where Mexican immigrants reside on the occupational level, and where African Americans cannot achieve a position similar to non-Hispanic whites.

We must think of paths to reduce inequality between workers with different ethnicities, which will allow a fulfilled economic integration for immigrants. The receptor state must outline a series of concrete actions to protect the immigrants’ labor rights. They must permanently regulate the sectors of the economy where immigrants participate the most, such as domestic housekeeping, in the case of women. Lines of communication must be established between different actors in the labor market, so that salary discrimination and occupational segregation can be properly combated. Another concrete action could be to develop policies that guarantee equal employment opportunity between immigrants and natives, between white people and other races.

On the other hand, the development of these actions would require a deconstruction of the imaginary symbols that the receptive society holds on to— gender, nationality and skin color. In return, health service, education and dignified living conditions could be upheld. Furthermore, programs to ease learning English and recognizing the immigrants’ technical and professional titles would increase assimilation within the labor market. This implies a larger effort, requiring bilateral agreements between the receptor and the expulsing country. These agreements will open the path to equality in the labor market, but the true effects will only come through when they become the base of a resolution dictated by international organisms.