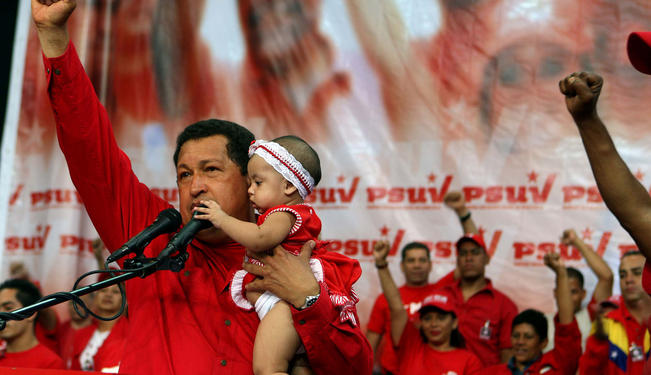 The free, fair and peaceful Venezuelan elections on Sunday, with a clear and accepted outcome has restored the confidence of the world, which had some doubts about the vulnerabilities of Latin American democracies – especially after the constitutional overthrow  of President Lugo of Paraguay in June this year and the unconstitutional removal of Honduran President Manuel Zelaya in 2009. The immediate and graceful acceptance of the people’s verdict by Henrique Capriles, the losing candidate, and his message of congratulations to Hugo Chavez augur well for the future of Venezuelan democracy.  These are also good for the growing maturity of young Latin American democracies, many of which were restored from military dictatorships in the eighties.

The re-election of Chavez for the third successive term is undoubtable proof of the empowerment of the masses of the region. It is the poor and lower middle class who set the political and economic agenda of the region by their election of Leftist leaders. Conscious of this, even the centre-right governments of the region are strongly committed to ‘Inclusive Growth.’

Despite the high stakes involved in the outcome of the Venezuelan elections for foreign powers, there was absolutely no external interference. It was purely a Venezuelan decision, for Venezuela. It is yet another reassertion of the Latin Americans: that they are capable and determined, and that they can decide their destinies themselves, based on their aspirations and perspectives.

On the negative side, there is apprehension that Chavez would use this mandate to intensify his policies of weakening and abuse of democratic institutions, and further damage the private sector. Hopefully, he will tone down his radicalism and moderate his approach.

It seems logical that (a) Chavez’s victory margin has come down (b) his health remains uncertain due to cancer and (c) Henrique Capriles has emerged as a credible alternative to Chavez by securing 45% vote and his reaching out to Chavez’s electorate (unlike his predecessor candidates, who would not even pay lip service to the poor) by reassuring that he would continue the good parts of Chavez's pro-poor policies. More importantly, Capriles’ promise to take Venezuela to the mainstream path of Latin America (a pragmatic centre-aligned policy with a balance of pro-poor and pro-market policies) is appealing even to Chavistas. They too are tired of the excessive radicalism, unnecessary confrontation and poor management of the resources and economy by Chavez.

The second negative score is the re-election of Chavez for an unprecedented third term and his continuous rule for twenty years from 1999 to 2019. This is not good news for a region which has come out from the forgettable past regimes of Caudillos (strong men). At present, he is the longest serving Latin American President. In all the other democracies of the region, the Presidential term is limited to two or one. Even the Constitution framed by Chavez himself had limited the term to two but he amended it to remove the term limit. This bad example might inspire others like President Rafael Correa of Ecuador, President Evo Morales of Bolivia and the Argentine President Cristina, who have dreams of unlimited terms and power.

Some might fear that Chavez’s victory – based on his model of ideological polarization – might spread further in the region, giving rise to more Chavista presidents. But his model has already reached its peak and is steadily and irreversibly losing appeal in the region. This was evident from the case of Ollanta Humala, a fellow leftist leader from Peru.

Chavez’s support was the kiss of death for Humala, who was a presidential candidate during the Peruvian elections in 2006. Besides asking Peruvians to vote for Humala, Chavez went further and openly attacked Humala’s opponent, Alan Garcia, calling him a thief among other things. Though he was initially leading the polls, Humala unexpectedly lost the elections as Peruvian voters felt provoked by the aggressive interference of Chavez. In the 2011 presidential elections, Humala discarded his label of a ‘Peruvian Chavez,’ and remodeled himself as the ‘Peruvian Lula.’ He espoused pragmatism and won the elections.

Similarly, when Jose Mujica, the former guerrilla leader of Uruguay, contested in the 2009 presidential elections, the opposition scared the voters by calling him a Uruguayan Chavez. Mujica too got over this defamation by assuring the world that he would be a Uruguayan Lula, and got elected.  The defeat of the radical leftist candidate Andrés Manuel López Obrador in the June 2012 Mexican elections is also a message to the Latin American Left: that radicalism is not a ticket to power.  Even Daniel Ortega, the authentic Marxist President of Nicaragua has become business-friendly, moderate and pragmatic.

One of the long term achievements of Chavez for Venezuela is the diversification of the trade and economic partnerships. Before him, Venezuela was dependent the on U.S. for over 80 percent of oil exports. Now China and India have become the second and third largest markets with 30% and 15% of the share. Reliance signed a contract on 25 September for long term purchase of 300,000 – 400,000 bpd (which is over ten percent of the total crude imports of India). Reliance has also expressed interest in exploration and production in Venezuela. ONGC is already investing in two oil fields there. This is good for the Indian strategy of diversification of oil imports and investment in these days of uncertainties caused by the Arab Spring and sanctions on Iran.

*[This article was originally published by on Gateway House on October 11, 2012].