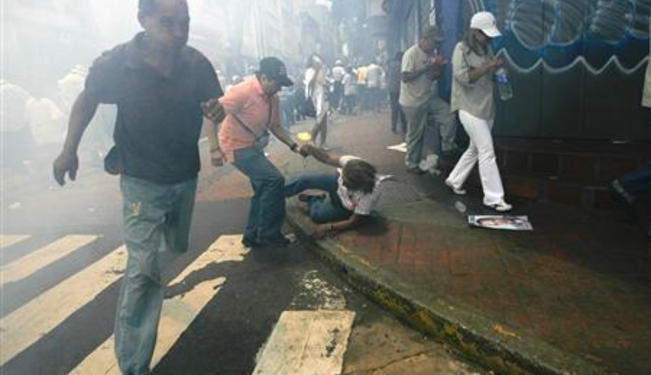 Since taking office in 1998, Chavez has ignored the dramatic rise in violent crime, making security a private good in the socialist republic.

In Caracas, Venezuela’s residential neighborhood of Bello Monte, journalists from multiple publications can be found every morning having coffee at the city’s only morgue. In this way, homicide figures are gathered for the city. More accurate numbers are unknown, as the Venezuelan government stopped releasing official crime related statistics to the public in 2005.

Since Hugo Chavez was elected President of Venezuela in 1998, the nation has replaced Colombia as South America’s most dangerous country, with over 155,000 estimated homicides in the last fourteen years. By contrast, in the ten years before Chavez came to power, around 39,800 people were murdered. Thus, Venezuela’s homicide rate has increased nearly fourfold. Such a dramatic proliferation of homicides usually follows the outbreak of civil conflict, or the imposition of powerful crime syndicates over national sovereignty. These conditions do not apply to the Venezuelan case. Unlike Colombia, which has been in the midst of a civil war against the Revolutionary Armed Forces of Colombia (FARC) since 1964, Venezuela has not experienced any significant civil or international conflict since Chavez came to power. In 1998, Venezuela’s homicide rate was similar to those in Brazil and Mexico. Today, the murder rates in these countries remain about the same, while Venezuela has experienced a drastic increase.

Understanding this crisis becomes even more puzzling after considering that police and military forces have been strengthened since Chavez came to power. This includes the creation of over 100 new police units, dozens of regulatory laws, and the replacement of the country’s criminal investigations, forensics, and counter narcotics office with a new division. Despite grave issues related to domestic security, the government spent three times more money on military and national defense matters in 2011.

The Chavez administration argues that conditions of poverty and inequality explain the current state of violence in Venezuela, yet countries in the region with similar or worse socioeconomic figures have not experienced such sudden increases in crime. Furthermore, the government asserts that policies enacted since 1998 have succeeded in eradicating poverty and social inequality. If there are now more public safety officials in service, and if socioeconomic conditions for many have improved, what factors account for the blatant deterioration in citizen security in Venezuela?

After Chavez’s inauguration in 1999, his first major political action involved completely redrafting of the country’s 1961 Constitution. It is puzzling to consider that the new document was hailed a pillar of defense for human rights given the current security conditions in Venezuela. In Article 2, justice, democracy, human rights, and equality are enumerated as the state’s “superior values.” Article 55 states that the government is responsible for ensuring, indiscriminately, the security of all people.

The proliferation of crime-related statistics, notably homicides and kidnappings, suggests that the Chavez administration has not met its constitutional obligation of ensuring the protection of its citizens. According to Dr. Robert Briceño-Leon, professor at the Central University of Venezuela and Director of the Social Science Laboratory (LACSO) in Caracas, the rate and breadth of escalating violence in Venezuela indicates that the country is undergoing a public health epidemic. All law enforcement units are under the direction of the Ministry of Justice and Interior Relations. In fourteen years, the Minister has been changed ten times, resulting in marked inconsistencies in security-related policies. Since 1998, no other Latin American country has experienced such stark increases in crime and violence; thus, the situation in Venezuela is without precedent. Dr. Briceño-Leon argues that this epidemic can only be explained within a sociopolitical framework, which reveals that the current government’s policy errors and failures account for the marked increase of crime in Venezuela.

Perhaps the gravest consequence is the rampant impunity that exists for criminals in Venezuela. These rates are among the highest in Latin America, particularly regarding exemption for public officials. In tandem with Dr. Briceño-Leon’s postulations, the number of arrests made per 100 homicide victims has drastically fallen—from 118 in 1998 to 9 in 2008. These figures are even lower when public officials commit human rights violations, with impunity rates at over 93%. Both privately and publically conducted surveys indicate that an overwhelming majority of citizens do not report crimes to law enforcement because they believe nothing will be done. Most Venezuelans also distrust authorities, as public security officials are often linked to all types of criminal activity. Consequentially, crimes almost always go unpunished, and delinquents are free to repeat their offenses.

For two main reasons, the solution does not lie in arresting and sentencing all presumed criminals. First, hundreds of judges at all levels have been dismissed by the Chavez administration for a wide range of often questionable reasons. As a result, the reduction of judges indicates an increased number of cases for those still serving. The second crucial factor concerns the penitentiary system in Venezuela. Jails are overcrowded, understaffed, and most are in need of drastic renovations. Riots are common. Notorious criminals, gang and cartel leaders often conduct their businesses from inside the jails. As a result, impunity has become a pragmatic alternative for the government.

Security as a Private Good

Venezuela’s escalating crime repeatedly deprives, or threatens to deprive, citizens of their liberty. This shortcoming has resulted in a sharp demand for private security services, further fueled by a lack of protection provided by police along with a continued mistrust in public institutions. In other words, the government’s failure to hold its monopoly on violence prevention has allowed for the emergence of private actors to fill the vacuum. Many of the estimated 100,000-plus individuals employed in this industry are former police officers that earn much more than they would as government employees. The high costs of enlisting private security means that only those that can afford to pay for these services are able to solicit them. Given that most homicide victims are males younger than thirty from low socioeconomic backgrounds, it is unlikely that a burgeoning private security industry will lower the country’s murder rate. Furthermore, because the state has failed to protect its citizens, the increasing privatization further delegitimizes the current administration.

A fundamental concern for many scholars, NGOs, and human rights workers is the possible effects of this industry’s exclusionary nature. Citizens that do not solicit these services are increasingly susceptible to violence. As such, protection transforms into a private good. Because citizen security is a constitutionally ensured right, the government must work to ensure that all people are protected; thus, it should be considered a public good. This is not the case in Venezuela today. Those distrustful of public security forces and unable to afford private alternatives are left with few options.

How has the Chavez administration been able to remain in power while maintaining a high and continuous level of support from Venezuelan citizens? Dr. Javier Corrales of Amherst College offers a compelling answer by suggesting that the Chavez administration has opted to polarize Venezuela’s citizens. Corrales argues that the government’s political strategy is to solidify support from staunch Chavista backers, while selectively recruiting more members from certain social groups. This strategy seeks to gain and sustain a minimum, yet constant majority of support – enough to ensure political victory during elections. Corrales argues that the Chavez administration chooses to address specific matters in order to generate loyalty from its target groups. Rather than addressing issues related to crime and violence, the Administration highlights its accomplishments, which generally entail the provision of social goods and services to lower socioeconomic populations. Because the government has successfully maintained support from over half the population, it is not seeking to satisfy the demands or appeals of opponents in hopes of earning the latter group’s backing.

Venezuelan society is divided on political grounds. The President and his supporters openly antagonize organizations belonging to the opposition, as well as religious institutions and human rights organizations. The simultaneous deterioration of civil society and the proliferation of crime and violence appear to go hand in hand. The more divisions existing between citizens, the lower the likelihood of people joining together to hold the government accountable for its failures.

In Colombia, a strong, united civil society supported the government in its quest to reduce the country’s abysmal kidnapping and homicide rates. No such effort exists in Venezuela today.

*[This article was originally published in the Winter Issue of Harvard ReVista].