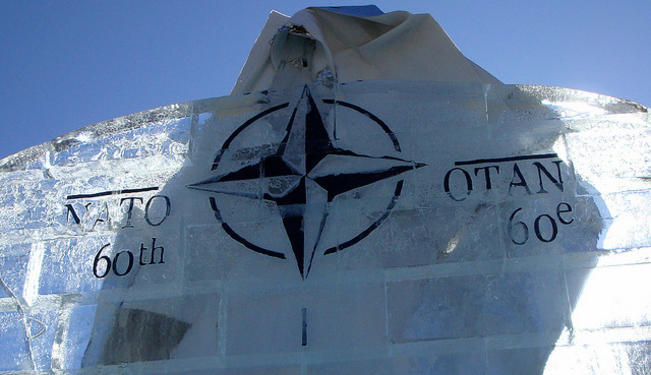 10 years ago, 19 terrorists murdered nearly 3,000 human beings—including 24 Canadians—on American soil, prompting NATO, for the first time in its history, to invoke Article 5 of its charter calling for collective defense.

Collective defense goes beyond securing our immediate security interests. It also advances our values both through the defense of liberty at home and the pursuit of human rights abroad.

Despite this, the post-Cold War United States seems to be unwilling to prioritize securing long-term strategic interests ahead of obtaining short-term commercial benefit. Furthermore, core funding for the US military has decreased since the end of the Gulf War while European defense capabilities have also declined.

The United States- leader of the free world, has yet to draw a new strategic map of the world after having won the Cold War. Do NATO states believe that the fall of the Soviet Union represented the end of history? Do they believe that the security of their populations can no longer be threatened?

From Islamic extremists pursuing nuclear weapons and engaging in acts of terrorism to an irredentist, dictatorial Russia and a rising “Communist” China, there indeed remain serious threats to the security of liberal democracies. With the United States almost inevitably set to progressively retreat as the global superpower over the decades ahead, Canada—a nation with a stronger economy (boasting a more competitive corporate tax rate and a debt-to-GDP rate significantly reduced since the 1990s, in particular) and a far less polarized electorate than the United States—has a distinct opportunity to advance international commitment to the defense of liberty.

Canada would do well to pursue the following five policies:

1) Canada should double the size of its military. Canada’s military spending is lower than that of most NATO states’ and such an increase will put its armed forces on par with those of its allies. Canada has already contributed significantly to NATO by completing a difficult mission in Kandahar, Afghanistan and by having Lt. Gen. Charles Bouchard lead NATO’s 2011 mission in Libya. It’s time to take the next step.

2) Canada’s current negotiations with the United States concerning a security perimeter deal should be completed and further steps should be taken to advance the security and commercial interests of both states. One first step should be the negotiation of a common environmental standard between the two countries. This would achieve two goals:

First, it would protect Canada’s oil sands from the potential wrath of the US Environmental Protection Agency. A loophole in the 1989 Canada-US Free Trade Agreement allows for one side to sanction the other over dangers related to health or the environment. A common environmental standard between both states would protect Canadian jobs and would ensure that Canada–a liberal democracy—can continue to be America’s primary supplier of oil.

Second, the deal could be eventually expanded to other states as a mechanism for regulating the private sector over environmental damage without the need for the United Nations to provide a forum for the negotiation of such a deal. Countries around the world would be able to pursue clean technology with more confidence and Western states would prove that they can substantially advance their interests and values without the help of the dictator-filled UN.

3) With climate change producing a thawing Arctic, Canada should negotiate a deal similar to the 1988 deal it signed with the United States concerning the Northwest Passage but in which Canadian sovereignty is more strongly asserted. The intended result of the 1988 deal was
that Canada controls the Passage while the United States gets essentially unfettered access to it. The new deal would allow for long-term Western security interests to be ensured while reassuring the United States that its commercial needs will be met. (The Northwest Passage provides a shorter path to Asian markets from the American Northeast than does the Panama Canal.)

With as much as 25% of the world’s oil resources potentially located in the Arctic, failing to negotiate a deal with the United States would be extremely dangerous over the long term. Such an agreement between Canada and the United States will demonstrate Canadian and American unity on the issue of Arctic sovereignty and will discourage Russia from intervening militarily to ensure its interests–namely domination of the Arctic’s resources and shipping lanes, possibly through the seizure of territory in Canada’s Arctic region, an act that could destabilize the North American continent.

The two options available are rather clear: either Canada asserts sovereignty over the Northwest Passage or it becomes an international strait- possibly subject to Russian and Chinese unchecked infiltration. Once Canada and the United States have reconciled their defense-related views over the Arctic, they can approach Russia together to advance the commercial interests of the three states.

4) The aforementioned negotiations with Russia over Arctic commerce should be pursued simultaneously with a joint ballistic missile defense (BMD) pact between the United States and Canada with Russian consent, a move that would strengthen relations between the United States and Canada and would repair the damage done by the Canadian refusal to negotiate such a deal over the last decade.

5) Canada and the United States (and eventually other NATO states) should sign an agreement on the prevention of mass atrocities abroad. Global inequality and environmental change threaten to spark more mass atrocities (war crimes, crimes against humanity, ethnic cleansing, and genocide) across the globe. These atrocities in turn often lead to the spread of pandemics, a spillover of violence across borders and the establishment of safe havens for terrorist groups, all three of which threaten the security of Western states.

Signing such a deal is particularly important, seeing as it suggests that a key way to defend liberty at home is to fight for human rights abroad. Hence, our interests and our values are intrinsically linked.

10 years after 9/11, Canada can prove two things. First, it can prove that that NATO states still have a role to play in defending liberty. Second, with the American and European political and economic scenes visibly in turmoil, Canada—at least symbolically—can become the leader of the free world.

*[This article was originally published by The Sentry on October 12, 2011].