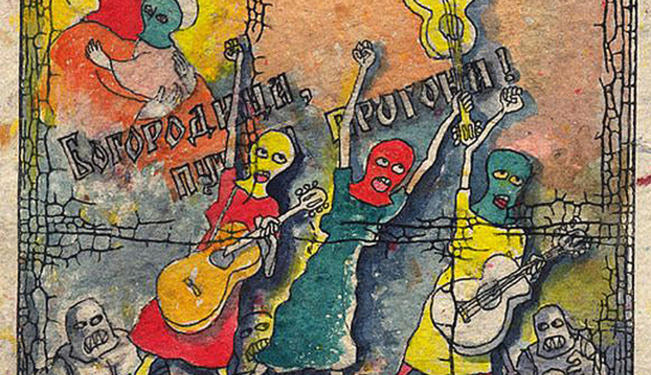 “The devil has laughed at all of us.” “The dark forces are uniting against us.” This is the rhetoric Patriarch Kirill, the head of the Russian Orthodox Church, uses when speaking of Pussy Riot and their punk-prayer staged in the Cathedral of Christ the Savior in Moscow in February this year. Church activists have been harassing supporters of the band. One incident particularly stands out: when a female supporter told a church activist during an altercation that “god will forgive all”, he hit her. When the three arrested members of Pussy Riot apologised for their “ethical” mistake (they still do not admit to any criminal wrongdoing) during their trial in August, the employees of the cathedral refused to accept the apology, calling it “insincere”.

So much for Christian forgiveness.

The trial of the three young women, Maria Alyoshina (24), Nazeshda Tolokonnikova (22) and Yekaterina Samutsevich (30), has turned into an international cause célèbre. Viewed by many as a personal vendetta by President Vladimir Putin (who had every right to take offense at the title of the punk-prayer, “Mother of God – Rid us of Putin!”), the case attracted support from such celebrities as Yoko Ono, Paul McCartney, Stephen Fry, The Red Hot Chili Peppers, Patty Smith, Bjork, and numerous heads of state including David Cameron and Lech Walęsa. Madonna, during her concert in St. Petersburg, gave a speech in support of the accused, freedom of speech, gay rights and religious tolerance and attracted a lawsuit by a local MP under a new controversial law that prohibits public propaganda of homosexuality among children.

Over a hundred actors, musicians, film directors and artists signed a petition (which the court refused to acknowledge) in support of Pussy Riot. Members of the European Parliament nominated the band for the prestigious Sakharov Prize for Freedom of Thought, instituted after an iconic Soviet human rights activist and dissident, and awarded in the past to the likes of Nelson Mandela and organisations such as Reporters without Borders. Even Prime Minister Dmitry Medvedev, in an interview given to the London Times, said it was “unproductive” to keep the women in jail. All the Russian human rights abuses in Chechnya haven’t produced such international outcry.

Pussy Riot began in 2011 as a political project rather than an artistic one. There are no permanent members, and the group welcomes anyone willing to put on a colourful balaclava and perform protest songs. Right now, the group claims there are “a few dozen of us”, as they told Novaya Gazeta, and they continue their fight against the Putin regime despite three of their members being on trial. The collective sees itself less as personalities and more as a political statement, and the prime goal is to dethrone Putin and his team. The political feminists would then like to move on to the fight for gender equality and gay rights.

Prior to the stunt at the cathedral, the group had already attracted attention by staging performances in expensive boutiques, on top of moving trolley buses, in the metro and at the Red Square. Despite invitations to perform with other artists, they claim to only play “the best illegal venues” and practice their getaway skills. But, like any plan, this one too had a flaw.

In March, Masha and Nadya (as they have become endearingly known to the world) were arrested in a joint operation between the police and the Federal Security Bureau. Katya was arrested two weeks later. They have been in custody awaiting trial ever since. According to their lawyers, they have been refused medical treatment, hot food during the trial, and have been unable to see their children. (Masha has a five-year-old son, Philip and Nadya a four-year-old daughter, Gera, both of whom are too young to be admitted for visits.) Their requests to contact their family have been publicly ignored. When the trial finally opened in July, the defendants were placed in a glass cage – a controversial Russian tradition – an upgrade from a real cage from the previous hearings. Dogs patrolled the courtroom. Violetta Volkova, one of the defense lawyers, announced that her office accounts have been frozen by the tax office in April and Nikolai Polozov, another lawyer, had received death threats. Words used to describe the process range anywhere between a “disproportional response” and an “abuse of justice”.

Legal commentators agree that an appropriate charge would have been under article 5.26, that punishes any harm directed at religious feelings of others with a fine of up to a 1,000 rubles (around GBP 20). After all, the first two of the three linguistic analyses did not find any trace of “religious hatred” in the words of the song. Yet this is exactly what the three women have been convicted of in August: hooliganism motivated by religious hatred, punishable by a prison sentence of up to seven years. They were sentenced to “just a little two years”, as President Putin put it in his 60th birthday television interview.

The Pussy Riot trial has hauled the many shortcomings of modern Russian society into the limelight. From fanatical religious vitriol (in a country that only two decades ago emerged from state-imposed atheism), judicial misconduct, to gross sexism and plain cruelty. In Russia, to this day, a common phrase goes, “If he hits you, he loves you”, serving as a meager consolation to the countless victims of domestic violence. Despite years of communist equality where women worked beside men, in factories and on the railroads, as well as looking after the family, a woman is still viewed as not much more than Adam’s missing rib. The former head of Gazprom Media, Alfred Koch, in his blog entry that seems to criticise the frantic reaction of the Russian Orthodox Church, refers to the three women as “retards” and “infantile, irresponsible fools”. In July, Dmitry Rogozin, the premier of the Russian government, tweeted: “Poor little cows. So many important rich daddies are ready to vouch for them.”

So much for gender equality.

In his insightful op-ed for the New York Times, the editor-in-chief of Russian GQ Michael Idov picks up on the resentment towards the attitude of defiance and calm self-confidence maintained by the three accused. Their smiling faces and intransigent unwillingness to be reduced to the fascist Kinder, Kirche, Küche triptych are an affront to those who want an apology – a true, “feminine” one. Idov puts it brilliantly: “When you’re a woman in Russia, nothing but tears will do.”

This sentiment is picked up by Henry Reznik, the head of the Russian Lawyers’ Association. He cites a passage from the verdict: “Hatred and religious antagonism from the side of the defendants was demonstrated throughout the trial, which became clear from the defendants’ reactions, emotions and phrases in the course of the questioning of witnesses.” So the judge did not like their attitude. Unfortunately, for over 200 years it has been illegal to consider the defendants’ behavior in court as evidence of their guilt. As President Putin put it in his celebratory interview, “They got what they asked for.” Hardly. Public censure, perhaps a social service order would have been expected. But somehow it is doubtful that the two young mothers, with no criminal record of previous convictions, were asking to be separated from their children for two years.

So much for a proportional use of force.

The popular backlash surrounding the arrests has been overwhelming. The action has indeed split Russians, as few openly approve of the loud, offensive punk-prayer, but the aggression of the persecution has riled many. A recent poll by the Levada Centre concluded that only 6% of Russians empathise with the women, while 14% feel antagonistic and 20% have nothing good to say about them. Another poll, cited by the BBC, concludes that 43% find the sentence too lenient.

Yet while many politicians, artists and religious leaders were quick to publicly accuse the band of heresy, diabolical acts and idiocy, over 1,500 believers signed a petition in support of them. There has been a wave of copy-cat acts throughout the country and abroad, with churches defaced, crosses being pulled down and women expressing their solidarity and emancipation in unpublishable ways. On the day of the August verdict, the rest of Pussy Riot performed their new single, “Putin lights the flames of the revolution”, a blunt reminder that the disproportionate reaction to the February performance by the Kremlin and the Russian Orthodox Church has made an almost-unknown punk band into one of the most recognized art projects in the world and an international symbol of freedom of speech, self-expression and religious tolerance.

Regardless of what one thinks of their artistic output, Pussy Riot represents the new wave of political awareness that has recently emerged in Russia. They are often referred to as soft-headed fools, but Nadya is in her final year of philosophy at the prestigious MGU university; Masha is in her fourth year of journalism and volunteers with an Orthodox charity that helps children in psychiatric institutions; Katya works as a computer programmer, and has a degree in photography. They represent a new generation: young, educated, well-travelled and well-informed. A generation that is much less likely to put up with the autocratic cleptocracy that the current regime has fostered.

So much for keeping quiet.