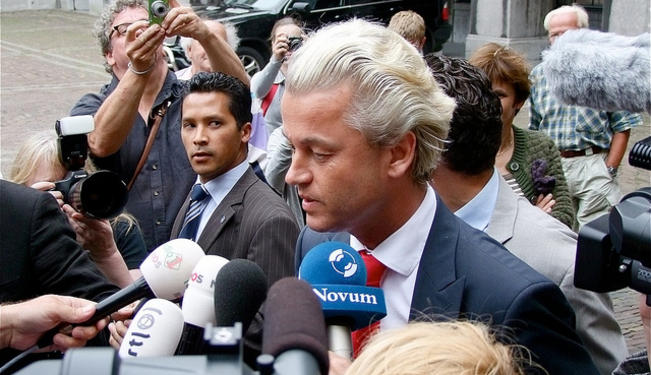 In The Netherlands, far-right politician Geert Wilders is a national treasure. He is the man the Dutch love to hate. But love-hate relationships can also end, and this might be the case for the politician. As the leader of the Freedom Party, Wilders briefly gained political power when he supported the minority cabinet in 2010. The minority cabinet’s cooperation with Wilders was seen as an unusual alliance, but after the Freedom Party (PVV) won 24 out of the 150 seats in Parliament, Prime Minister Mark Rutte could hardly avoid forming a coalition with them. At least not April this year, when Wilders took a gamble that made that same government collapse. Not a smart move: the Dutch vote showed a decrease of faith in his politics in the September 2012 elections, when the PVV won only 15 seats.
On November 5th, the new Dutch government presented itself in the famous ‘bordes scene’ when, after the swearing-in ceremony by Queen Beatrix – held this year for the first time in the presence of cameras – the Queen and coalition cabinet presented themselves to the public on the stairs of the royal palace. Although the Dutch government is slowly saying goodbye to the shrinking influence of the monarchy, the presentation of the new government remains a staunch tradition.
Rutte’s first week as a second-term PM is undoubtedly quite different than it was two years earlier. When the Liberal PM first started as the country’s leader, he knew he had to make compromises that stretched further to the right. Now that the Freedom Party lost almost half of its seats, Wilders is far from being a threat. Still, far right politics without Wilders would probably have been different, if not far less significant for Dutch politics. In spite of his downfall, he still is the one who put far right ideologies on the political agenda and who succeeded in humanizing the Dutch far right.

In other countries, the current far right movements started in early 2000’s, the 9/11 attacks serving as a springboard. In the Netherlands, the murder of far right politician Pim Fortuyn in 2002 and film director Theo van Gogh in 2004 – both killed because of their controversial convictions – had an enormous impact on the political climate. According to many, terror and distress were the catalyst for the rise of the far right. Wilders stepped up just in time. In 2004, he was still with the Dutch  liberals, but he thought that they had to make a radical shift to the right. After an internal fight within the Liberal Party, Wilders left the group, founding his own political party in 2004.
Like any politician, Wilders had a complete election platform, yet it seemed as if he had just one mission: to get rid of all Muslims, to prevent Europe from becoming ‘Eurabia’. Immigration was talk of the day for many years and Wilders reaped the rewards. Every Dutch citizen had something to say about Wilders. Either he was a saviour, a promise, a threat, a mascot or a clown. However, when the general focus shifted from immigration to the economic crisis, Wilders was left without his central platform. Also, he proved to be a difficult man to work with. After weeks of negotiations on austerity measures last spring, Wilders pulled the plug. As a lot of other European countries, The Netherlands were obliged to sharpen austerity measures in order to meet the European budgetary rules. Wilders refused to be ‘dictated’ by Europe and withdrew his support from the cabinet. Besides losing the faith and trust of his fellow politicians, he lost the support of his own followers.
To respond to the latest developments, Wilders was ought to seek another item on the agenda that would trigger people to vote for him. Immigration and Islam faded into the background; the new enemy would be Europe and the Greeks. “Not a penny more to the Greeks” became his motto. And, more importantly, if it were up to him, The Netherlands would step out of the Euro and go back to the Dutch guilder. The gamble seemed not in his favour. Despite some extreme-right ideas here and there, the average Dutchman seems to be pro-Europe, as was seen in the last elections, when the pro-Europe Liberal Party and Labour Party took the bulk of the votes.
So now Wilders is back to where he started, although now with a reputation to live up to. The future of the far right lays not so much as in his hands, but as long as he remains the only major player in the field, his popularity will stay as the far right’s benchmark. If Wilders wants a second chance in politics, he will have to win back trust of his followers, but mostly of his fellow politicians. But for now, populist agenda is being eroded from Dutch politics by more immediate concerns, and Wilders’ position at the centre of the political arena is proving untenable.
The views expressed in this article are the author's own and do not necessarily reflect Fair Observer’s editorial policy.