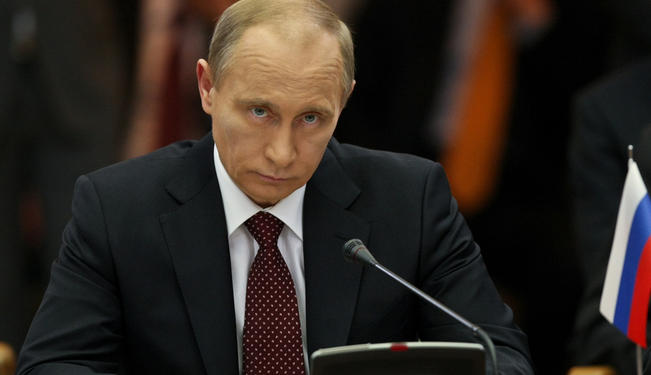 Russia wants to restore its position as a world superpower.

Last weekend, as Ukrainians commemorated over a hundred dead protesters, Russian troops entered the Crimean Peninsula in the Black Sea, taking advantage of the country's mourning.

The international community, including the United States and the European Union (EU), are holding their breath as one wrong move could lead to war. Ukraine's acting-president, Oleksandr Turchynov, has ordered the country's armed forces to be on standby. However, with Ukraine's underfunded and outdated military, it will be difficult to resist a Russian offensive.

Across the Atlantic, US President Barack Obama has warned of possible sanctions in a bid to isolate Russia, as the standoff continues.

Meanwhile, Moscow's United Nations envoy, Vitaly Churkin, has claimed that former Ukrainian President Viktor Yanukovych asked the Russian government for support. While the US and EU member states back Ukraine's interim government, with US Secretary of State John Kerry due in Kiev on Tuesday, Russian President Vladimir Putin has dubbed Yanukovych's ouster an "unconstitutional coup."

Fair Observer's Marian Manni talks to Yana Korobko, vice president of the International Advisory Council of the Institute of Peace and Development. Of Ukrainian origin, Korobko is currently in Kiev and explains Russia's move.

Marian Manni: What is happening on the streets of Kiev?

Yana Korobko: I can feel the sadness. Everyone, including children, are going to Maidan with flowers to show their gratitude to those who were killed — those who gave their lives for the future of Ukraine. Everyone is doing what they can: doctors are working for free, giving medicine if someone is injured; there are free psychologists and psychotherapists for those suffering from post-traumatic syndrome; free food; and facilities to sleep for those who come from other cities and countries.

Manni: How have people in Kiev reacted to the news that Russian soldiers have entered Crimea?

Korobko: There are protests against the Russian invasion everywhere. Some people are carrying banners stating: "Boycott to Russian Products" or "This is an Invasion into Domestic Affairs." They are very frustrated about the Kremlin taking advantage of Ukraine's calamity and the actions of its sister country. I am seeing a big change in the Ukrainian people's attitude toward Russia.

Manni: Why did Russia send its troops to Crimea?

Korobko: The main pretext for this was the rotation of troops that had already been located in Ukraine in accordance with the Kharkiv Accords, signed on April 21, 2010, which extended the Russian lease on naval facilities in Crimea. Russia had not confirmed that its troops were somehow linked to the Ukrainian crisis until now.

Manni: But even the Ukrainian prime minister has said that this isn't just a red alert, it’s a declaration of war.

Korobko: Absolutely! No country has the right to invade the territory of another country just like that in modern times. There will be severe repercussions if Russia continues to interfere with force in Ukrainian domestic affairs. We are already witnessing declarations from the West in possibly isolating the Russian government, like withdrawing from global conferences or the freezing of funds.

Manni: Do you think this crisis will lead to a full-blown conflict?

Korobko: This is a very delicate diplomatic game between the West and Russia. Even if the Ukrainians wanted to, they wouldn't have the power to influence the outcome of events that are occurring in their territory. This depends on the delicacy with which the West will be handling Vladimir Putin's mentality, tactics and diplomacy.

The situation reminds me of the Cold War. If one side starts a military offensive, it could lead to not even a regional conflict but instead a world war. To prevent such an outcome, the West would have to find a common language with Putin, which isn't very easy at all.

Manni: What can we expect Russia to do next?

Korobko: Russia is waiting for Ukraine to attack first, in order to make Kiev accountable for the war. That’s why it’s so important for Ukraine to keep calm and to ignore all this provocation. There will be thousands of them coming from the Russian side. Putin uses provocations to achieve what he wants.

Manni: And what does Putin want?

Korobko: All of this has to do with Russia’s obsession with power and its ambition to become the next world superpower. Without Ukraine — with its strategic geopolitical location — Russia would never be able to fulfill this historic ambition.

Manni: Is Ukraine the first step in Russia's plan to gain power in the whole of eastern Europe once again?

Korobko: For a country intending to become the superpower, the question is when will be the appropriate moment to start implementing such a plan. It seems the moment has come for Russia.

Of course, there are hidden agendas and tactics. Russia has been carrying plans for its revival as an empire since the collapse of its monarch regime, and now Ukraine has somehow become the starting point for Russia's realization of its supremacy ambitions.