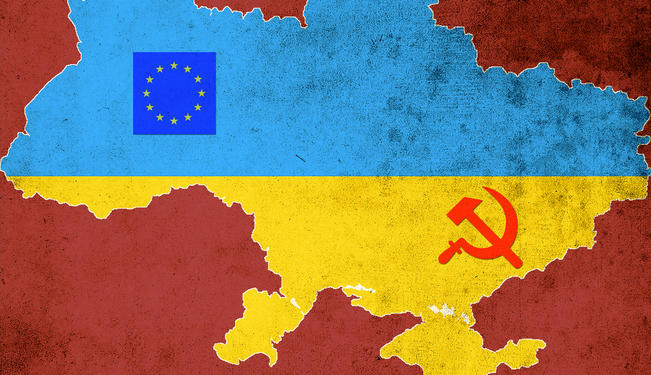 A federal Ukraine might be the only way to resolve the current crisis in Crimea.

This past week has presented us with a new reality — a strong and assertive Russia confronting a weak and divided West in what some observers have already labeled “Cold War II.”

Cold it is, but for how long? There is a clear and ever-increasing risk of military confrontation between Russian and Ukrainian military.

Unquestionably, the recent so-called “revolution” in Kiev has an element of the armed revolt, coup d’état, putsch – you name it. The revolt, according to the Russian government, received a great deal of support and encouragement from the West.

This, however, was not as substantial as support provided by Russia for the ousted Ukrainian government. On December 17, days after the first pro-European manifestations began, Russian President Vladimir Putin promised to buy $15 billion worth of Ukrainian government bonds and sharply cut the price of natural gas for its economically struggling neighbor.

Russia’s attempts to support the troubled presidency of Viktor Yanukovich is understandable. Then, as now, it tried to safeguard its legitimate “national interests.” “Soft” interests, such as the right for Russian-speaking citizens to use their language in official correspondence, and “hard” interests, like using the Russian navy base in Crimea, or preventing any other major power from exerting economic or military dominance in the region.

However, to assume that Western and Russian interests are always and necessarily antagonistic would be a mistake.

For Russia, as well as for the West, trying to prevent Ukraine’s territorial integrity is a priority. If divided, both western Ukraine as well as its more economically developed eastern part will require political, military and, most importantly, economic assistance. In the current post-crisis environment, neither Russia nor the European Union (EU) is prepared for such an outcome.

Partitioning Ukraine will also not improve, but instead fatally compromise Russia’s security as it will split the state into two, one of which will inevitably be admitted into NATO. Kiev is less than a thousand kilometers from Moscow and the last time a foreign military came so close to Russia’s capital was in September 1941, when the Soviet Union was crumbling under the pressure of the German military.

And that is even before bringing up the issue of Russian oil and gas pipelines. Six of these run through Ukrainian soil, delivering more than 30% of Russia’s energy exports to western Europe. Divided and polarized, Ukraine will still be of strategic importance for Putin and anyone who comes after him, as it occupies one of the most important transport corridors from Russia to central, western and southern Europe.

There is no doubt that the Ukrainian Revolution had a lot to do with a number of the so-called “legitimate grievances” of the people. Epic corruption has paralyzed Ukraine, as did the rule of one of the most incompetent rulers in modern European history. Even Putin sees no reason to hide his disdain for the person who “deserted his people and betrayed those who entrusted him with the responsibility to govern.”

Yet the revolution has brought to light one of Europe’s most disturbing trends; namely the growing and strengthening neo-Nazi sentiments across the continent.

Though not invited into the new government coalition, the Ukrainian far-right takes credit for being the most determined and disciplined force of the Maidan. Its paramilitary muscle played a leading role in the Kiev street battles, storming and occupying administrative buildings in western Ukraine, setting up armed patrols, and detaining and questioning supposed Yanukovich loyalists and alleged Putin “spies.”

While in France and Austria the far-right speak out against immigration and multiculturalism, it is in the countries of the former Soviet Union that Russophobia has become their trademark.

Surviving members of the Estonian Legion who fought alongside the German Waffen SS during World War II, as well as the neighboring All For Latvia! factions, have been trotting the streets of these Baltic states for nearly two decades, demanding total alienation from all things Russian. Political parties were formed around the idea of repelling the Russian threat and uncovering Russian conspiracies at every possible turn of events.

Ukrainian nationalists, however, take a step further by presenting themselves as supreme guardians not only of Ukraine’s independence, but of the European “race” in general. They want nothing less than to impose their grand, ultra-nationalist narrative over the whole of Ukrainian politics.

Right Sector — a conglomerate of far-right groups across Ukraine that is a European version of the Taliban — aspires to be in charge of the spirit of the nation, its zeitgeist, capable of founding a new, pan-European “White Caliphate.” In a recently published book, Nation and Revolution, its leader Dmitri Yarosh states: “Great Ukraine sees itself not as a tyrant of the world, but as its international arbiter, its helmsman, the leader of the white race.”

Such a possibility, however remote, alarms Russia, which builds its own narrative of spiritual supremacy based on Russian orthodoxy, Putin’s autocracy and the form of controlled nationalism. It should alarm the EU, as further radicalization of anti-immigrant sentiments across the continent spells trouble for many European governments.

It also makes a civil war between the pro-Western nationalists and the Russian-speaking east almost inevitable, as the latter would never agree to live in a state that glorifies racist brutality and ethnic purges, while the former would choose to fight rather than accept Russia’s patronage over Ukraine. A protracted period of civil unrest in this strategically important part of the world means a humanitarian catastrophe for Europe and a real and palpable threat to its stability.

Clearly, the Ukrainian crisis cannot be allowed to spread any further. Paradoxically, the shortest way to achieve this would be to allow Putin to have his way, namely to guarantee that the country will not be seeking NATO membership any time soon. This can be done against Russia’s guarantee of non-interference in Ukraine’s internal affairs.

Further, it would be wiser to recognize the fact that, while Ukraine’s EU membership is distant, it’s membership in the Russian-led Customs Union is immediately beneficial: Russia remains — and will remain in the foreseeable future — Ukraine’s biggest economic partner. Finally, the new Ukrainian government should guarantee Russia’s oil and gas transit to Europe, making Ukraine an important partner for both Russia and the EU.

The Crimean crisis also shows that Russia neither can nor should be pushed further out of Europe. This policy has reached its limits, beyond which lies military confrontation. Squeezing Russia out of Europe by absorbing its former Soviet republics into EU and NATO increases the risk of destabilization of Russia, making it more susceptible to nationalistic sentiments and policies.

Pretending Russia is finally confined to the limits of our understanding caused the West to lose the initiative, as well as its ability, to predict and influence Russian policy in the “near-abroad.” Europe needs to fundamentally reassess its relationships with Russia, and make Moscow its strategic partner, not its enemy.

Should the West regain consciousness, what can be done to preserve the Ukrainian state? The answers to this question can be found in analyzing the history of federal and confederate states, such as Germany and Switzerland. A Ukrainian Federation can and will be the only way of balancing not only the interests of its neighbors, but also cultural and economic diversity of its own. It would also provide for the two opposing cultural narratives to be contextualized in what must appear as a story of a nation, in which diversity becomes an asset rather than a liability.

This can become a much-needed example of a multilingual and multinational, post-Soviet society accepted as a rightful member of an increasingly diverse European family. An example that may inspire people far beyond the continent.