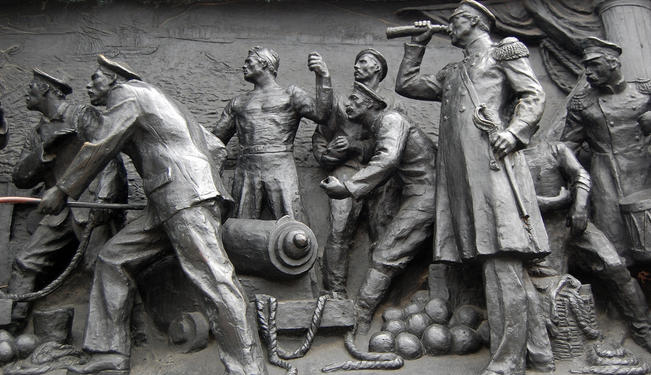 Sanctions must be imposed on Russia to keep the peace in Europe.

"A short, victorious little war" is said to be what Tsar Nicholas II wanted in 1905, and what the Argentine generals wanted in 1983. There are echoes of the Falklands in the transparent deception with which military maneuvers had begun, the flagrant lies the invading government is telling its own people, the invocation of God to bless an operation of which he would certainly not have approved, and the contempt it reserves for the democracy at which it takes aim: decadent, divided, and soon to be abandoned by pusillanimous allies.

The initial military operation has been impressive and professional. Those "I can’t believe it’s not Russia" soldiers deftly sowed division in the West — between those that wanted an excuse to follow the Foreign Office’s Four Stage Strategy, and those, many of whom grew up in the old Soviet Bloc, who knew exactly what Moscow was up to. That this implausible deniability struck within Germany’s coalition government was surely a bonus.

The main question now is how big a risk does Vladimir Putin want to take? Those elite Russian troops have so far been very careful not to fire the first shot, while Ukrainian forces have wisely treated the provocation as one might treat a drunk man looking for a fight just before closing time.

Putin’s official propaganda has told of 675,000 refugees (made up); of Russians in Ukraine under threat from neo-Nazi mobs (the leader of Simferopol’s Jewish community thought the swastika daubed on a synagogue there was a put-up job); and even of Crimean Islamist fighters returned from Syria (be careful what you wish for).

If Putin backs down now, he risks looking ridiculous on just the issue, protecting the strength of the Russian state, on which he bases his legitimacy.

Douglas Hurd’s fine novel, The Shape of Ice, in which a post-Soviet Russia invades one of the Baltic countries, warns against how the emotional pressure to "do something" can lead to destructive and unpredictable war. And in the Crimea, it is reasonable to ask whether it is worth risking 70 years of peace between major European powers. The peninsula was, after all, only handed to Ukraine by Nikita Khrushchev in 1954. Most of its people are Russian.

Moreover, Russia’s so-far bloodless invasion really only formalizes Moscow’s effective control of Crimea, where the Russian Black Sea Fleet is based, and in which Ukrainian  forces have always been heavily outnumbered.

To this should be added economic considerations: Russia supplies significant amounts of gas to Germany and Italy. Disruption would increase prices and push the eurozone’s already vulnerable economy into recession.

This argument for "masterly inactivity" is often accompanied by one much more disreputable: the notion that Ukraine is evenly divided into "Russian" and "Ukrainian" ethnic groups, and it risks sliding Balkan-style interethnic war.

A gross oversimplification in the former Yugoslavia, it applies to this crisis only to the extent that Putin’s promise to protect "ethnic Russians" beyond his country’s borders resembles Slobodan Milosevic’s promise to ethnic Serbs. The conflict in Ukraine is primarily political and is as much to do with how the country should be governed. Many people speak both Russian and Ukrainian and have no problem either with Russian culture or democratic politics. The notion that they are incompatible is an old Tsarist myth.

If the seizure of the Crimea were a one-off, there might well be a case for thoughtful inaction. The risks of economic damage and war are great indeed.

But it’s quite clear this is not. Putin has done this before. The Baltic states could be next. The crisis is more important than the behavior of one man: Europe’s prosperity and security depend on the fundamental rules of international law being followed on this continent. They do not enforce themselves against hostile powers, and need to be backed by the threat of political, economic and, if necessary, military force.

Though the normally collected Angela Merkel told Putin that he had lost "touch with reality," there is still a rational explanation for his behavior. Everything he has done is so far consistent with an attempt to repeat Russia’s provocation of Georgia in 2008.

Putin’s problem is that Ukrainians have replied with heroic restraint. In the coming days, we should expect further provocations. Contingency plans to, say, arrange for pro-Russian mobs to storm Ukrainian army bases in the Crimea have doubtless been made. Staged terrorist attacks cannot, if the murdered journalist Anna Politovskaya was right, be ruled out. And though the regular Russian forces have been supremely, and uncharacteristically, disciplined, the Crimean "self-defense" units are anything but.

Diplomacy has to combine a mechanism to allow Putin to retreat, while simultaneously issuing credible threats if he does not. That he had not officially pronounced on the conflict until Tuesday, leaving to his furry friend Dmitry Medvedev, indicates that he is still leaving himself a way out.

Even a face-saving retreat will be painful, so the costs of him of not backing down need to be significant, clear, and concentrate his mind. As amusing as Putin holding a G1 summit in Sochi would be, symbolic rebukes are not enough — economic measures are needed.

The threats can be made immediately and will spook Russia’s markets, even though sanctions will not take immediate effect, because individual wealthy Russians currently lack the power to challenge Putin, as Mikhail Khodorkovsky, Vladimir Gusinsky, and Boris Berezovsky found out. They will, however, make the elite more likely to turn against him as serious economic isolation bites.

There is, furthermore, one chink of light. Russia’s threats to cut off energy appear serious, but are unlikely to be carried out. Moscow is more dependent on selling the energy than Germany and Italy are on buying it. Its "energy weapon" would not be out of place in Wile E. Coyote’s hands.

That weapon is nonetheless more effective than the British negotiating position that leaked yesterday, revealing something so weak it seemed to have been copied from the entry in the 1938 file at Kew that prompted Winston Churchill to write to David Lloyd George: "I think we shall have to choose in the next few weeks between war and shame, and I have very little doubt what the decision will be."

But while Neville Chamberlain sought to buy time to rearm against a military aggressor, yesterday’s position was financially motivated. This is short-sighted and foolish.

Fortunately, even if London or Brussels don’t impose sanctions, City sources claim that American trading prohibitions, like those used against Iran, could make it very hard indeed for Putin’s friends to do business anywhere. Strong European sanctions might just turn this into Putin’s Suez: an expensive but not disastrous mistake. But if sanctions don’t dissuade him or, worse, are not imposed until it is too late, Russia will face an immediate and terrible war.

Radek Sikorski, Poland’s foreign minister, did not exaggerate when he said the "gates of Hell" would open. Ukraine will fight, if necessary alone, and trap Moscow in a guerilla quagmire. Putin can invent refugees that don’t exist; he can hide the fact that there would be no cause for the war he will have started; but he can’t hide Russian boys coming back without legs, or hands, or not coming back at all. Nor can he hide from their mothers when they come for him. His days in power will be sleepless, bloody and few.

*[This article was originally published by ConservativeHome.]