In a 2018 government declaration, German Chancellor Angela Merkel reacted to growing voices within her party who questioned her policies during the refugee crisis by stating that “There is no question that the historical character of our country is Christian and Jewish. But … with 4.5 million Muslims living with us, their religion, Islam, has become part of Germany.” Back in 2015, her government decided to suspend the EU’s Dublin Regulation and process asylum applications from refugees fleeing war-torn Muslim-majority countries. This challenged society as the potential problems of the (cultural) integration of Muslims dawned on many Germans.

Divisions within society, with some welcoming Germany’s worldly alignment and others fearing super-alienation, mirrored themselves within Merkel’s ruling Christian Democratic Union (CDU) and the sister party, the Christian Social Union (CSU). The refugee crisis heated up a dilemma the CDU has grappled with for years: Can Muslims belong to Germany and a conservative Christian democratic party?

Party colleagues instantly rebuked Merkel’s comments. Most prominently, Horst Seehofer, the home secretary in her cabinet who had previously insisted on speeding up deportations of rejected asylum seekers, corrected Merkel by saying that “Muslims who live with us obviously belong to Germany,” but this “does not mean we give up our country-specific traditions and customs out of a misplaced consideration for others.” The CDU/CSU’s struggles to find consensus in assessing the status of Muslims in Germany have been long-running. But why is it a subject of debate at all?

Whether the CDU/CSU likes it or not, between 4.4 and 4.7 million Muslims currently live in Germany, making up 5.4% to 5.7% of the population. Therefore, Muslims are an inevitable subject of debate for the CDU/CSU for both interest-based and ideological reasons. The growing number of Muslims in Germany is of interest-based significance for the CDU and a chance to secure future electoral success. Some 1.5 million Muslims, or 2,4% of all voters, are eligible to vote, making them a sizeable electoral group.

Traditionally, Muslims harbor affiliations with center-left parties. Nevertheless, the CDU/CSU has discovered a vital interest in appealing to Muslim voters, as Andreas Wüst, a political scientist at Stuttgart University, indicates: “Merkel brought in a different wind by emphasizing the importance of the immigration society. In the meantime, efforts are also being made in the CDU to support Muslims.” Already in 2004, Bülent Arslan, former chairman of the CDU’s German-Turkish Forum, stressed that “around 50 to 60 percent of the Turks living in Germany are conservative. That is also a potential for the CDU.”

The second reason for intra-party discussions is the ideological orientation of the CDU/CSU. As a self-proclaimed catch-all party of the center-right, its core voters wish to preserve the ethnic makeup of society as well as the social values and religious beliefs associated with the Roman Catholic and Protestant traditions. Thus, Muslims challenge two pillars of conservative thinking: the traditional ethnic constitution and religious imprint of German society.

With its roots in political Catholicism of the 18th and 19th centuries, the CDU was founded in the aftermath of the Second World War as a non-denominational party, incorporating Catholic and Protestant Christians into its structures. Preserving these roots while remaining an urbane party is a balancing act the CDU/CSU has struggled with over the last two decades. The party manifesto and policy still reveal anti-Islamic tendencies. In the latest party manifesto, the terms “Islam,” “Islamism” and “Islamist” appear only nine times. Moreover, they show up exclusively in the context of dangers such as Islamic terrorism and fundamentalism.

Further evidence for the CDU/CSU’s skeptical attitude toward Islam is the long-raging debate in Germany about Muslim women wearing headscarves. Between 2004 and 2006, eight of Germany’s 16 federal states introduced a headscarf ban for female teachers in public schools and for public servants. The CDU/CSU governed six of them at the time. In 2019, the CDU leadership proposed that Muslim girls shouldn’t wear headscarves in nurseries and primary schools because “Wearing a headscarf makes little children recognizable as outsiders. We want to prevent this from happening in any case.”

Another debate in 2019 revealed further divisions within the CDU regarding its attitude toward Islam. It was triggered by the party whip in the German parliament, the Bundestag, Ralph Brinkhaus. When asked the question if a Muslim chancellor from the CDU/CSU in 2030 would be conceivable, he replied, “Why not?” — as long as he is “a good politician” who “represents the values ​​and political views of the CDU.”

Adverse responses came in thick and fast. According to Christoph de Vries, a CDU spokesman for internal affairs, “Whoever stands for the CDU/CSU as chancellor does not have to be Christian, but must represent Christian Democratic values ​​and feel a part of Germany. Unfortunately, this does not apply to a larger proportion of Muslims who emulate religious fundamentalism and feel attached to foreign heads of state.”

Still, party colleagues, like the undersecretary for integration in North Rhine-Westphalia Serap Güler, leaped to Brinkhaus’ defense: “Ralph Brinkhaus’s answer simply made clear that in the CDU no one is placed at a disadvantage because of his beliefs as long as he represents our values ​​and political views.”

Angela Merkel couldn’t take her party along in her progressive outlook on the status of Islam in Germany. The CDU/CSU remains torn between two attitudes: first of all, recognizing that Germany is an immigration society and, secondly, attempting to preserve its Christian roots and win back conservative voters. Many of them have switched allegiance to the Alternative for Germany (AfD) — a party that has thrived on anti-Muslim populism.

This predicament continues amid the current debate over the succession of party leader Annegret Kramp-Karrenbauer. She stood for the liberal course set by Merkel but failed to stamp her authority on the party. Conservative circles within the CDU are now pinning their hopes on Friedrich Merz, the former party whip who was driven out by Merkel in 2002 and is now pledging to win back voters from the AfD. Any outcome of the leadership race would only paper over the cracks of the debate over whether or not Muslims can truly belong to Germany and its conservative ruling party.

Perhaps the wavering attitudes and mixed messages were the results of equally ambiguous leadership. While recognizing Islam as a part of Germany, Merkel simultaneously sowed mistrust in a multicultural society in 2010 by declaring that “The approach of multiculturalism has failed, absolutely failed!” It seems that the CDU is neither willing nor capable of providing a coherent answer to its internal dilemma concerning Islam. It welcomes Muslim immigrants while mistrusting their culture, appealing to Muslim voters while being outraged by the prospects of a Muslim head of state. The reality of Germany as an immigration society and 4.5 million Muslim citizens is clear-cut and stark. The CDU/CSU’s attitude toward this reality isn’t. 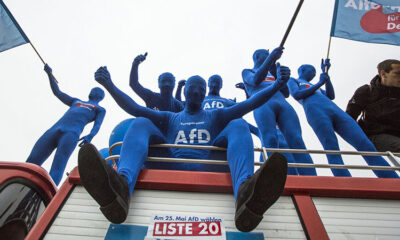 Centre for Analysis of the Radical Right, April 7, 2021 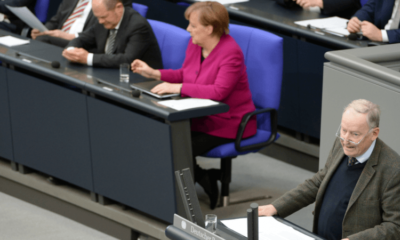 Alternative for Germany and the Myth of National Rebirth